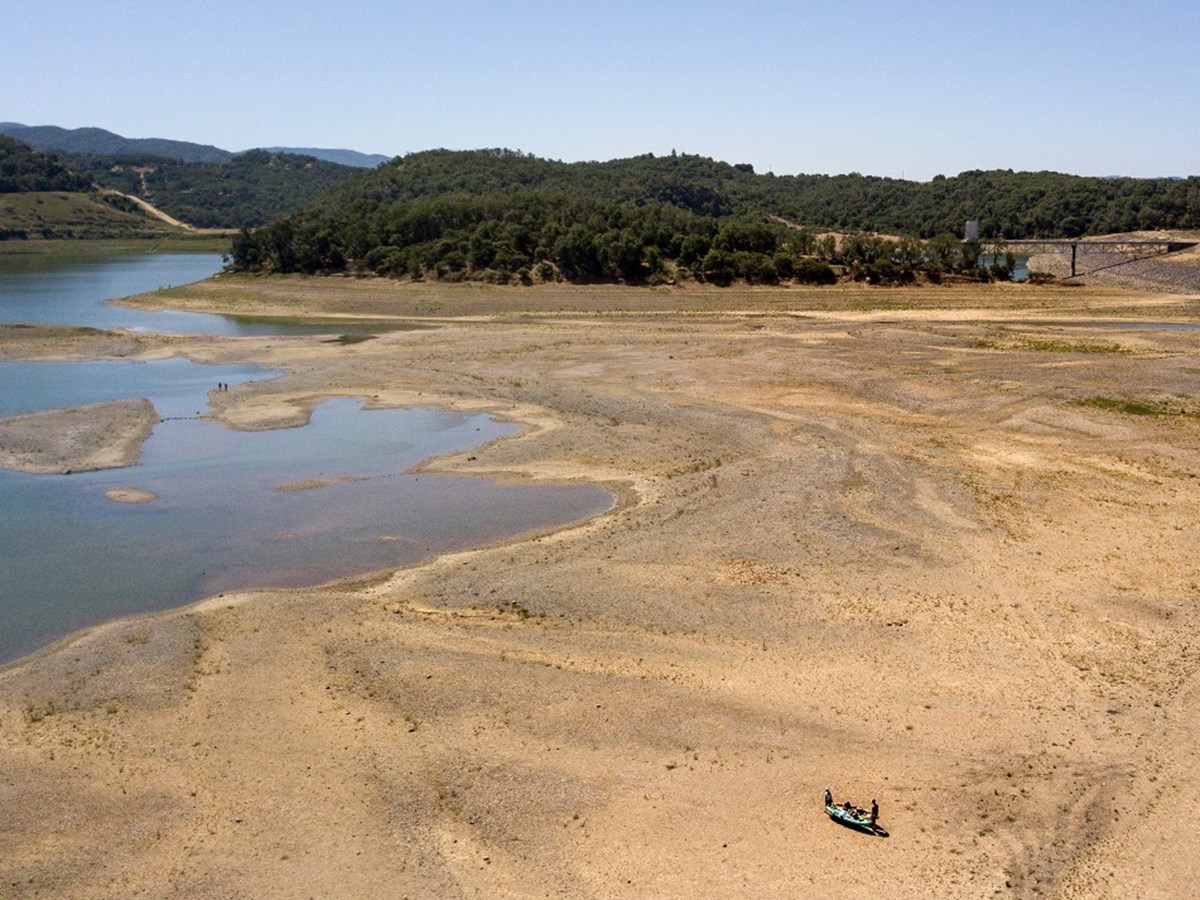 Kayakers make a long trek to the water's edge at a drought-stricken Lake Mendocino, currently at 29% of normal capacity, in Ukiah, Calif., Sunday, May 23, 2021. California Gov. Gavin Newsom declared a drought emergency for most of the state.

As the state experiences its second-driest year on record and Gov. Gavin Newsom declares a statewide drought emergency, some Californians may be wondering: How will this shortage impact the Sacramento region and what does it mean for our everyday lives and water supply?

The declaration comes after a summer of record-high temperatures alongside plummeting water levels in reservoirs. With his announcement, Newsom cited these factors as more reason to “redouble our efforts” toward water conservation.

Experts agree. “It sounds a little bit odd at first to have a drought declaration declared at the beginning of the rainy season,” said Jay Lund, co-director of UC Davis’ Center for Watershed Sciences. “But given the state of the reservoirs and the likelihood of the drought continuing next year, I think it's prudent to help people get prepared.”

The conservation messaging from California officials began in earnest back in July, when Newsom urged residents to voluntarily reduce their water usage by 15%. At the time, state water officials reported that California had only reduced its usage by 1.8% compared to July of the previous year, indicating a need for major improvement.

Alongside Tuesday’s announcement, officials announced a slight uptick, reporting that the state had reduced its water usage by 5% in August compared to August 2020.

This is only the beginning. For Northern California and the Sacramento region, the road ahead will require planning for more water conservation as the state enters what’s expected to be another dry year.


What does a drought emergency mean for the Sacramento area?


Lund looks to Folsom Lake as one cause for concern. Like those throughout the state, this reservoir has experienced plummeting water levels.

Jessica Law, executive director for the Water Forum, said that water districts in the Sacramento region have relied more heavily on groundwater resources than surface water like Folsom during the drought, since the former is currently more reliable.

But either way, Law said that these systems all depend on rainfall to stay stocked up — which has been in short supply.

“We really need a tremendous amount of precipitation coming in as snow, as rain, throughout the system to really get us back up to even normal or average levels,” Law said of the possibility of lifting the drought emergency next year.

So far, Law said the Sacramento region’s groundwater resources have supplied the region well, and the region will likely be fine through 2022. But long term, she says that local water agencies will have to make further investments in groundwater infrastructure to supply the region.

And even though Sacramento has recently seen rain and might see even more in coming days, Law said it’s important to remember that it doesn’t mean that we’re out of the drought.

“It's important for everyone to really be paying attention to the water that they're using to try and cut back as much as possible,” Law said. “It's good that we've got some precipitation, but we're still overall … preparing for the worst and then hoping for the best.”

Lund expects that residents will see local mandates for water cutbacks next year.

“I think you should be preparing to have mandatory restrictions on lawn watering next year,” he said. “That seems like a fairly likely thing.”

What does it mean to declare a statewide drought?


Emergency declarations like the one Newsom made on Tuesday are generally used to encourage water conservation when the state is experiencing worsening drought conditions — and also to help local water suppliers prepare for a drier year ahead.

Aside from announcing a state of drought for all counties in California, Newsom’s declaration allows state water regulators to ban “wasteful water practices,” like using drinkable water to hose down sidewalks or for street cleaning.

Newsom’s declaration is not a mandate; it asks for voluntary cutbacks while offering assistance to local agencies in preparing for 2022.

Lund describes this declaration as a stepping stone for action on a local level.

What happened last time a drought emergency was declared in California?


In 2015, California was amid its fourth consecutive year of drought when Gov. Jerry Brown declared an emergency. This declaration came with a conservation mandate that required cities and towns throughout the state to reduce their water usage as a whole by 25%.

This was the first-ever instance of statewide, mandatory water reductions in California.

Usually, mandates are dictated on a local level, rather than prescribed to the state as a whole. Brown’s mandate allowed for reductions anywhere from 8% to 36% based on a community’s per-capita water use and reached its goal later that year.

Heather Cooley, director of research for environmental nonprofit Pacific Institute, said that she sees a possibility for another statewide mandate if the state misses its target for water reduction in coming months.

Before Brown’s mandate, Cooley said that he had also issued a call for voluntary cutbacks. When the state’s goal for water use reductions weren’t met, he followed it up with the mandate.

“I suspect a very similar thing will happen here, that as conditions get even worse and as those voluntary recalls are not met, it will eventually lead to a mandate,” Cooley said.

For now, Lund expects that local water agencies will take the next few months to prepare and eventually create mandates based on drought impacts in their area.

“This will allow some of the urban areas to increase their amount of water conservation, even over the winter when the water use isn't very high,” Lund said. This allows agencies the option of “stepping things up slowly in case they're needed for next year — which is fairly likely.”


What should people do to conserve water now?

But beyond actively cutting back on day-to-day water use, Cooley said that individuals can make structural changes to their homes that will reduce water use long term. That can include replacing water-thirsty lawns with vegetation that require less watering, or swapping out old showerheads for a model that is more efficient.

“I think people automatically go to the shorter shower and the not-flushing, and those strategies certainly [save water],” Cooley said. But other measures, like replacing old appliances with newer models that are more efficient in their water usage, can save, she explained.

With concerns for the impacts of climate change ahead, Cooley said that Californians should expect more years of drought that will require long-term reductions in water use. Taking action now will help alleviate the burden later, she said.

“In each of these droughts, we take more and more steps to eliminate water waste,” she said. “And then that better prepares us for the next drought.”