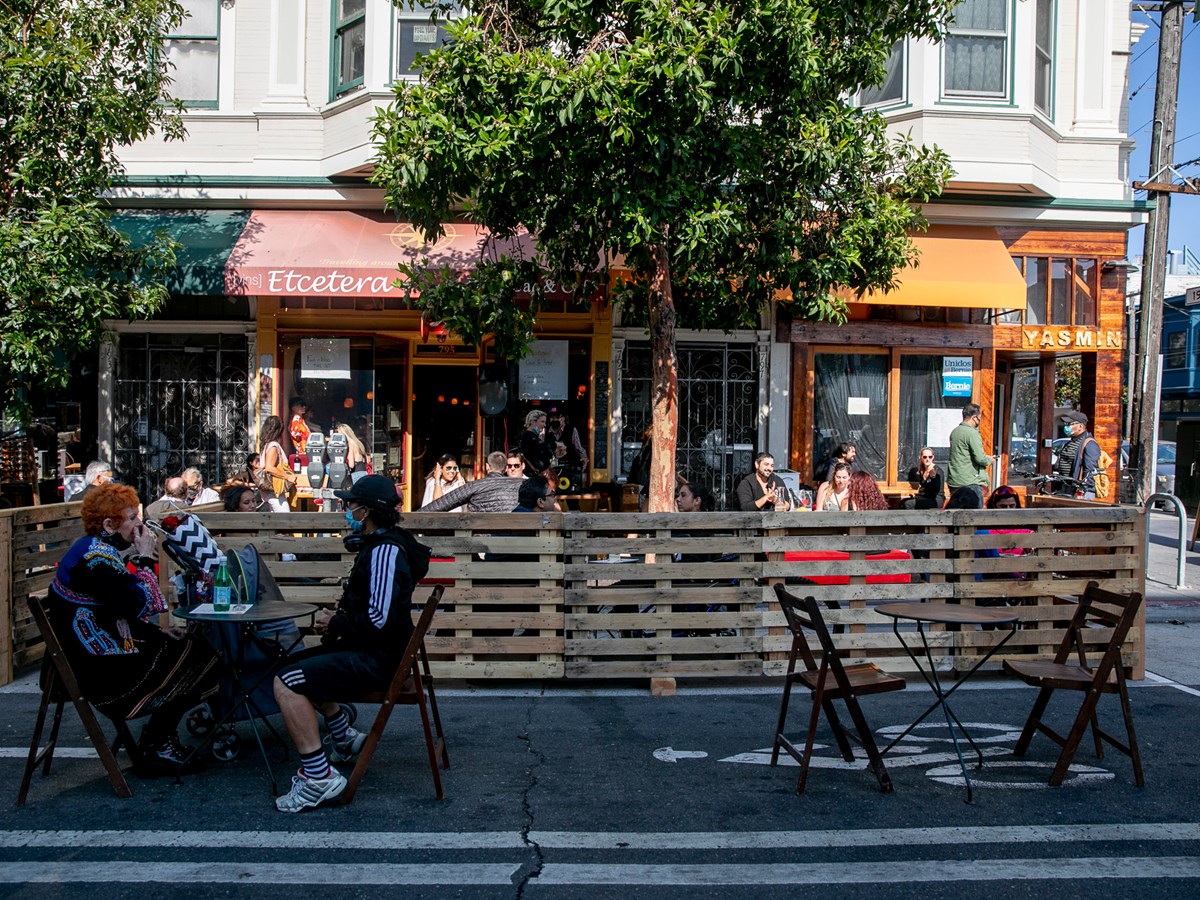 Restaurant patrons sit in a parklet along Valencia Street in San Francisco on July 25, 2020. Since last July, Valencia Street has been shut down to traffic on the weekend to allow for additional outdoor activity.

When Los Angeles shut down indoor dining, DK Marikan did everything in his power to reinvent his 28-year-old Mediterranean restaurant and deli to keep it afloat.

“At some point we only did to go, and that was nothing. Nobody wanted to come,” he said of Garo’s, a staple with downtown workers and residents who would hang out and linger over Greek salads and pastrami sandwiches. “Maybe 10% of our business was to go. That’s it.”

Once the city allowed businesses to expand dining onto sidewalks and streets through its Al Fresco program, Marikan went all in, investing nearly $8,000 on cafe chairs and awnings. He called outdoor dining a lifeline.

Now, even as the state prepares to lift all COVID-19 restrictions on June 15, some pandemic changes such as outdoor dining and to-go drinks will likely remain in many California cities — and many small business owners are embracing the proposed extensions. Gov. Gavin Newsom today announced extending those restaurant extensions through the end of the year.

Today, we’re announcing that CA will allow outdoor dining expansions and to-go cocktails to stay after we fully reopen on June 15! 🍽️🍸 pic.twitter.com/EP1JMa2GJz

“It’s going to bring in a lot of people because, I want to say 90% of our customers, they don’t want to dine indoors anymore. They want to be outdoors,” Marikan said of LA’s proposal to make its outdoor dining program permanent. “We would love to see this be permanent. I pray they do it.”

When the pandemic ravaged businesses across the country, it hit the restaurant industry especially hard. The California Restaurant Association last August warned that of the 90,000 restaurants operating in the state, at least 30% would close without significant government aid. As California counties and cities prepare to reopen entirely to pre-pandemic capacity limits, state and city leaders are exploring ways to permanently adopt some of the emergency measures.

Two bills making their way through the state Legislature, one in the Senate and one in the Assembly, aim to permanently allow restaurants to sell to-go alcoholic beverages. And several cities across the state are voting on whether to extend or cement their outdoor dining programs.

“We haven’t been able to operate at full operations in over a year, so anyone still hanging on is barely hanging on. So every piece of possible revenue is going to be critical,” said Matt Sutton, senior vice president of government affairs and public policy at the restaurant association. “The restaurant recovery has not started. It won’t start ‘til after June 15 and it will need a long runway.”

“To say it was devastating to the restaurants would be an understatement,” Dodd said. “I know a lot of locals tried to take out as much as possible. But when you really look at it in these restaurants, it’s almost like these food bills are half or two thirds of the whole bill and the rest is alcohol sales.”

Dodd said local business owners began approaching him asking him if there was a chance that to-go drinks could remain after the pandemic both because of their success, and the fact that residents have grown fond of the option.

“It’s not like that was the silver bullet, the thing that’s going to make or break them. It was a contributor to the bottom line for sure,” he said of the to-go option. “This could be something that would not only help the industry, but maybe it’s something that the consumer really wants.”

Dodd’s bill passed unopposed out of the Senate and is now being heard in the Assembly. Alcohol Justice, an industry watchdog group, is the main opposition to the legislation and argues that the bill could threaten public health and safety by increasing drunk driving.

During the pandemic, 33 states and the District of Columbia allowed to-go sales of alcohol, including spirits and cocktails or cocktail kits. A study by Technomic, a food service research firm, found that 58% of consumers said the ability to purchase alcoholic beverages with their take-out orders impacted their choice of restaurant.

Sutton said the to-go drinks program should be expanded.

“If you had a pilot project and it was successful, you continue it for a number of years further,” he said. “We think it’s the sweet spot.”

Studies have shown that restaurant goers prefer dining on quiet streets. So a bill introduced by Assemblymember Adrin Nazarian, a Democrat from the LA neighborhood of Sherman Oaks, would permanently allow cities the option of restricting traffic. Also passed unanimously out of the Assembly, the “slow streets” bill is written to target larger cities such as Los Angeles and San Francisco and aims to build off the success some communities experienced when restricting thru traffic.

While Nazarian said his bill is mostly focused on the public health and safety benefits, he’s been approached by business owners in San Francisco who also want to find a way that the bill could benefit them. A study by Yelp found that safer streets initiatives that closed off areas to vehicular traffic drove increases in business for restaurants. The study specifically saw spikes in business in San Francisco’s Valencia Street and Burbank’s San Fernando Blvd.

“It’s hard to pinpoint a good thing that came out of the pandemic,” said Nate LeBlanc, business development manager of the San Jose Downtown Association. “It’s just silly that it took something of earth-shattering magnitude to let people put tables on the sidewalk.”

San Jose is one city that recently voted to extend its Al Fresco dining program until the end of the year.

LeBlanc said the Al Fresco program, first passed as an emergency order through the city, makes it easier for restaurants to obtain permits to put tables and chairs in public spaces such as sidewalks and empty parking lots.

In addition to LA, other cities that have or are considering expanding outdoor dining programs include San Francisco and San Diego.