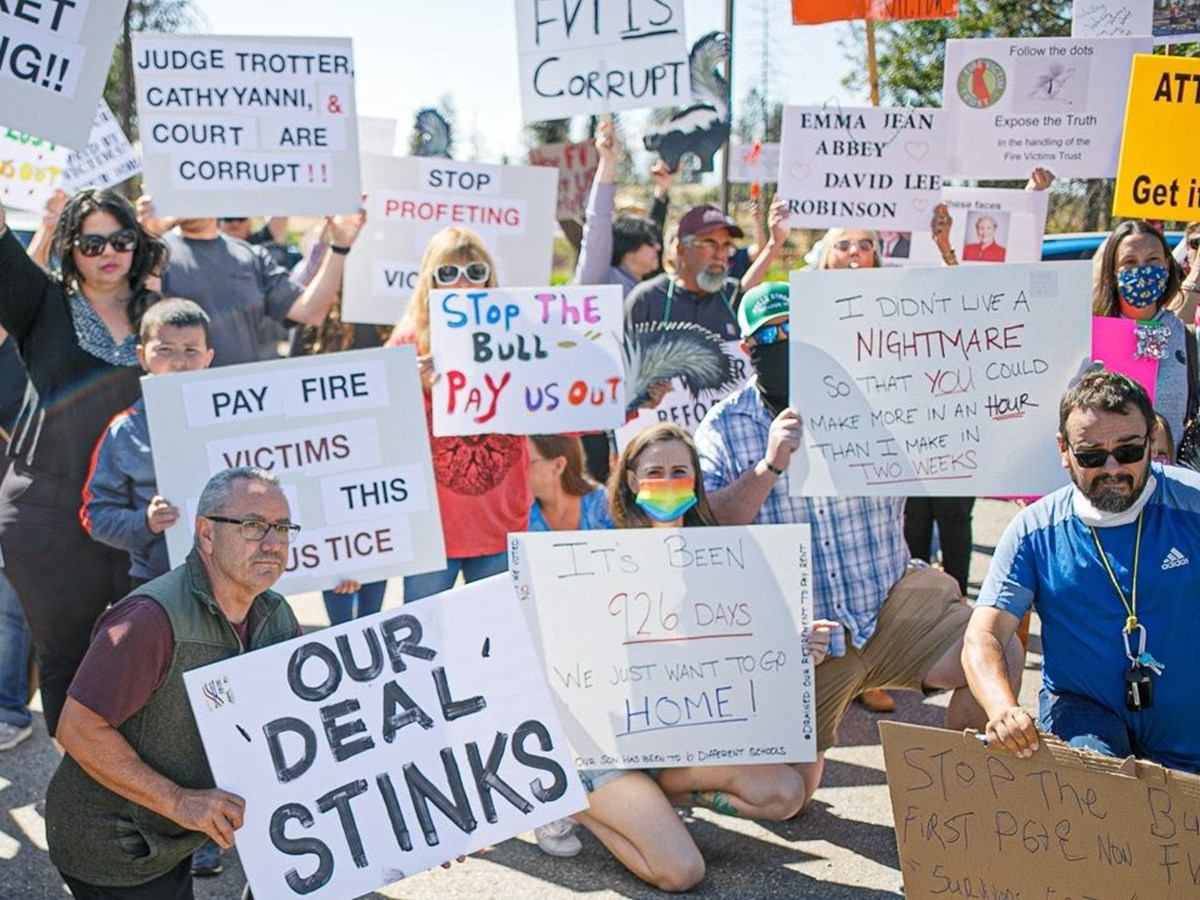 Survivors of the 2018 Camp Fire gather in Paradise, Calif. May 22, 2021 to protest runaway overhead expenses by the PG&E Fire Victim Trust.

PARADISE, Calif.  -- Teri Lindsay said she had no intention of speaking at a fire survivors’ rally that drew about a hundred people to the Skyway in Paradise Saturday. But as her daughter, Erika, stood by her side — tears streaming down the young girl’s face — Lindsay voiced her frustration at her family’s living conditions 2.5 years after the 2018 Camp Fire.

“Everytime she sees smoke, she cries. She can’t heal until we can go home,” Lindsay said of Erika, who was seven when the 2018 Camp Fire destroyed their house, and thousands of others in Paradise. The fire was caused by equipment belonging to PG&E. They’ve been living in a trailer overlooking a branch of Lake Oroville ever since. 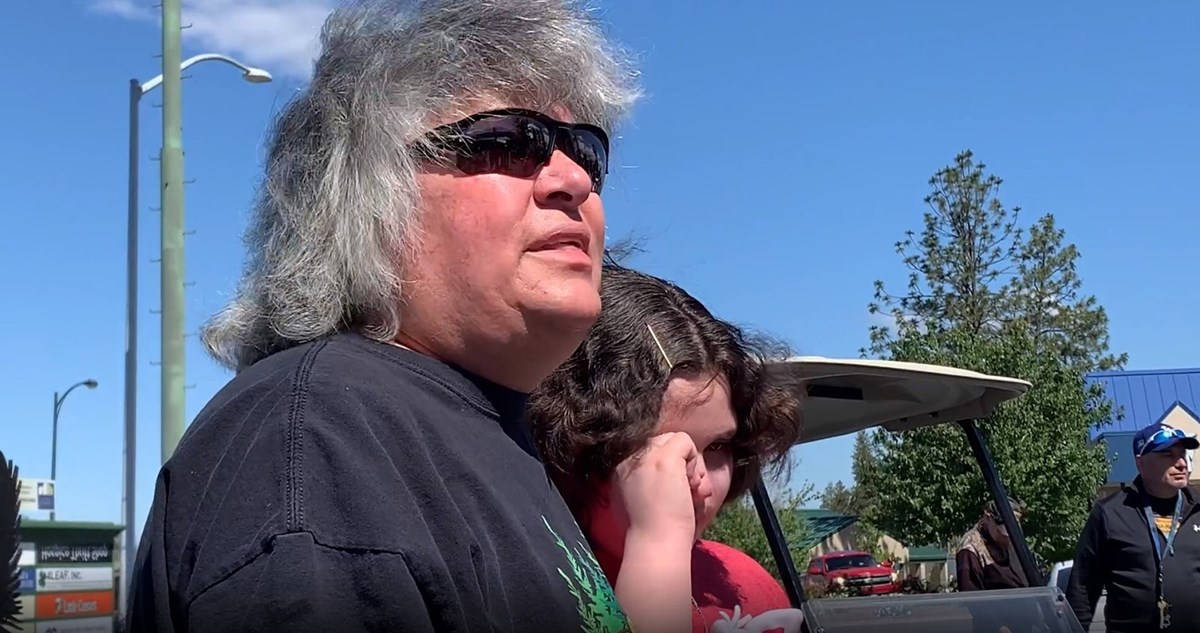 Teri Lindsay with daughter Erika, speaks at a rally in Paradise, Calif. May 22, 2021. They lost their home in the 2018 Camp Fire.Lily Jamali / KQED

Like the vast majority of the 70,000 fire victims of PG&E fires caused between 2015 and 2018, Lindsay has not yet received any money from the Fire Victim Trust. The Trust was set up last year to distribute billions of dollars as part of a settlement between fire survivors and PG&E.

Lindsay said she was motivated to join this weekend’s rally after reading a KQED investigation, published earlier this month, which showed that the Fire Victim Trust racked up $51 million in overhead costs last year, while distributing $7 million to fire victims during that period. The investigation was based on KQED’s analysis of federal bankruptcy court filings, court transcripts and correspondence between the Fire Victim Trust and fire victims.

At the end of last year, fire victims had received less  than 0.1% of the approximately $13.5 billion they were promised.

“I thought that I was healing. Until that report came out, it changed my life and took me back to the day. I did not realize how well they're being paid and we’re living in squalor still,” Lindsay said.

“The trust didn't create the settlement,” Trotter said. “We're still walking uphill on this. We're not near the top yet. We're making progress. We're getting there. When we get to the top and down the other side, it will go much more quickly."

According to the Trust, the pace of payments is picking up — with about $255.4 million distributed as of May 19. But, even then, only 565 of nearly 70,000 eligible families had their claims processed and paid, according to the data. In addition, those families are getting 30% of what they're owed while the Trust collects its own fees in full. Every dollar spent on overhead comes out of the fund for fire victims. One court filing, unearthed by KQED showed Trotter charged the Fire Victim Trust $1,500 an hour. In the video, he said he had taken a pay cut — to a “very adequate” salary of $150,000 a month.

The 30% payment structure is partly a result of the terms of PG&E’s settlement with fire victims. The company has funded the Trust half with cash and half with PG&E stock. The arrangement, which has few precedents, made the fire victims major significant shareholders in the utility and has complicated the task of administering the Trust, experts say. 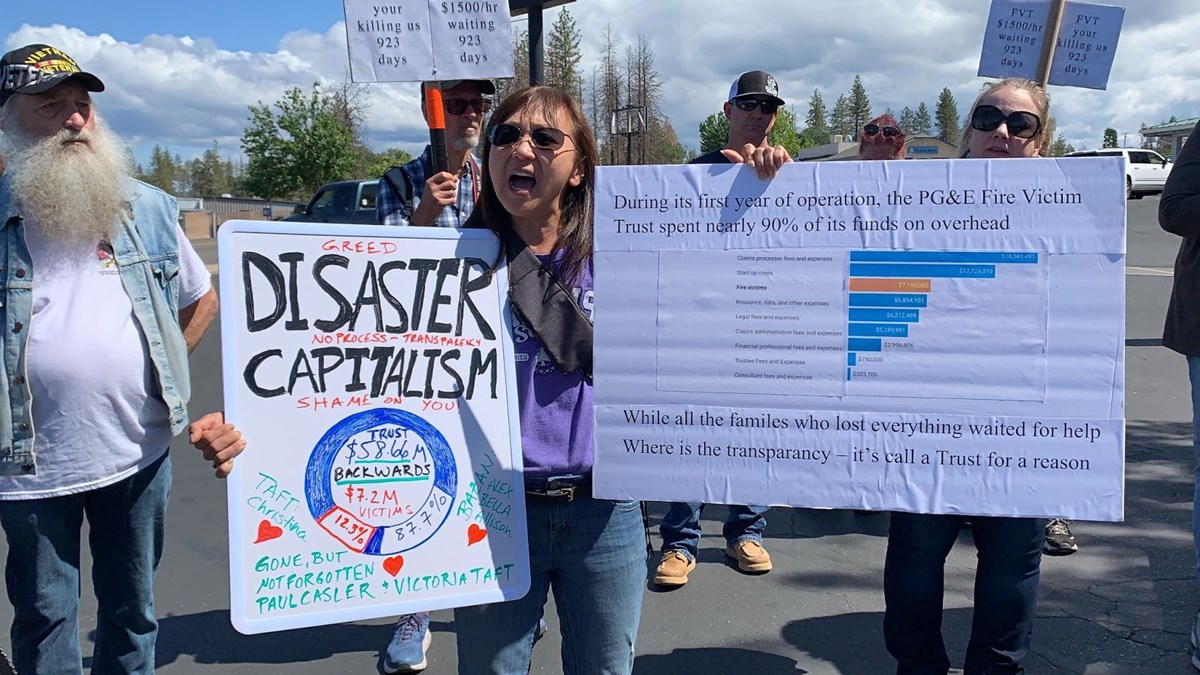 Angela Casler at a rally in Paradise, Calif. Held on May 22, 2021 to protest runaway overhead expenses incurred by the PG&E Fire Victim Trust.. She lost her father-in-law shortly after the Camp Fire.Lily Jamali / KQED

Since KQED’s investigation, members of Congress from both parties have demanded action.  In separate emails, Rep. Mike Thompson, a Democrat, and Doug LaMalfa, a Republican both called for faster payouts. James Gallagher, a state Assemblyman who represents Paradise, says KQED's investigation "raises a lot of questions and concerns that need answers." In an interview on KQED Forum this week, Gallagher said he and his colleagues were preparing a letter calling for more transparency.

"Stating fire victims are languishing is an understatement," he added. "I request you speed up the process to a sprint-like manner and direct the [Fire Victim Trust] to provide transparency and accountability”

At Saturday’s rally, Camp Fire victim Sasha Poe reiterated those calls, saying survivors have the right to know where all of those administrative dollars are going.

“The Trust is set up for fire victims,” said Poe, who joined the rally along with her husband and children. “Yet so many months and years down the line, fire victims haven't seen much.”