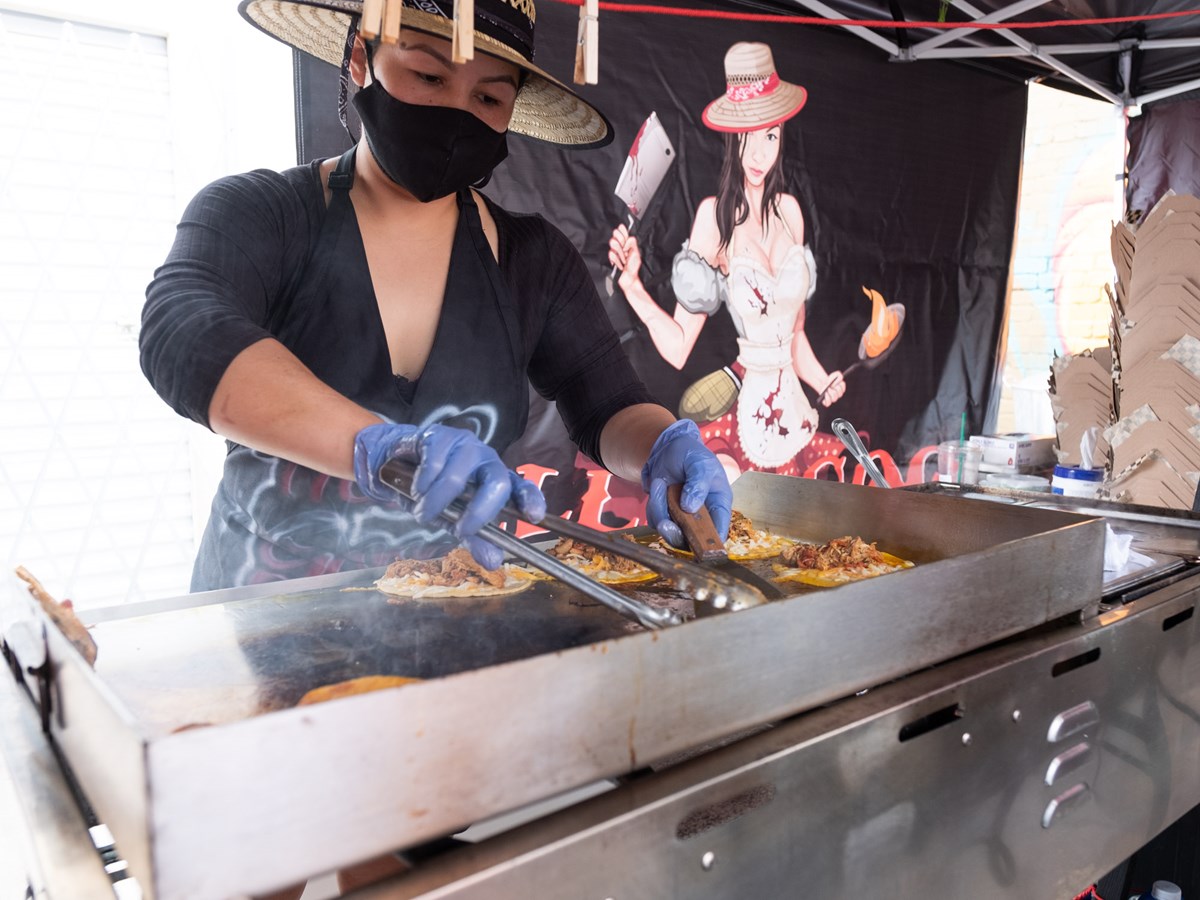 People connect through food. Whether that’s breaking bread across cultures or sharing the warmth of a family recipe, food connects people to memories worth savoring.

During a pandemic, the way in which people use food to connect changes.

In Sacramento, everyone from professional chefs to home cooks and cottage bakers rely on social media as a means to introduce people to their food. It’s a simple way to post weekly pop-up menus filled with photogenic bites that are quickly devoured by die-hard followers.

“It's like a treasure hunt. People like this speakeasy culture where you have to know about it,” says Claryssa Ozuna, owner of Hella Good 916, a weekly pop-up that specializes in quesabirria tacos and homemade tres leches cakes — all of which sell out just as quickly as they’re made.

Ozuna shares Hella Good’s menu with more than 2,000 Instagram followers who pick-up orders on Friday afternoons. As a licensed caterer with over a decade of experience working in various kitchens — including fine dining to bars and cafes — Ozuna says she easily makes at least 300 tacos on pick-up days. 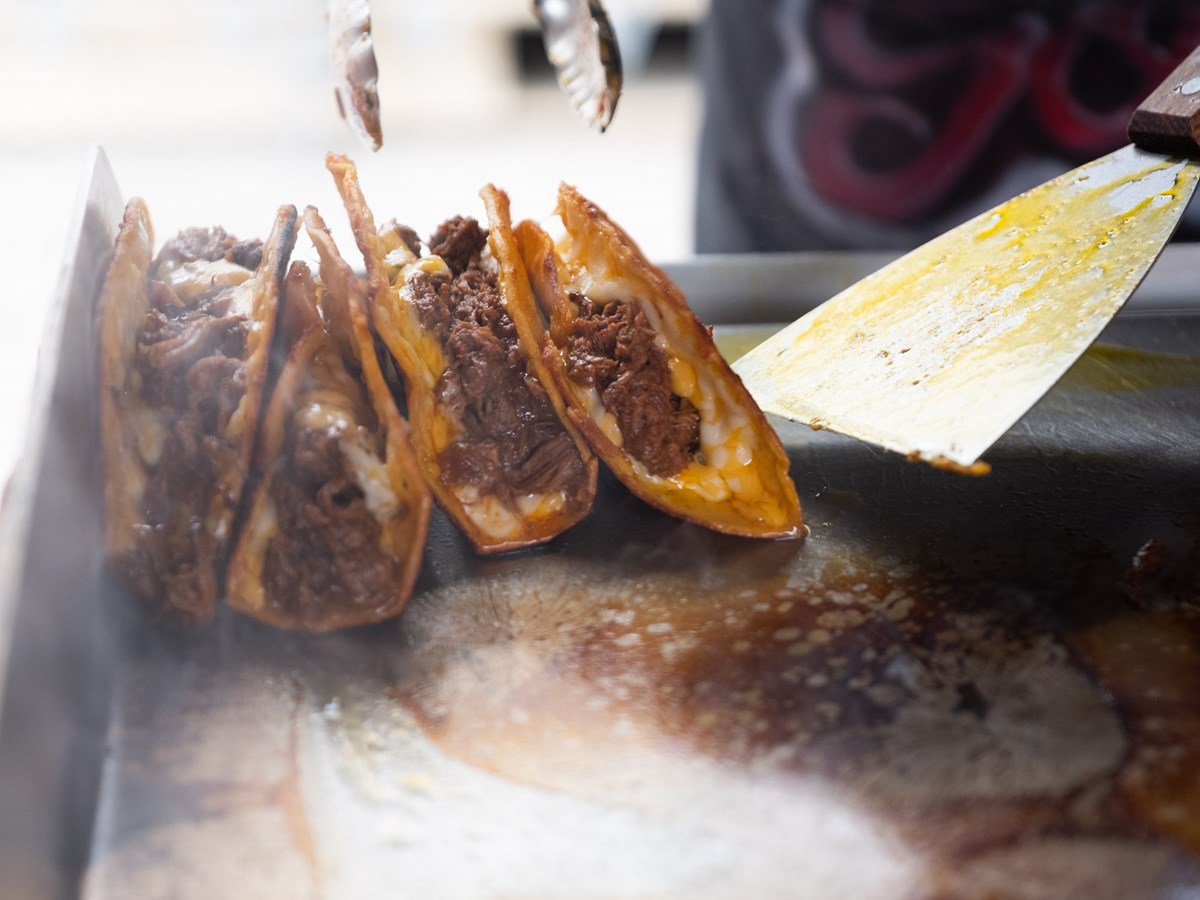 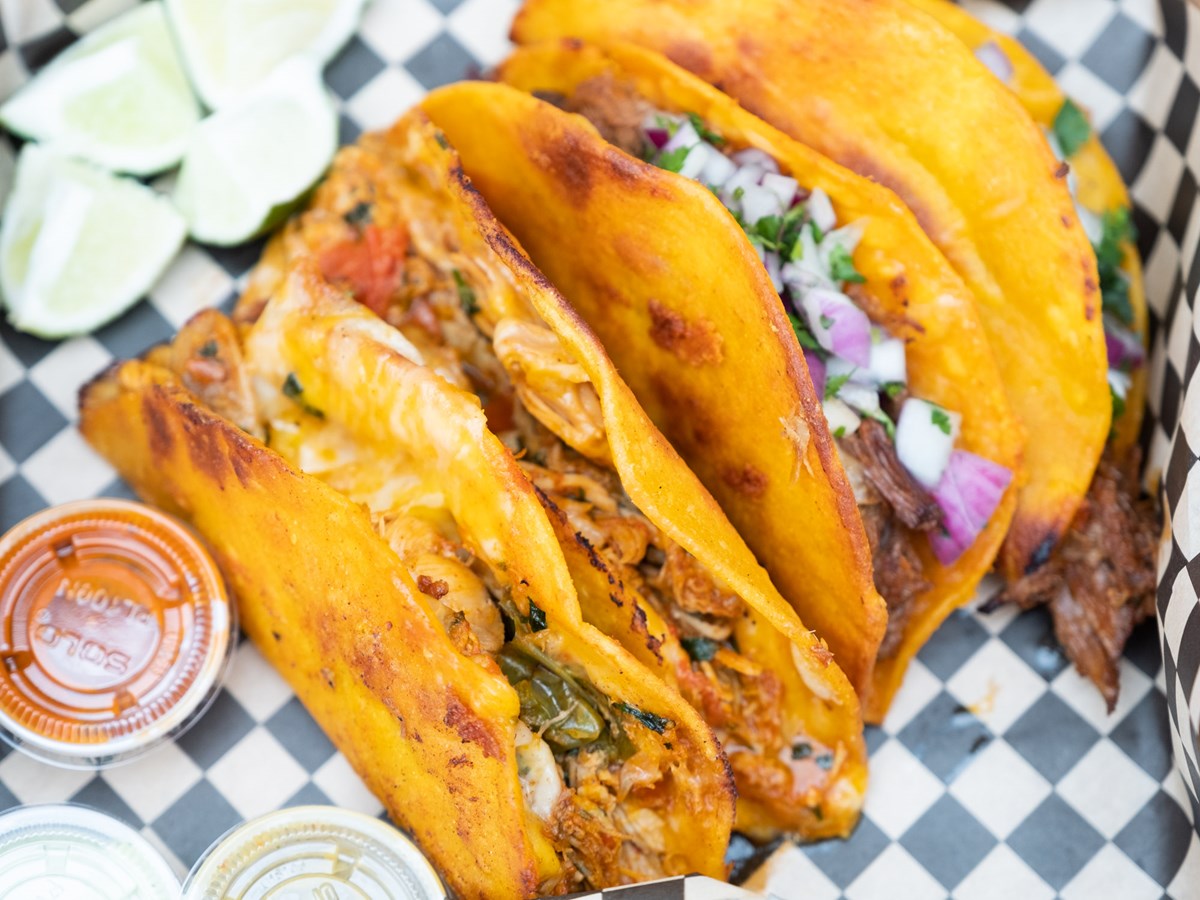 On those days, she sets up shop in South Sacramento, crisping rows of corn tortillas on the grill before covering each with mounds of shredded cheese and generous portions of savory, slow-stewed beef. It’s a crispy, melty, umami mouthfeel that’s enriched by dipping each bite in Ozuna’s flavorful consumé, a deep red, unctuous beef broth that smacks with warm spices.

“It gets pretty crazy sometimes, but I really love doing it,” she says. “I'm like the kind of person that loves to go, go, go. So, when the orders are flowing and we got a bunch of things going on, we’re thriving.”

This social media-influenced, pre-order business model is relatively new and has opened a path for many with big food dreams to cut overhead costs and break into the local industry on their terms. For these chefs and bakers, selling delicious fare was not only a way to make ends meet during the pandemic, but also a way to reach new people and offer a taste of who they are through their unique menus.

Underground, On Your Plate

Inside a small garage located in an industrial enclave near Track 7 Brewing Co., Ross Messier — aka “The Wonton King” — spends a Sunday afternoon in his art studio dishing out large orders of “goodie bags” filled with dozens of perfectly shaped frozen wontons and sides of sweet and spicy jalapeño dipping sauce.

“They were always a hit everywhere I've ever worked when I would put them on the menu,” says Messier, who’s worked as a chef in Sacramento for 20 years. “I just got to the point where I wanted to make something that I enjoy making all the time, that I know everybody likes, and keep it super simple.”

A post shared by The WONTON KING of Sacramento (@the_wonton_king)

He started making wontons as a way to bring home extra income during the pandemic when one of his cooking gigs was suddenly put on hold. But his side hustle quickly grew once Messier launched The Wonton King’s Instagram account last August.

At his busiest, this one-man assembly line will stuff, pinch and fold nearly 600 wontons in a variety of different flavor combinations to fulfill weekly orders.

“It's kind of like meditating for me while I'm making wontons,” he says. “I'm thinking, or I'm listening to music. I'm in my head, so I just let my hands do the work and my mind kind of drifts off to somewhere else.”

It’s a simple menu that’s helped the father of three stay afloat as restaurants endured the impacts of the pandemic. And while the service industry has surely taken its hits, those with a culinary backbone continued to find ways to express themselves through food.

Ger Her of Sactown Hmong BBQ is no different. In the early morning hours, while his family is still fast asleep, Her starts firing up two large smokers to ready 18 racks of ribs, 100 pounds of pork belly and about 40 pounds of Hmong sausage.

“On Fridays, I sell out. It’s a really busy day. I still work my construction job, but every chance I get, I try to sell barbecue,” Her says. “People, they love my ribs. My smoked pork belly, they’ve never had it like this before. I smoke it kind of like brisket, but it has a little twist to it. When you get the Hmong pepper sauce and dip it, it’s two combinations that just go together.”

To guarantee their plates, Her’s more than 1,500 Facebook followers message him on Thursdays when he drops his weekly menu that includes smoky meat combos served with a side of sticky rice and his homemade Hmong pepper sauce. 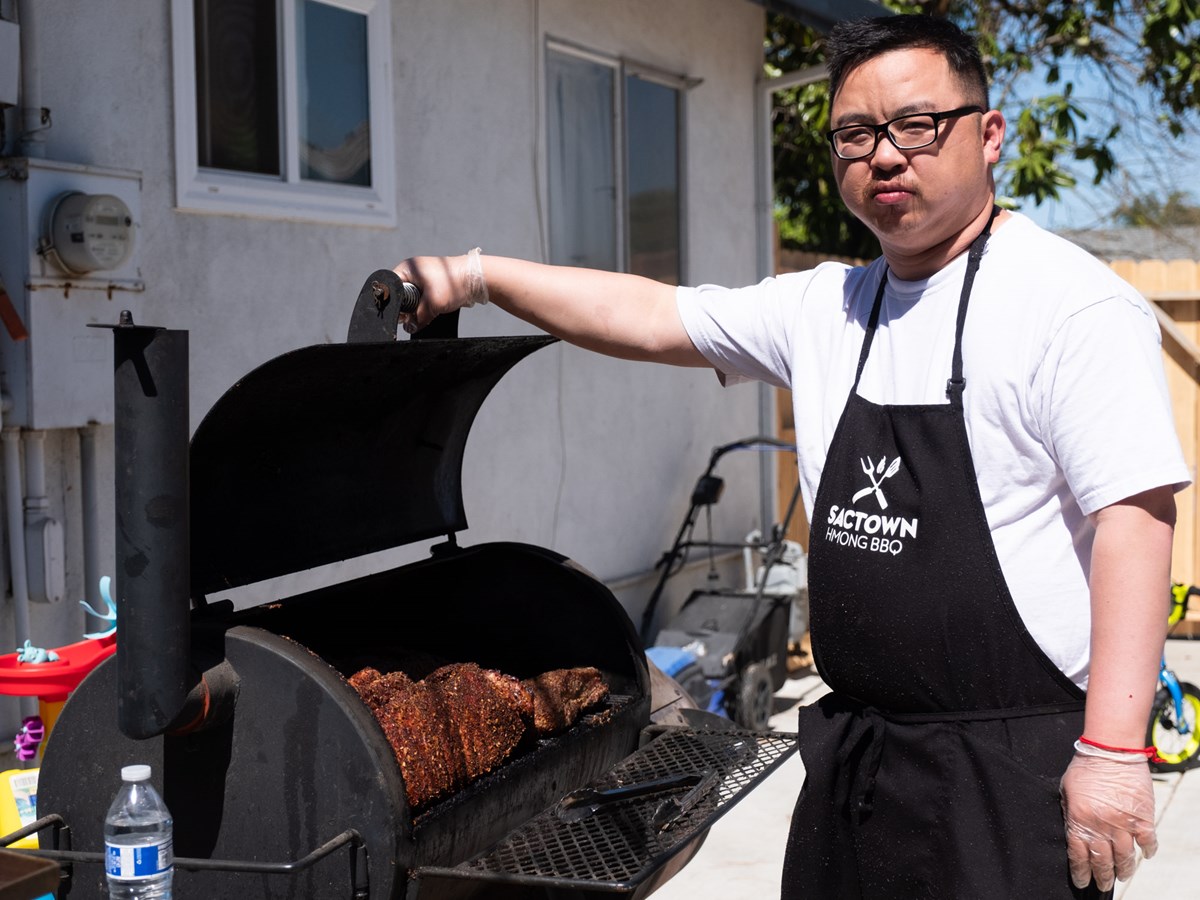 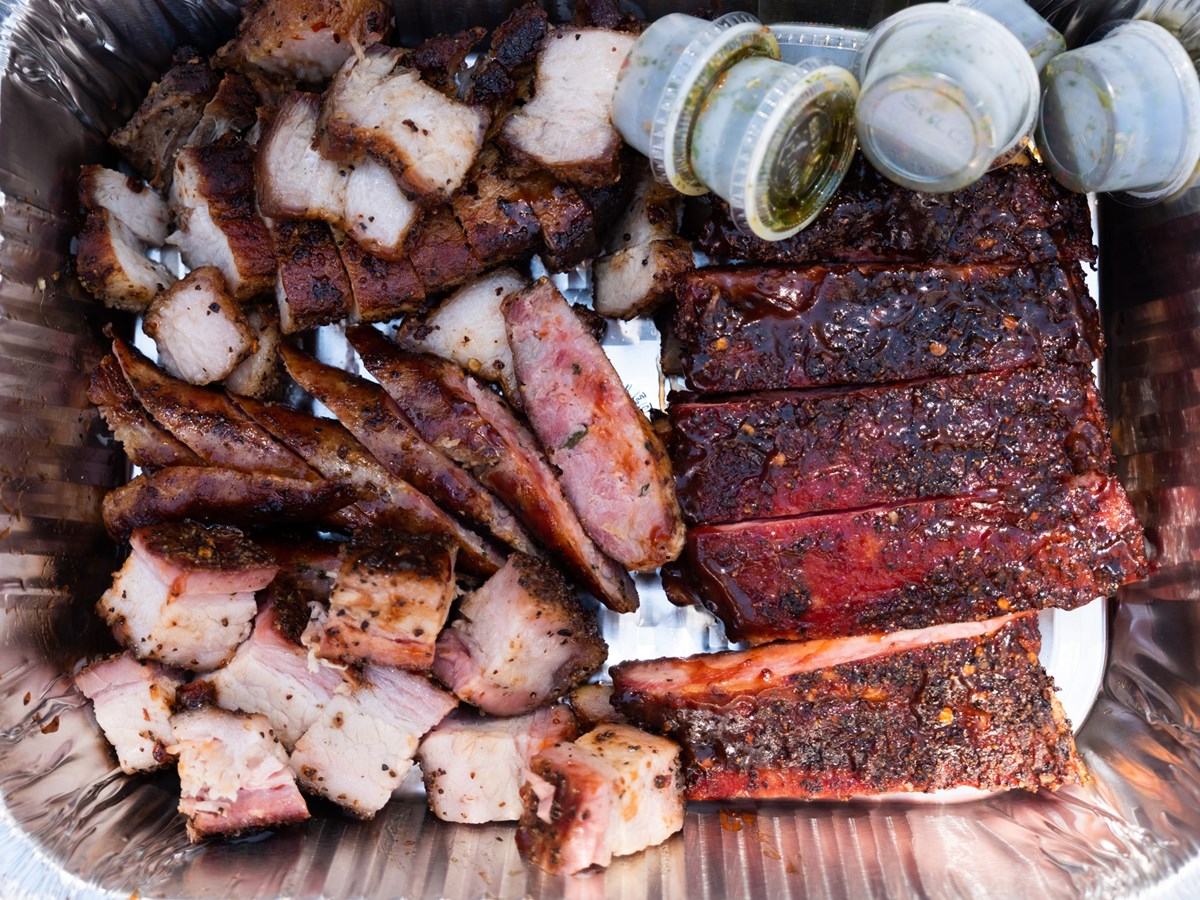 The pepper sauce alone should be bottled and sold in stores. Its spicy, salty, and sour notes tingle on the tongue before a wave of heat kicks in from the Thai chiles. Pair these bold flavors with a few bites of Hmong sausage with its lovely aromas of lemongrass and ginger — and it’s a lasting food memory.

“It's kind of like someone's home-cooked meal,” Her says of his slow-cooked barbecue. “If you weren't family, you probably wouldn't be able to get it, right? That's how I see it.”

For Duane Wilson, co-owner of Delta Hand Pies, he turned to his memories of growing up in South Carolina, eating his grandmother’s warm cinnamon-apple hand pies in the cool grass.

“I always like to go back to those kinds of comfort foods when I'm cooking at home, especially during the pandemic,” Wilson says. “It seemed even more interesting to relive all those old family recipes.”

Wilson started by making hand pies for close friends and family before teaming up with Jeremy White, chef and owner of Acoustic Events catering company.

Together, the two friends created new savory and sweet recipes like their Philly Cheesesteak Tribute with paper-thin Philly steak, caramelized onions, red and green bell peppers, and a creamy Provolone cheese sauce. There’s also Eureka Lemon with its bright citrus filling that’s like a cross between a lemon bar and a lemon curd. Each hand pie is wrapped in the most buttery, flaky crust that’s savored down to the last corner bite.

“Hand pies are really interesting because they're so unique. Every culture has something that is very similar to a hand pie,” Wilson says. “It's just comfort food that everybody understands.”

With more than 1,700 Facebook followers and a growing Instagram presence, Delta Hand Pies delivers up to 600 halfmoon pies to customers from Roseville and Rocklin to Elk Grove and even Galt.

For many small-batch businesses, satisfaction comes from people tasting something delicious and then sharing it with friends on social media, an instant way to stay connected to what’s new.

As a Bay Area transplant, Sam Leonard, a licensed cottage baker and owner of Better Half Bagel, was new to Sacramento and excited to break into the culinary industry when suddenly everything shut down.

So Leonard decided to turn his home into a bagel-baking test kitchen.

“I’ve always liked bagels because they're an everyman food,” Leonard says. “It's not pretentious. It’s relatable. You can get it on the go for breakfast, or you can gussy it up and make it fancy.”

He starts by rolling out up to 250 bagels at night before leaving them in the fridge to proof for two full days. This process allows Leonard’s bagels to develop their unique flavor and also a beautifully blistered, crackly crust.

On Sundays, Leonard sits in his driveway greeting new and repeat customers who stop by to pick up bags of bagels. Better Half Bagel is also sold at Taylor’s Market on Freeport Boulevard in Curtis Park.

“Because of the pandemic, and because I'm new to town,” Leonard says, “it's been really heartening to see people and meet them and talk to them in a way that isn't just rehashing all the ills that are going on in the world.”