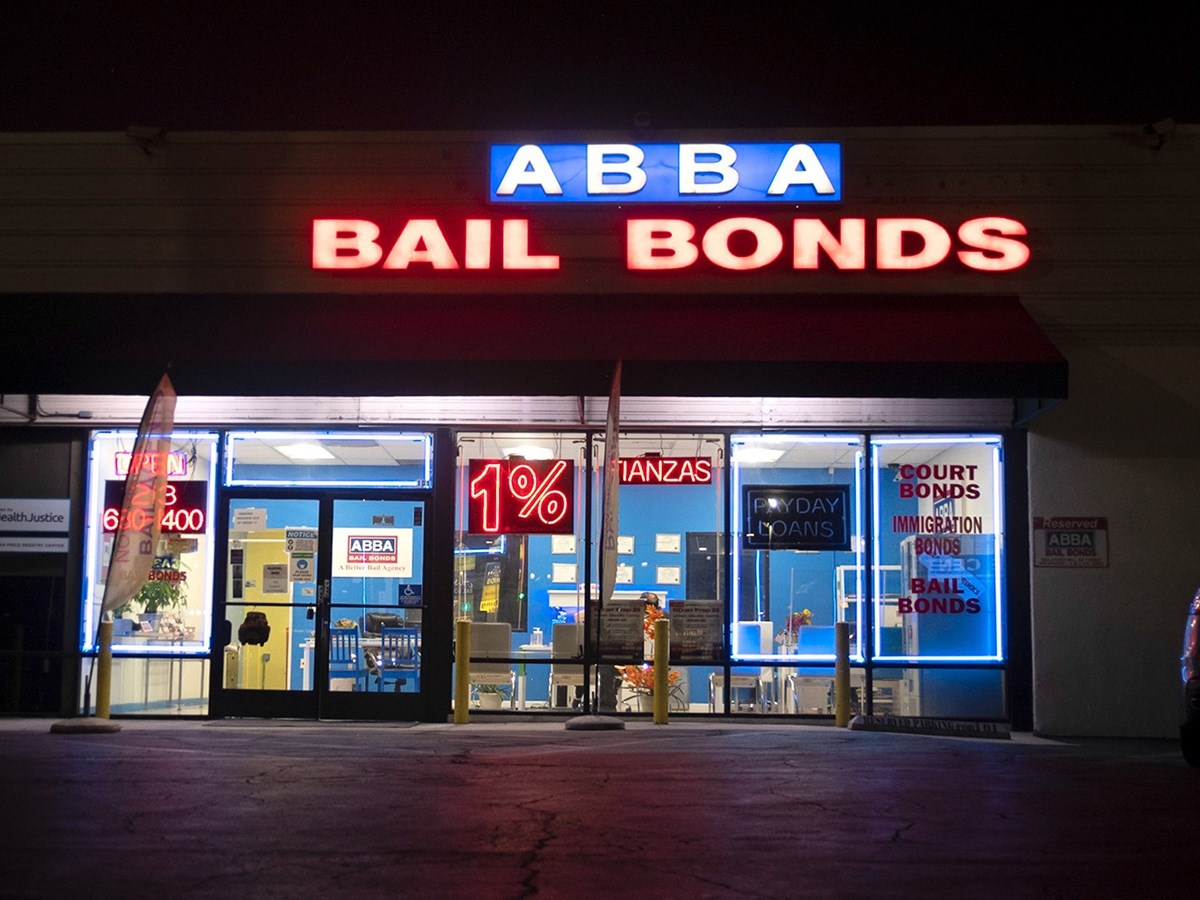 Abba Bail Bonds across from the Twin Towers Correctional Facility in downtown Los Angeles on Oct. 21, 2020.

This week’s state Supreme Court decision on cash bail could fundamentally alter the state’s criminal justice system — purportedly barring anyone from being held in jail before trial solely because they don’t have enough money to get out.

But it’s unlikely to throw open the jailhouse doors anytime soon for many of the 44,000 people across California who are behind bars on any given day, despite not being convicted and sentenced for a crime.

“It makes very clear you can’t detain someone just because they can’t pay,” said Natasha Minsker, a Sacramento attorney and consultant who focuses on criminal justice issues. “It leaves many questions unanswered.”

The use of bail has been a major focus of criminal justice reform efforts here and across the country. Last year, voters rejected Prop. 25, which would have ended the use of cash bail. The Supreme Court opinion issued Thursday says judges must consider a defendant’s ability to pay when setting bail. The opinion also said judges can consider public safety and whether a defendant is a flight risk when making pretrial detention decisions.

But the procedure for making such determinations is unclear.

“(S)triking the proper balance between the government’s interests and an individual’s pretrial right to liberty requires a reasoned inquiry, careful consideration of the individual arrestee’s circumstances, and fair procedures,” Justice Mariano-Florentino Cuéllar wrote in the opinion. “But…this is not a case that requires us to lay out comprehensive descriptions of every procedure by which bail determinations must be made. We leave such details to future cases.”

Those future cases will take time.

“Inevitably they’re going to exceed those limits” as the courts stumble through, Minsker said. And that will mean more litigation and, ultimately, decisions clarifying when criminal defendants can be held behind bars before trial.

Even with the ambiguity, criminal justice reform advocates and public defenders hailed the decision.

The opinion is “a validation of a ground-up movement in California and what we have always known as our truth that says liberty cannot be stripped simply because of an inability to pay for one’s freedom,” said Raj Jayadev, co-founder of the Silicon Valley De-Bug. Advocates said the challenge now is pressing judges to both reconsider bail in existing cases and to follow the spirit of the law going forward.

“There’s still a lot of legwork to do,” said Elizabeth Camacho, a felony case manager in the San Francisco public defender’s office. She said attorneys in her office will need to look at which cases might be eligible for reconsideration of bail under the new decision.

Three-quarters of jail inmates statewide are unsentenced — meaning they haven’t actually been convicted and sentenced for a crime, according to the Board of State and Community Corrections. Many have bail set by the courts.

For example, data obtained by CalMatters show that more than 4,300 of the roughly 5,800 unsentenced inmates in Los Angeles County jails as of mid-February had a bail amount listed. Some, however, likely have other holds such as an outstanding warrant that might prevent them from being released even if they can get a judge to reconsider their bail.

“It’s just a step forward in what is right. People — rich or poor — should have the same access to justice,” Camacho said. “I do think when our highest court speaks and says there must be an individual consideration of each person and whether or not there are non-monetary means to release pretrial — that’s powerful.”

“CDAA has long believed that California’s bail system needs to be thoughtfully reformed in a manner that balances both public safety considerations and the individual circumstances of the charged defendant, including, but not limited to, their financial means to post bail,” he said, adding that the association didn’t take a position on the case that led to the Supreme Court ruling.

Karen Pank, director of the Chief Probation Officers of California,  also released a statement appearing to praise the decision.

“Wealth should play no role in the justice system and we will continue to fight for a pretrial system that focuses on safety, fairness, and effectiveness for system-involved individuals and our communities,” she said.