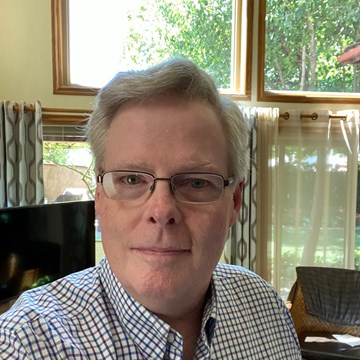 Mike is a native Californian, born in Los Angeles. After his father died when he was 8, he and his mother moved to Bishop, in the Owens Valley, where members of his extended family have lived since 1920.

He began his career in radio in Bishop when he was 15 and worked in San Luis Obispo and Ukiah before leaving California for Reno. That move led to a 30-year career in TV news in Reno, Las Vegas and Phoenix.

In 2013, Mike anchored newscasts for the 25 largest cities in the United States on the iHeartRadio app. In the fall of that year, Mike transferred home to California, continuing to anchor those newscasts from the studios of KFBK in Sacramento.

The following year, Mike was hired to be Editor of the KFBK Morning News. Over the next two years, he became Executive Producer, Managing Editor, Assistant News Director and then News Director. As News Director, Mike built a diverse staff of reporters and producers who listened to and learned from each other’s experiences.

In 2016 Mike was named co-anchor of the KFBK Afternoon News.

Along with members of the team, Mike is a recipient of both the Bill Stout Memorial Award for Excellence in Spot News Radio and the Murrow Award for Breaking News Coverage, both for the 2014 cross-town crime spree that resulted in the deaths of two law enforcement officers.

Mike is Executive Vice President of Western Automotive Journalists, the guild for automotive writers in Northern California. His car reviews appear on his own website, MikeHagertyCars.com, and in the Los Altos Town Crier.