President Trump's defense team continued Monday its second day of arguments in the president's impeachment trial in the Senate, against the backdrop of a news report that Trump directly told his former national security adviser, John Bolton, in August that he would hold up aid to Ukraine until the country launched investigations into his political rivals.

Trump's lawyers maintain that the president was legally justified in freezing military assistance to Ukraine and that the case against Trump presented by Democrats in the Senate last week does not clear the bar of an impeachable offense. But the report in The New York Times about the alleged conversation between Trump and Bolton — contained in a draft of the former national security adviser's book manuscript — changed the conversation Tuesday to whether senators would vote to call witnesses, including Bolton, as part of the proceedings. The report was based on Bolton's forthcoming book, a draft of which had been sent to the White House as part of a standard review process

Two Republican senators, Mitt Romney of Utah and Susan Collins of Maine, said Monday that the revelations about Bolton's book have made it more likely that senators will want to call Bolton to testify.

"I think it's increasingly likely that other Republicans will join those of us who think we should hear from John Bolton," Romney said, noting that he would make his final decision on the issue after hearing from Trump's defense.

Collins tweeted that the reports about Bolton's book "strengthen the case for witnesses and have prompted a number of conversations among my colleagues."

Two others who are seen as more open to calling witnesses — Sens. Lisa Murkowski of Alaska and Lamar Alexander of Tennessee — were tight-lipped.

Alexander said senators will decide "to call witnesses or other documents if we needed them after we hear all the arguments." Murkowski said in a tweet that while she was "curious" about what Bolton had to say, there is "an appropriate time for us to evaluate whether we need additional information."

Despite the buzz surrounding the unexpected plot twist delivered by the news about Bolton's book, neither Jay Sekulow nor Kenneth Starr, the Trump attorneys who each spoke at the start of Monday's proceedings, directly mentioned the manuscript.

Sekulow argued that the president "was at all times" acting under his constitutional and legal authority by withholding aid to Ukraine, saying that Trump's impeachment is about "deep policy concerns."

Starr, the former independent counsel who led the impeachment efforts against President Bill Clinton in 1998 and is now part of Trump's defense team, began his arguments by reciting a history of impeachment and declared, "Like war, impeachment is hell." He said, "It divides the country like nothing else. Those of us who lived through the Clinton impeachment understand that in a deep and personal way. "

Starr went on to accuse the House of abusing its power by approving article 2, which charges that Trump obstructed Congress.

Another of Trump's attorneys, Jane Raskin, spoke to defend Trump lawyer Rudy Giuliani, who was painted by the House managers as leading a rogue foreign policy operation by pursuing information against former vice president Joe Biden and his son, as well as pressuring to remove former U.S. Ambassador to Ukraine Marie Yovanovitch .

Giuliani, said Raskin, was the House's "colorful distraction," and, "A shiny object designed to distract you."

The push for witnesses

Over three days of arguments last week, House impeachment managers outlined their case that Trump enlisted a foreign power to help him cheat in the 2020 election and then has tried to cover it up. They've said that the president's conduct is the "worst nightmare" of the nation's Framers.

Trump's legal team is facing a mostly sympathetic group of jurors in the Republican-controlled Senate. An acquittal on the two articles of impeachment is all but guaranteed, since the Democratic caucus would need 20 GOP members' support to have the two-thirds majority needed to convict and remove the president.

More up in the air, however, is whether Democrats will be able to recruit enough Republicans to call witnesses for the trial. That vote has a lower threshold than the one required to remove the president from office. At least four GOP senators would have to cross party lines to call witnesses or subpoena documents.

In light of the Times' report on Sunday, Democrats were quick to reiterate that Bolton should testify.

Senate Minority Leader Chuck Schumer, D-N.Y., said Monday that the revelations should remove the GOP resistance against witnesses. He said details in the book provide "further evidence that a large number of people were in the loop" on Trump's alleged pressure campaign on Ukraine.

Schumer said there seems to be a "giant cover-up" within the White House and added that if Republicans don't vote to call witnesses, including Bolton, "they are going to be part of the cover-up too."

Sen. Angus King, I-Maine, told NPR's Mary Louise Kelly on Monday that up to 10 Republican senators could vote for witnesses following the Times' report about the Bolton manuscript.

"I'm already hearing a number of Republicans who are moving toward voting to at least hear from John Bolton, if not other witnesses," he said. When asked if four Republicans would vote for witnesses, he said: "I think there'll be more. My bold prediction will be five or 10."

Rep. Adam Schiff, D-Calif., the lead impeachment manager, linked testimony from Bolton to the very notion of a fair trial. "To say we will blind ourselves from a witness who has so clearly relevant testimony to one of the central most serious allegations against the president — I don't see how we can have a fair trial without testimony like that," he told reporters on Monday before the White House lawyers continued their arguments.

House Democrats had asked Bolton to testify during the impeachment inquiry but did not issue him a subpoena. The White House had ordered senior officials to not testify.

Any vote on witnesses and new evidence would come after the defense team rests (it has up to 24 hours over three days) and after senators have a chance to ask questions in writing of both House prosecutors and Trump's legal team. The questions will be read out loud by Chief Justice John Roberts, who's presiding over the trial.

NPR has not seen a draft of the manuscript and cannot vouch for the accuracy of the report on Trump's comments to the former national security adviser. A spokesman for the National Security Council said no one at the White House other than people at the NSC had reviewed Bolton's book.

"Ambassador Bolton's manuscript was submitted to the NSC for pre-publication review and has been under initial review by the NSC," NSC spokesman John Ullyot said in a statement. "No White House personnel outside NSC have reviewed the manuscript."

Trump denied Bolton's account in a series of tweets.

"I NEVER told John Bolton that the aid to Ukraine was tied to investigations into Democrats, including the Bidens," he said. "If John Bolton said this," Trump continued, "it was only to sell a book."

The military assistance and the desired investigations are at the heart of the impeachment proceedings. Democrats say Trump's actions constitute a clear case of abuse of power, with Trump placing his personal interests over the country's. The legal team representing Trump in the Senate trial argues that the president had justifiable concern about corruption in Ukraine.

The aid was ultimately released without the inquiries.

Lawyers for the president offered a brief glimpse of their defense Saturday, minimizing the evidence that House investigators gathered before the Democratic-led chamber impeached Trump for abuse of power and obstruction of Congress.

Pat Cipollone, the White House counsel, claimed Democrats' push to remove Trump from office is aimed at overturning the result of the 2016 election and "tearing up [voters'] ballots" months before the 2020 election.

On Sunday, Alan Dershowitz, another member of the defense team, said on Fox News Sunday that the Democratic-led prosecution does not have a case that passes constitutional muster.

"They completely failed to meet that high constitutional standard, and therefore it would be unconstitutional to remove a president based on the allegations that were made against him," Dershowitz said. "They imposed very stringent criteria for impeachment that haven't been met in this case," citing the Founders' standard for impeachment, which is "treason, bribery and other high crimes and misdemeanors."

In December, the House passed two articles of impeachment against Trump: abuse of power and obstruction of Congress. The vote for impeachment followed hours of testimony, in private and in public, with more than a dozen witnesses during the House impeachment inquiry.

Trump's legal team is also expected to take aim at the president's potential political opponent, Joe Biden, and his son, Hunter Biden, making the case that Trump had good reason to want Ukrainian investigators to launch criminal probes into the activities of the Bidens in Ukraine. (While Joe Biden was vice president, Hunter Biden took a position as board member of a gas company in Ukraine.)

The full-throated defense of Trump comes after the nonpartisan Government Accountability Office declared that the president broke the law in ordering a hold on nearly $400 million in security assistance to Ukraine.

Because the Trump administration refused to participate in the House impeachment inquiry, the president's defense in the Senate is the first time Trump's team is presenting a lengthy rebuttal to the charges against him. 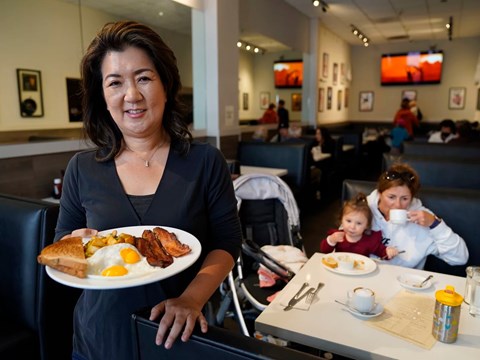