Dental hygienist Bruce Fang sat waiting in blue scrubs for the day’s patients before a few students ambled into the room, one at a time, ready for their appointments. Some were chatty once in the chair, others squirmed. But 7-year-old Stephanie Rojas sat still.

“Do you remember when you lost that tooth right there?” Fang asks. Silence falls over the room. “A long time ago,” Rojas says in a mumbled reply.

Fang notes nothing new in the outlook — just the one tooth that’s missing. He puts her down for a visit with a specialist to further assess her dental needs. Rojas is back in class in less than 30 minutes.

For the past two years, improvised clinics like this one have served students of Northwood Elementary and other schools in the Twin Rivers School District of Sacramento, part of the steady growth in school-based health centers that provide access to routine and preventive care for underserved populations.

“We targeted those schools where there are high rates of free school lunch programs — that means they’re all qualified for Medi-Cal whether they’re signed up or not,” said Debra Payne, who oversees the oral health programs for Sacramento County.

“We’re bringing those services to the schools where the kids already are.”

School-based health programs have been around for decades, and although California has extended Medi-Cal to financially stressed children — regardless of their legal status — the role of such programs is more pivotal than ever.

Roughly 300,000 California children are anticipated to be uninsured next year despite being eligible for Medi-Cal benefits, according to the latest projections by the UCLA Center for Health Policy Research and the UC Berkeley Labor Center — although new state health care legislation is expected to lower that number. Experts say myriad reasons, both old and new, are to blame for the fact so many children are not enrolled, but school outreach helps ensure that access is still guaranteed.

“There is a role that school-based health centers always play with respect to outreach and enrollment (in health programs),” said Tracy Mendez, executive director of the California School-Based Health Alliance. “The good thing about some of our health programs, especially in California, is they allow ways that providers can help patients enroll in these programs at a site of care.”

Millions of dollars in Affordable Care Act funding helped pave the way for the number of school-based health programs nationwide to grow by 34 percent since 2011, according to a recent Health Affairs report.

California has added 92 programs since 2007, according to the Alliance’s data. More than 200 clinics operate in California public school districts, offering dental, primary care, mental health and other services, although that represents only a fraction of the more than 1,000 districts in the state.

The bulk of the programs are based in Los Angeles County, where providers cover some 75 sites. Many centers play an outsized role as providers of reproductive and mental health as demand increases for those services in schools. Some community health centers have gone so far as to place brick-and-mortar buildings at school sites to serve students and the surrounding community.

“Schools are not big enough to be able to have the school-based clinic just for the school,” said Anitha Mullangi, chief medical officer at St. John’s Well Child and Family Center, which operates five school-based programs in Los Angeles County.

“These clinics are outside the school in a way that’s open to the street,” Mullangi said, “so it is much easier to see patients without feeling like they are entering the school.”

Medical issues like dental pain, unaddressed hearing problems and uncorrected vision can take a toll on learning outcomes, studies show. These setbacks can have compounding effects, especially on children from low-income families.

So schools like Gaston Middle in Fresno have begun treating the health of its more than 800 students with greater urgency. Since 2014, the Gaston Middle Health and Wellness Center has been on the school campus in a standalone building run by Clinica Sierra Vista, a federally qualified health center that provides care in underserved communities.

“You can’t teach a child that doesn’t feel good,” said Felicia Quarles Treadwell, the school’s principal. “It allows us to keep nurturing our community as well.”

Quarles Treadwell couldn’t say how many students are on Medi-Cal or uninsured. But the school is in an area that “to a certain degree is low socioeconomic,” she said. “So I would say that the percentage of private insurance versus Medi-Cal is much lower.”

At the Gaston Middle Health and Wellness Center, children who are uninsured get placed in the Child Health and Disability Prevention Gateway program, which provides temporary coverage until they apply for and receive Medi-Cal benefits, said Reyna Villalobos, director of programs and population health for Clinica Sierra Vista.

“No child is left without coverage,” Villalobos said. “This is the entry point.”

Three of Raquel Garcia’s children use the clinic as their permanent medical provider. She started coming three years ago. Her children were already enrolled in Medi-Cal when she transferred them to the school-based health center, she said. 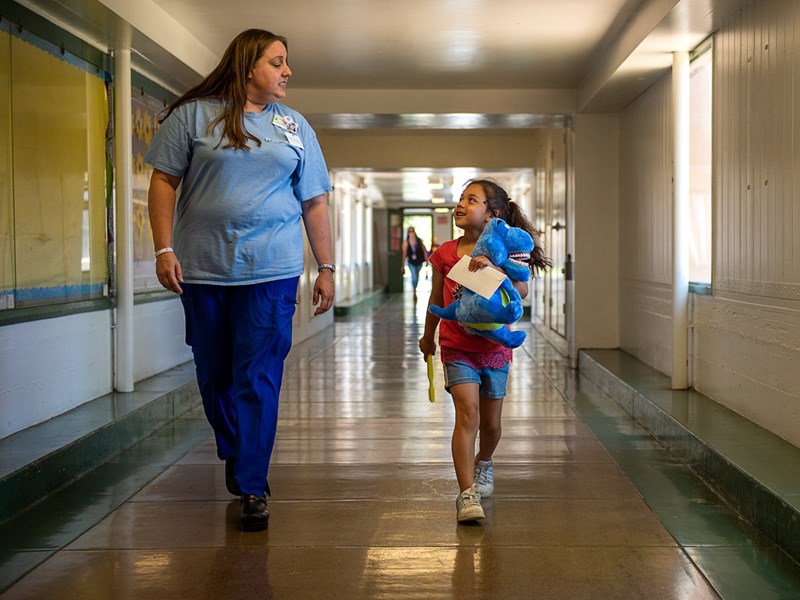 First grader Stephanie Rojas, 7, walks back to her class with dental coordinator Gizelle Jacobs after a dental visit at the Northwood Elementary School on Friday, May 31, 2019 in Sacramento.Paul Kitagaki Jr. / The Sacramento Bee

Convenience was a major draw. Typically, when students get sick, they are taken to the school nurse, Garcia said. If they need treatment, the school calls the parents before transferring them to the clinic to be seen by a doctor. As regular patients, her children can just go straight there.

“If they get sick, they are able to treat them quicker here,” Garcia said.

Although Medi-Cal is a lifeline for many, the program is still beset by a low rate of utilization compared with other states. Less than half of all enrolled California children used preventative services in 2017 — the 11th-lowest utilization rate in the country, according to a state audit released in March.

What’s more, new data from the Centers for Medicare and Medicaid Services showed that child enrollment in Medi-Cal declined by 3 percent by the end of 2018 compared with the same period the year before.

What’s unclear is the cause for the decline. Observers like Mendez of the California School-Based Health Alliance blamed the Trump administration for immigrants’ fears about using government programs. The president also proposed changes to the “public charge” rule — a test that determines the likelihood an immigrant will become dependent on the government for support, potentially making it more difficult to obtain a green card.

“More generally, it’s just fear that immigrant families have about being seen on public programs, giving their data to the county or the state to utilize programs like Medi-Cal,” Mendez said.

Many school districts have been slow to embrace school-based health centers. The pilot project in Twin Rivers will likely expand to two neighboring Sacramento districts for the first time next school year.

Staffed with a dental hygienist and an assistant, the clinics operate twice a week in various high-need schools where they might be the best chance for a child to see a dentist.

They call these clinics virtual dental homes, a county-run pilot project that allows children to have routine screenings done at school, whether students are insured or not. A dentist reviews X-rays and other tests from an off-campus office, where students are referred if any advanced procedure is needed.

There were 339 students enrolled in the dental program this school year, most of whom were already signed up for Medi-Cal. However, two out of every 10 children had not visited a dentist in the past year.

Four health providers — WellSpace Health, Western Dental, Blue Hills Dental and the Sacramento Native American Health Center — work in 18 schools in Sacramento. The coordination guarantees that even if a child receives care through another Medi-Cal provider, parents can easily switch so their child can be treated at school.

If they agree, the providers will do most of the administrative work. Even so, the dental navigators — a role created to guide parents through any roadblocks — faced challenges getting buy-in.

“The thinking is that this will be sustainable,” Christi Kagstrom, who coordinates student health and prevention services in the Twin Rivers Unified School District, said, “so the pilot can end and the dental providers will be able to stay in the school with the model that’s been proven here.”

Collaboration makes the “virtual dental home” model unique. But it’s a rarity in many other school-based health programs, which some say poses a barrier to treatment.

Sacramento-based Elica Health Centers received a federal grant to serve some of the 50,000 students in the nearby San Juan Unified School District. It purchased vans and holds mobile clinics at four schools, giving physical exams and treating other medical issues.

Once on a school site, the group must navigate restrictions on whom it can treat and how, said David Hughes, Elica’s chief operating officer.

That’s partly because many school-based health programs are now “caught in between” the state’s shift to a managed care model for Medi-Cal, said Alex Briscoe, the principal of The Children’s Trust, a health care initiative in Los Angeles. Because Medi-Cal providers can only provide services to managed care patients who are enrolled in their network, school-based providers must sometimes try to get families to complete paperwork before they can administer care.

“School-based health programs are essential for the Medicaid population,” Briscoe said. “Unfortunately, California — despite pockets of excellence — ranks far below where it should in the size and scope of these services.” 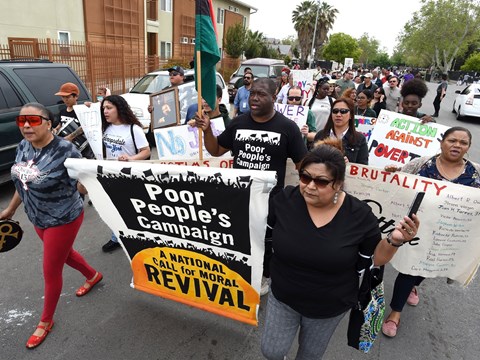 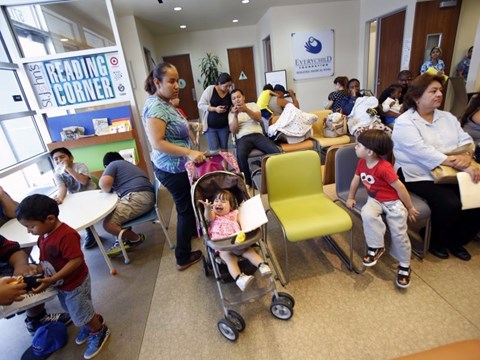 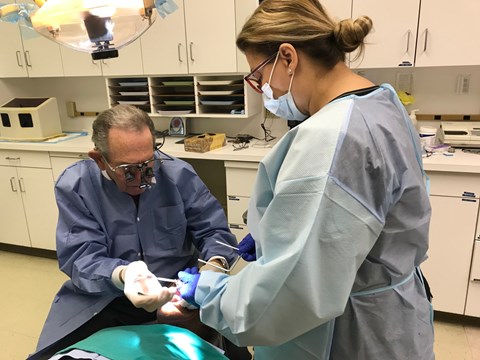