A lone gunman walked into one of the nation's busiest airports Friday in Los Angeles and opened fire with an assault rifle, killing at least one transportation security officer and wounding another, police and TSA officials say.

Authorities have identified the shooting suspect as Paul Anthony Ciancia, 23, originally of New Jersey. Officials did not immediately provide a motive for the assault.

The attack left at least seven people needing medical treatment (including the shooter), officials said, and forced the evacuation of a terminal and delays of flights coming into and out of the airport. At least one of the injured is listed in critical condition, a hospital official said.

The gunman, officials said, was taken into custody after exchanging fire with airport police. LAX Police Chief Patrick Gannon said the assailant "pulled an assault rifle out of a bag and opened fire in the terminal."

LA Mayor Eric Garcetti said that the situation could have been much worse, reports NPR's Newcast.

"The fact that these officers were able to neutralize the threat as they did," Garcetti said. "There were more than 100 more rounds that could have literally killed everybody in that terminal."

As happens when stories such as this are developing, there was a considerable amount of conflicting information in the early hours. We're focusing on authorities who should have direct knowledge of the situation and news outlets with reporters who are at the scene or have trusted sources.

Follow the story with a live feed from KPCC

Update at 8:50 p.m.: Agent Identified
The TSA has been identified the slain officer as Gerardo I. Hernandez, 39. A second agent was shot, but has not been identified.

Officials provided no other details about Hernandez. 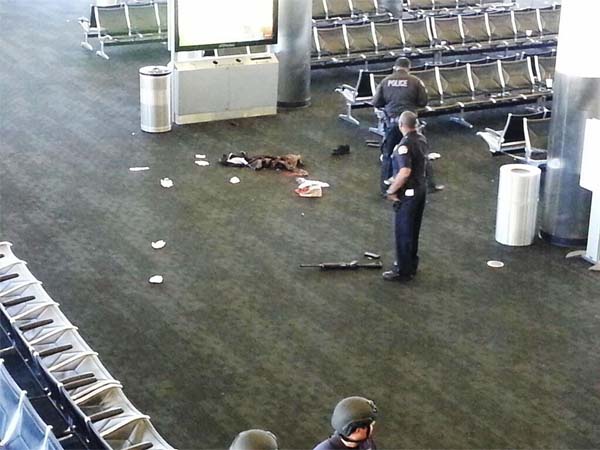 Police officers stand near an unidentified weapon in Terminal 3 of the Los Angeles International Airport on Friday. Officials said a gunman who opened fire in the terminal was wounded in a shootout with police and taken into custody. (AP Photo via NPR.org)

Update at 5:20 p.m.: Suspect Chased In Exchange Of Gunfire

NPR's Kirk Siegler tells All Things Considered that the gunman "would have had to get through the security area while firing this [assault] rifle."

"[Then] down a relatively long hallway and the gate area where there are restaurants and of course people waiting to board," he said. "We are told that this entire time, he was being chased by airport police in an exchange of gunfire. At one point an airport police officer was hit, as was the suspect. They did manage then to bring him into custody."

“We have six more flights that were scheduled to go to Los Angeles between now and 6 p.m." said Slothower. "The information we have is that those flights will occur, but there will be delays and we can’t say how much or how long.”

Slothower said airlines social media feeds may be travelers' best source of information. Many flights out of Los Angeles are still departing, though many others have been cancelled.

Special Agent in Charge David Bowdich, of the FBI's Counterterrorism Division, confirmed the identity and age of the suspect and said that he was originally from New Jersey. Bowdich said one of the wounded is a TSA officer. He said others appeared to have "evasion injuries" from trying to escape the shooter.

NPR has confirmed the identity of the shooting suspect as 23-year-old Paul Anthony Ciancia.

NPR's Kirk Siegler spoke with Stacy McLennan, who was waiting in line at the Air Canada check-in counter when the shots rang out.

"I was at ticketing and one of the TSA agents turned around and said so and so had been shot and we turned around and it was a really young kid, TSA agent, and he had blood coming out of his abdomen and there was blood coming out from his hand," McLennan said. "We all were just standing there and didn't know what to do, and the next thing we knew, they said 'run, run,' and so we all just took off running."

Xavier Savant, who witnessed the shooting, tells The Associated Press that he was waiting in a security line when he heard a "bam, bam, bam" burst of gunfire. He and others "just hit the deck. Everybody in the line hit the floor and shots just continued," Savant said.

He said the shots subsided and people bolted through past the scanners and made their way to the tarmac.

This statement from a TSA official: "Earlier this morning, a shooting occurred at Terminal 3 at Los Angeles International Airport. Multiple Transportation Security Officers (TSOs) were shot, one fatally. Additional details will be addressed by the FBI and local law enforcement who are investigating the shooting."

Separately, NPR has been told by the LA Coroner's Office that a 40-year-old male is dead, but no further information was available.

A spokesman for the American Federation of Government Employees, the union that represents TSA workers, says: "We have received first-hand confirmation from a reliable source that the shooter was not a TSO."

Meanwhile, a UCLA Medical Center doctor told reporters that the hospital is treating three adult male patients from the airport shooting — one is in critical condition; two are listed as fair.

Multiple people were shot after a gunman opened fire in Terminal 3 of Los Angeles International Airport, according to police and city officials.

Police have said the suspect is in custody.

At 9:20 a.m., a person pulled an assault rifle from a bag and began shooting in the terminal, the gunfire striking and wounding several people, said LAX Police Chief Patrick Gannon.

Airport police responded and tracked the suspect through the airport and engaged with gunfire, Gannon said.

At this point, it is believed the suspect acted alone and that the incident was limited to Terminal 3, he said.

The fire department treated seven patients, and six were transported to area hospitals, according to James Featherstone of the Los Angeles Fire Department.

The FBI has taken the lead on the investigation.

While several local news outlets are reporting they've been told that there have been one or two fatalities, airport Police Chief Patrick Gannon just told reporters he does not know that to be true.

Multiple people were shot on Friday when a gunman opened fire at a security checkpoint in Terminal 3 at Los Angeles International Airport, police said.

LAX Police Chief Patrick Gannon said that it appeared the gunman was acting alone and indicated that victims had been transported to local hospitals.

A suspect is in custody and multiple injuries reported after a gunman opened fire at a security checkpoint in Terminal 3 of Los Angeles International Airport.

Witness Tim Daley, who was in the Virgin lounge just above where the shooting took place, described a scene of panic and what appeared to be an AR-15 rifle.

"I can see what looks like an AR15 and 3 clips — it looks like blood on the ground. It's funny because when you're in the movies when guns go off people are macho, but people freaked out they didn't know what to do," Daley said.

Meanwhile, KPCC's Corey Moore reports from Century Boulevard that the street has cleared considerably in the last hour. Moore said he thinks "police have diverted traffic down the opposite direction and described seeing people "texting, walking around. People are getting out of their cars, rolling down Century blvd trying to get a back-up plan, some are sitting on the curb not sure exactly what to do."

Detective Gus Villanueva of the Los Angeles Police Department told NBC4 that police believe they have a suspect in custody after a gunman opened fire in Terminal 3 of L.A. International Airport.

Villanueva said officers are sweeping through the terminal to make sure there are no other gunmen.

A tactical alert means that no officers on duty can go home until allowed by a supervisor. It also means that officers will be dispatched to the most serious calls first.

The rest of the city is on a modified tactical alert.

Meanwhile, KPCC's Brian Watt confirms that planes have been landing at the airport.

"I have definitely seen planes coming — probably not with the same frequency of landings that usually I see when I'm driving this road, but definitely some planes have been arriving… I can't say that I've seen any planes leave from the airport area."

"(Traffic) is not moving at all. It's completely a standstill," said Moore, who is en route to the scene.

President Barack Obama has been briefed on the reported shooting at Los Angeles International Airport.

The White House says the Los Angeles Police Department is leading the response and investigation into the shooting, and administration officials are in touch with federal and local partners.

The White House says it is urging people to listen to authorities and follow directions from first responders on site.

All flight operations, with the exception of arriving flights, are temporarily on hold, LAX officials say.

All upper level roadways for departures have been temporarily blocked by law enforcement, according to Katherine Alvarado, an airport spokeswoman.

One witness described hearing eight to 10 shots fired in two bursts. Nick Pugh said he had just been dropped off at the main entrance and was up on the upper mezzanine when he heard the shots from just below near the security checkpoint.

"It sounded just like a gun and I basically — everybody dropped to the floor and started crawling on the ground, but there was no way to go. Luckily I was by an emergency exit," he said.

Pugh said he ran across the tarmac, when a line of police stopped him as a possible suspect. He was released after about 10 minutes.

With student loan relief tied up in court, Biden extends repayment pause into 2023