A crowd of nearly 50 people from Amador County and surrounding communities gathered in Sutter Creek last month to discuss suicide risk in rural California and what community members can do. It was a conversation that residents said would not have happened a few years ago, and would still be considered taboo in most circles.

That’s because many residents in this quiet community don’t realize that their neighbors are taking their own lives at higher rates than nearly any other California county. The 2018 County Health Status Profile from the California Department of Public Health shows that Amador County has the third highest suicide rate in the state. This tiny county has more than twice Sacramento’s suicide rate, though the two regions are separated by a mere hour’s drive.

Capital Public Radio wants to find out why these numbers are so high, and how Amador and other rural communities can tackle the problem. So reporter Sammy Caiola, editor Linnea Edmeier and community engagement strategist jesikah maria ross joined Olivia Henry, engagement editor with the University of Southern California’s Center for Health Journalism, to hold a community discussion. Caiola has also been on the ground talking with folks since April. We’ll be working on this project, with support from USC, for the next two months.

Here’s what we’ve learned so far.

There’s no single answer to why suicide tends to be more common in rural areas, but we did find out about some relevant factors.

For one, rural areas tend to skew older. Many people live alone, miles away from central services. They may lack transportation and be estranged from friends or family. If they’re grieving a loved one, struggling financially or suffering from substance addiction, depression can thrive. Researchers say loneliness and social isolation may represent a bigger threat to public health than obesity.

In Amador County, about 61 percent of the 62 people who died by suicide between 2010 and 2014 were age 50 or older, according to a study of death certificates conducted by Amador County Public Health and a UC Davis medical student. This research only analyzed deaths that were marked as suicides. It did not include suicide attempts, or deaths by other methods such as car accidents or overdoses. 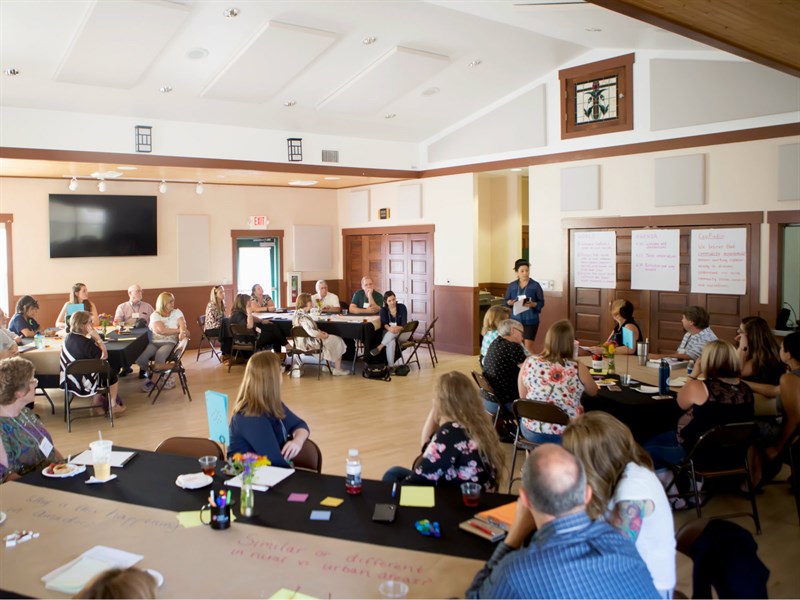 Linnea Edmeier, CapRadio's managing editor for news and a resident of Sutter Creek, kicks off a conversation about the suicide crisis in Amador County. Vanessa S. Nelson / Capital Public Radio

“Some folks might be retired now and they’ve had a wonderful career, and then they buy a house here and they’re kind of isolated,” said Joseph Bartholomew, director of the Sierra Wind Wellness and Recovery Center in Jackson. “So that can be a barrier, getting someone to them or getting them out of the house … that is something that really needs to happen, especially in these areas.”

About 12 percent of Amador County residents are veterans, compared to 6 percent nationally. Post-traumatic stress disorder, substance use, chronic pain, traumatic brain injury and experience with firearms make veterans about 22 percent more likely to die by suicide than the rest of the population, according to research from the Department of Veterans Affairs.

The public health study found that about a third of people who died by suicide in Amador were veterans.

Nichole Mulford, who runs a nonprofit veterans home in Jackson, said her clients are unlikely to seek out mental health services.

“Oftentimes when they come to Victory Village they’re at rock bottom,” she said, referencing her organization. “Because veterans have a really hard time asking for help. When they’re in the military, it’s ingrained into them to be self reliant … and asking for help would negate all of that training.”

Residents said the downturn that Amador experienced after the closure of several lumber mills in the 1980s and 1990s still has much of the community in an economic slump. Many people work in the prison industry or at nearby casinos. Financial struggle can lead to substance abuse, which contributes to suicide risk.

And those problems affect kids, too. School counselors and youth mentors who attended the meeting said they’ve worked with children in elementary school who were considering suicide. They said there’s a lack of awareness in schools and neighborhoods about the trauma that many children experience at home.

There’s also greater access to firearms in places like Amador. About 56 percent of adults in rural counties live in a home with firearms — compared to 15 to 30 percent in the 100 largest metropolitan areas and their suburbs, according to the University of Chicago’s General Social Survey.

The Amador death certificate study showed that 58 percent of all suicides during that period were due to firearm injury. Age affects this equation — 76 percent percent of people over age 50 who died by suicide used a firearm, while less than half of the younger demographic opted for that method. 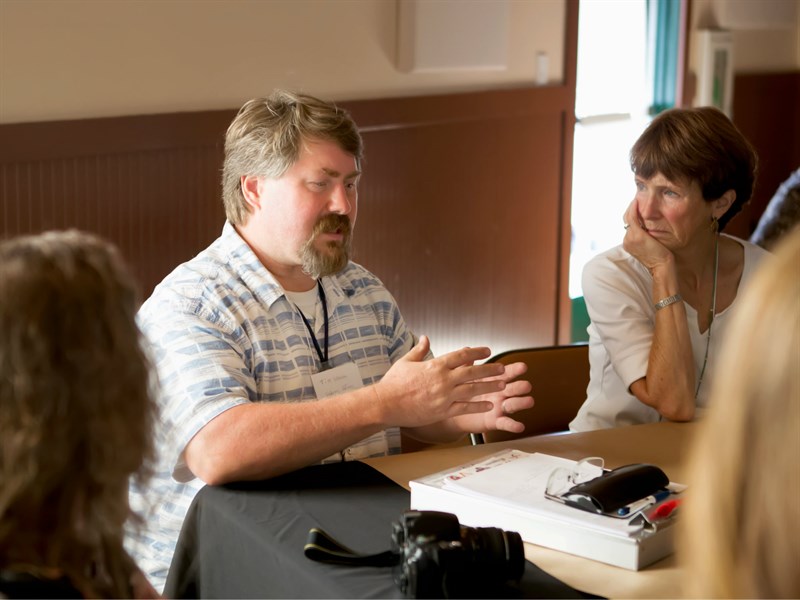 “The thing with firearm suicide is that it’s such a deadly method of attempting suicide,” she said. “It’s this particular demographic that is really dying from firearm suicides, and a lot of that demographic lives in more rural areas.”

What suicide prevention resources exist in Amador County? What are the barriers? What’s needed?

Residents told us that there’s a mental health movement rising in Amador, and some solutions are already in play. We heard from community leaders who work with teens, seniors and everyone in between to try to provide at least a basic level of support for those in crisis. You can find a list of hotlines and other resources here.

But there are some major barriers that keep people from getting help.

It’s a complaint that came up over and over at our event: There aren’t enough mental health professionals in Amador. The county offers subsidized mental health services, but only for residents who are on Medi-Cal. Seniors who are on Medicare, veterans who are on VA policies and people on private plans must look elsewhere. For many, that means driving to Elk Grove, Sacramento or even Folsom.

Many residents said there are no private psychologists or psychiatrists in the county. The local hospital lacks psychiatric beds, so people in crisis go to the emergency room, and are often sent out of county for follow up care. There are a handful of therapists, but residents said it’s not enough to meet the demand. This is a problem that affects many rural counties, because few high-level providers want to practice in remote areas where the patient base tends to be older and sicker than in cities.

The public perception around mental health challenges is one of the strongest barriers to getting people help. But it’s perhaps also a slice of the problem that community members are best positioned to tackle.

“When folks hear messages from people like them, they tend to accept the help more,” said Stephanie Hess, Mental Health Services Act program coordinator for Amador County Behavioral Health Services. “I want people to be willing to ask for help. We need to really try to focus on a stigma free community… that’s where we need to begin.” 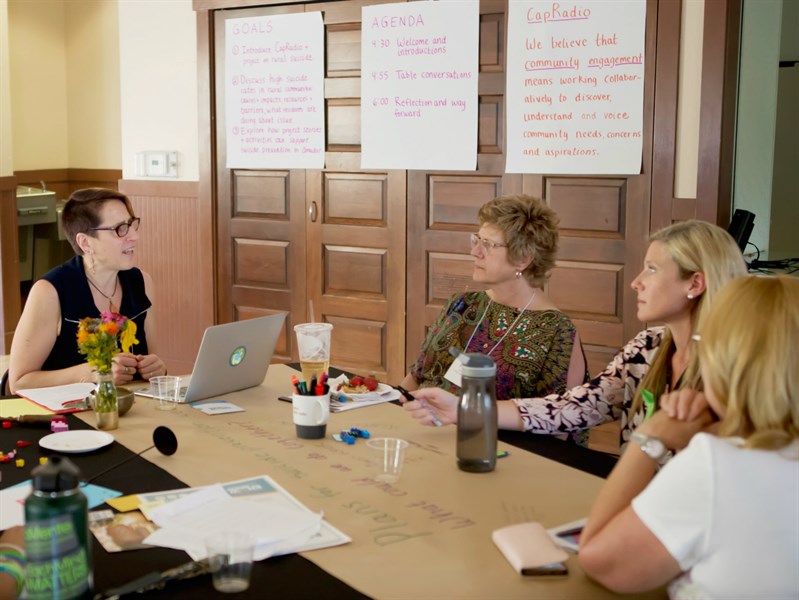 We heard from attendees that many Amador residents see depression, anxiety, PTSD and other disorders as a sign of weakness.There’s a lack of education about mental health, and most people don’t know the signs of suicide. And even if someone is concerned about a friend or family member, they may not feel comfortable broaching the subject. And they might not know where to point that person for help.

What’s in motion, and what can CapRadio do from here?

Fortunately, there are some resources available. The Sierra Wind Wellness and Recovery Center and the National Alliance on Mental Illness both offer support groups for people who are working through mental health challenges. Nexus Youth & Family Services offers counseling for children and teens. The Amador Senior Center offers a senior visiting program that sends volunteers to homes of isolated older people.

Following CapRadio's convening in Sutter Creek, two community members in attendance authored a guest editorial in the Amador Ledger about the issue of suicide in Amador County and what residents can do now to take action. You can read it here.

The issue is, many of the people who could benefit from these services aren’t aware that they exist. Most attendees want to see a push to get the word out. They also want to see more training of law enforcement, school officials, primary care providers and just everyday people around how to recognize suicide risk and intervene.

Trixxie Smith, a peer support counselor and chaplain, said it can be as simple as just checking in with somebody.

“[People] need to feel that other people care about them and want to hear their story,” she said. “And anyone can do that.”

Reporter Sammy Caiola aims to collect personal stories about suicide and share them out as a means of reducing stigma and raising awareness. You can call her at 916-278-8930 or get in touch using this form. You can also find local prevention resources here.

The group discussed the best ways to share our public radio reporting project with Amador and the surrounding community, and how to collaborate with local groups during Suicide Prevention Week in September. Our community engagement team will be working on that, while reporter Sammy Caiola keeps reporting on the ground.

And if you or someone you know needs help, call the National Suicide Prevention Lifeline at 1-800-273-8255. 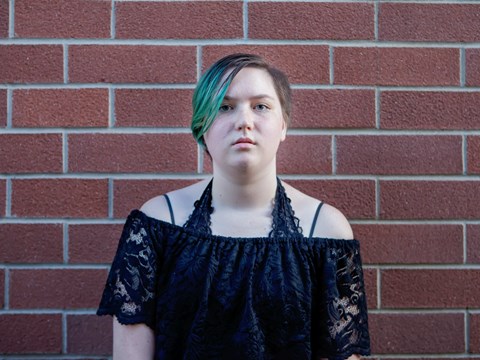 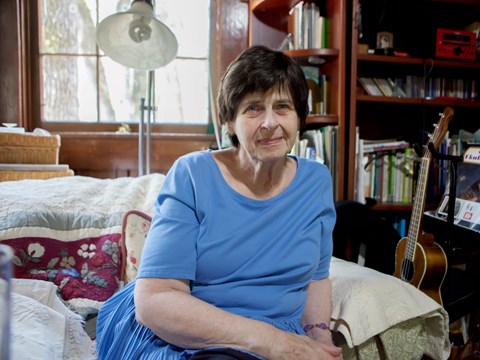 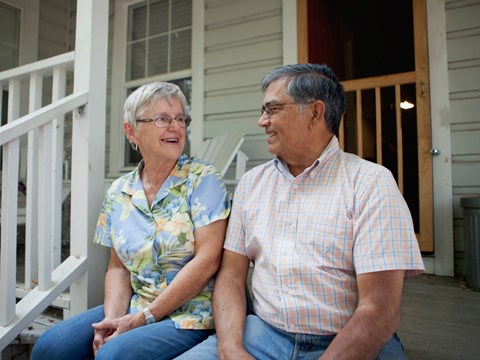