The Bay Delta Conservation Plan: A Solution For The Delta's Future?

On Bolden Island in the central Delta, excavators are filling trucks with dirt for a levee improvement project. The Delta has 1,100 miles of levees.

Joel Dudas, a senior engineer with the California Department of Water Resources, says subsidence, where the level of land drops, is a constant threat.

“We’re probably 20 to 25 feet below sea level right here,” says Dudas. “We’ve had in some places 30 feet of subsidence, that’s what’s increasing the stress on these levees.” 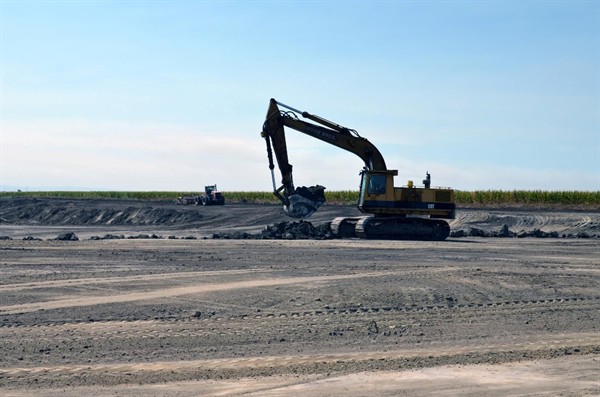 (Excavators on Bolden Island in the central Delta. Photo By Amy Quinton)

Levees are also vulnerable to sea level rise, extreme floods and the big fear – an earthquake.

“You will find a range of opinions on the seismic risk. In my opinion if we get the wrong earthquake in the wrong place the amount of money to basically protect the levees against that threat doesn’t exist and won’t exist,” says Dudas. “That’s my fear is that we wind up with a Delta that’s basically good for nothing. It’s basically an inland sea.” 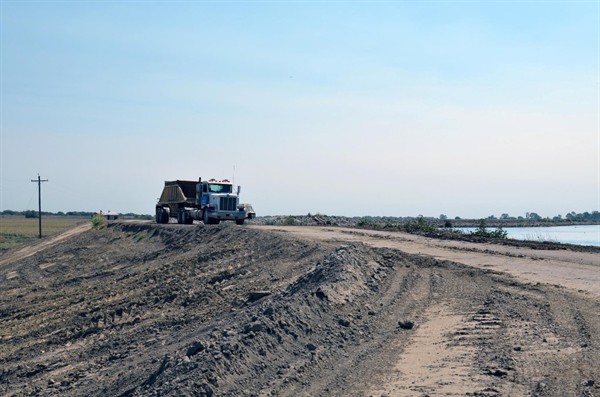 (Levee repair project in the Delta. Subsidence is visible. Photo By Amy Quinton)

Saltwater would seep in. The pumps that export water would shut down. California’s agriculture and 25 million people who depend on the Delta’s water would lose it. For how long is unclear.

“At that point, the luxury of planning and doing something smart will be taken out of our hands,” says Jeffrey Kightlinger, general manager with the Metropolitan Water District of Southern California. They’re the largest water contractor in the state.

“We’ll be in emergency mode, we’ll be in post-Katrina mode and we’ll just be bulldozing and not worrying about the environment,” says Kightlinger.

The BDCP seeks to provide both a reliable water supply and improve the environment for 57 species of fish and wildlife. It proposes building two 30-mile long tunnels, each 40 feet in diameter. They would divert water from the Sacramento River using state of the art fish screens.

The estimated price tag for the tunnels and the restoration: $25 billion.

We’re at a Walnut Grove coffee shop where the group’s “Stop the Tunnels” signs are everywhere. One of the group’s biggest concerns is that the tunnels have a 9-thousand cubic foot per second capacity. 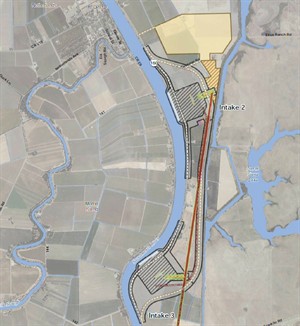 “The proposed tunnels with the three intakes right now have the capability of taking away almost 70 percent of the water, of what flows through the Sacramento River,” says Barrigan Parilla.

But tunnel proponents say moving the intakes to the Sacramento River will prevent reverse flows at the south Delta pumps that kill fish.

Secretary John Laird with the California Department of Natural Resources says there is a difference between capacity and actual operation.

“That is something that’s lost is that people focus on what the absolute capacity might be.” says Laird. “In the 40 plus years that the State Water Project has been there, the capacity has always been much greater than what legally or permit wise can be pumped,” he says.

Recently the footprint of the project shrunk by half and its proposed path shifted away from some private lands to public, in part to placate Delta residents. Instead, the changes created a new battleground.

On Staten Island, Dawit Zeleke with The Nature Conservancy looks over a flooded corn field. The island is a permanent wildlife refuge the Conservancy manages to protect the threatened Sandhill cranes.

“15-percent of the Sandhill cranes that come down the Pacific flyway from Canada, Alaska come down here to overwinter,” says Zeleke.

Under the revised BDCP, the tunnels would pass under the island. 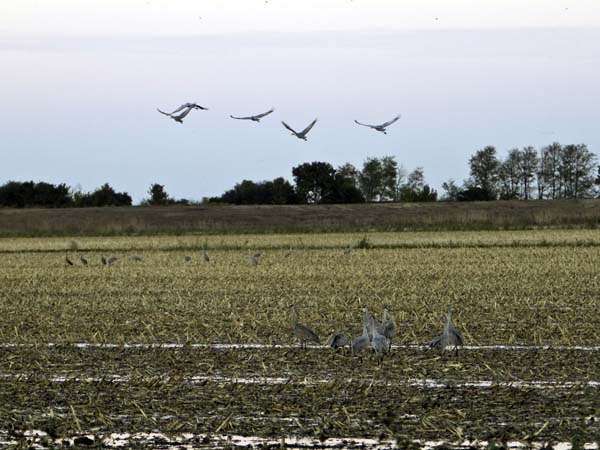 (Sandhill cranes on Staten Island. Photo By Erika Nortemann of The Nature Conservancy)

“There’s no question about it, construction of a tunnel under this island is going to be disruptive,” he says.

Zeleke says the Sandhill cranes bond to one location every year. State agencies say they could manage construction when the cranes aren’t migrating. But Zeleke isn’t convinced.

The Nature Conservancy believes it could support the BDCP if the project improves all habitat types for all threatened species.

When asked if he was hopeful that the BDCP is the solution, Jay Ziegler, policy director at the Nature Conservancy just sighed. 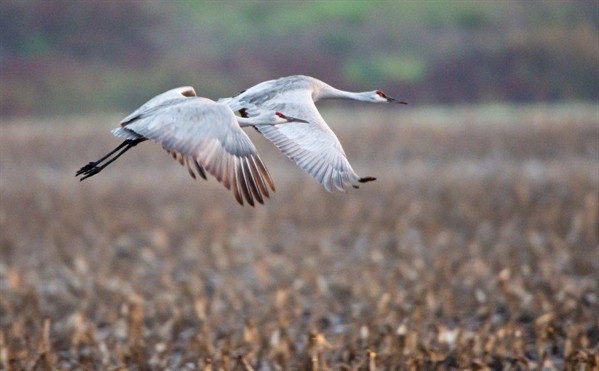 The Department of Water Resources says there is no scientific certainty about how to best operate the proposed tunnels to recover fish species and maintain an adequate water supply.

“I think that we are closer to getting something good done than we have been in many years,” says Laird. “I think there is a broader acceptance that the status quo is unacceptable.”

Draft environmental documents will be available for public comment in November.