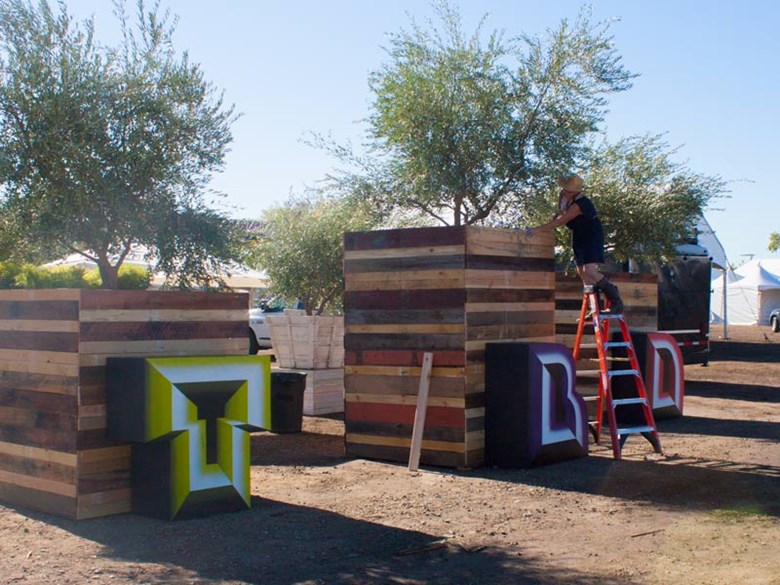 A TBD Fest worker sets up a live-plant art installation at the entrance to the festival site.

The co-founder of the West Sacramento three-day electronic/indie music festival known as TBD Fest is being sued for non-payment and breach of contract.

Katrina Arnaud, a Sacramento CPA, says she agreed to lend Clay Nutting $200,000 for TBD Fest because she believed in his vision. Arnaud met Nutting through a business associate and says she has never made an investment like this before. She admits to not really enjoying rock music or festivals.

“I never met him before, he had a very likable personality,“ she says. “He just reeks of credibility and honesty and integrity. He has a vision of not only his own success but moving forward for the city of Sacramento, that’s something I believed in.”

According to court papers, Arnaud was to be paid in full plus 15 percent interest on the loan by Aug. 10, 2015, about a month prior to the event date. So far, Arnaud says she has not been paid.

She received an email message from Nutting prior to the Dec. 21 publication of a Sacramento Bee article about the festival’s financial troubles, it said in part:

“I completely understand why you filed. I am sorry it has taken so long. I just want you to know that I am going to do whatever it takes to take care of my obligations, and I apologize that payments have not been timely.”

Arnaud says she considered Nutting a friend and feels a personal loss.

“Everybody likes Clay, he’s a likable guy - but there are more and more reports of people from prior year’s festivals that never got paid - and that’s not a friend,” says Arnaud. “If he’s incurring debt for small vendors that’s leaving a wake of dead bodies behind him. Is that vision of his success inclusive of the loss of his integrity and his word?”

CapRadio contacted ten vendors and artists involved with TBD Fest and it’s precursor festival, LAUNCH. None of whom wanted to speak on the record about whether they’d been paid or not. Some said they didn’t want their work associated with the controversy, most just wanted to get back to work.

LAUNCH started as a one-day, art-party set in a hotel in Del Paso Heights in 2007 by Michael Hargis. A few years later Clay Nutting joined hargis as the festival's co-organizer. The event quickly grew into a multi-day music festival in Cesar Chavez park and in 2014 organizers change the name and moved the festival to West Sacramento.

Slideshow of scenes from TBD Fest 2015 by Andrew Nixon.

Some vendors have vented their frustrations on social media.

Jason Malmberg provided graphic design services for the festival. He shared the Bee article publically on his Facebook page with this comment: “Sigh. Yup. Well, at least I got a massive portfolio piece out of it.”

Malmberg declined to speak in detail on record.