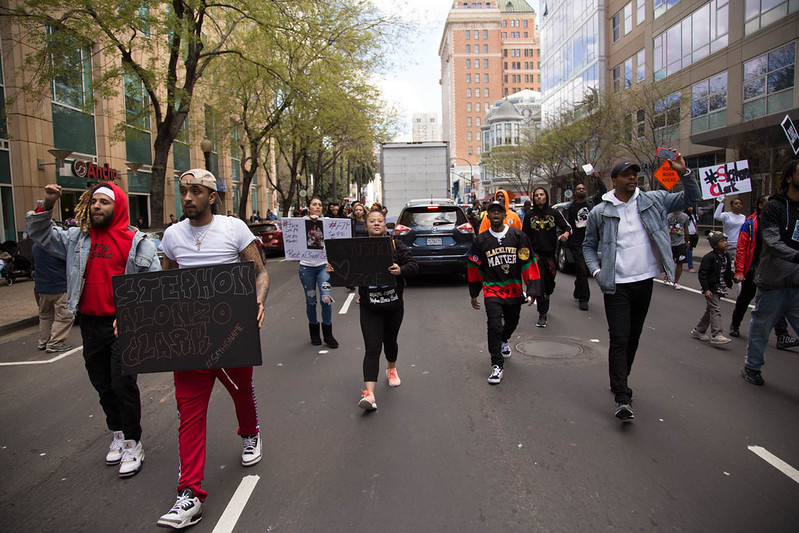 Slideshow of activists on the second day of protests over the shooting of Stephon Clark.  Andrew Nixon / Capital Public Radio

Demonstrators spilled into the streets of downtown Sacramento for a second straight day to protest the shooting of Stephon Clark by police. And Friday evening, a vigil in South Sacramento evolved into a large-scale march through the neighborhoods near where Clark was killed.

Face-off with CHP at freeway entrance, but no one attempts to overtake Interstate 5 for second day in a row yet pic.twitter.com/gMteCLgy3Q

Protesters face off with CHP near an entrance to Interstate 5 on Friday, March 23, the day after demonstrators shut down that freeway. Nick Miller / Capital Public Radio

Protesters began on Friday by halting traffic on Tower Bridge just after noon, then marched in the middle of the street to the state Capitol, stopping traffic and chanting:

The gathering was impromptu, and activists zigzagged through the streets, choosing where to go next on a whim.

Elijah Brown, who grew up with Clark, said he was really heartbroken by his death.

“I live 15 minutes away from where it happened, and you hear it, you say 'Man, that could of been me. That could have been my brother.’"

UC Davis student Francisco Ferreya attended the protest and said that it didn't matter that he never knew Clark, because police brutality is continually “happening to our people."

Sacramento police shot Clark, an unarmed black man, in the backyard of his grandparents’ home on Sunday. The department released video of the shooting on Wednesday. Since, Clark's death has drawn national attention — and outrage. 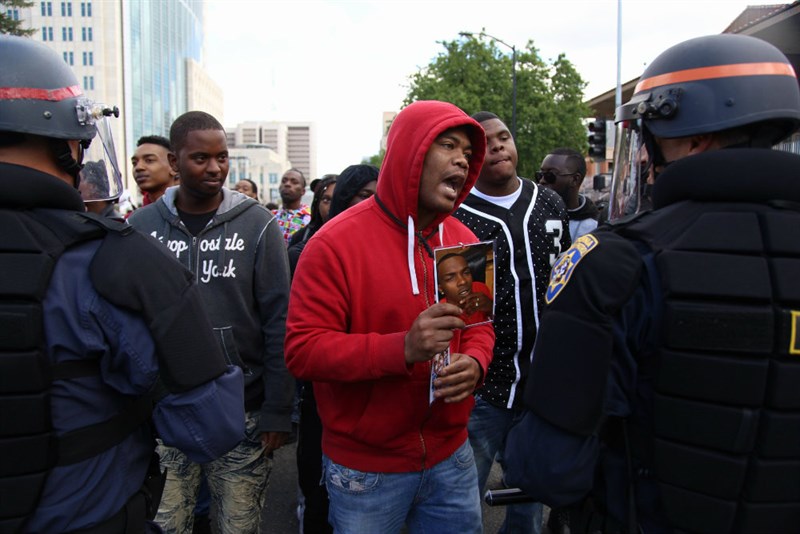 A protester confronts a CHP officer during a second straight day of demonstrations in Sacramento to protest the police shooting of Stephon Clark.Andrew Nixon / Capital Public Radio

Kimberly Smalls didn't know Clark, but planned to attend the vigil with her children. Smalls said she can’t be like people who teach their kids to trust the police.

The crowd spoke of wanting to shut down the freeway again. California Highway Patrol officers on foot, bikes and horses formed a line blocking protesters at the onramp to Interstate 5, however, and protesters did not challenge them.

Tension is high as CHP block protestors from entering I-5 #blacklivesmatter #sacramento pic.twitter.com/ZsICSrPwcN

The demonstrators returned to the Tower Bridge and the Capitol, and continued to protest into the evening. In Midtown, activists briefly shut down access to the Business 80 freeway before the protesters dispersed around sunset.

A spokesman with the Sacramento Police Department said there was one arrest on Friday: an individual who they say broke a window on a commuter bus.

Also on Friday, a large crowd attended a vigil near the home of Clark's grandparents at 7 p.m. Community activists and family members spoke to the crowd, and many held candles.

Khaya Osborne, an 18 year old from South Sacramento, said she was at the first vigil for Clark on Monday night at the Meadowview light rail station.

“Today is about showing folks just exactly what it is to be black and live in a world," she said, "in which, you are denied the liberties and rights that your peers are given.”

She said she wasn't surprised to see this happen in her home town. "This is America, and this is what happens in America. A lot of people are so shocked that this is happening in Sacramento. It’s been happening everywhere and, unfortunately, as one of the most diverse cities in this nation, we still have tons and tons of racism to deal with." 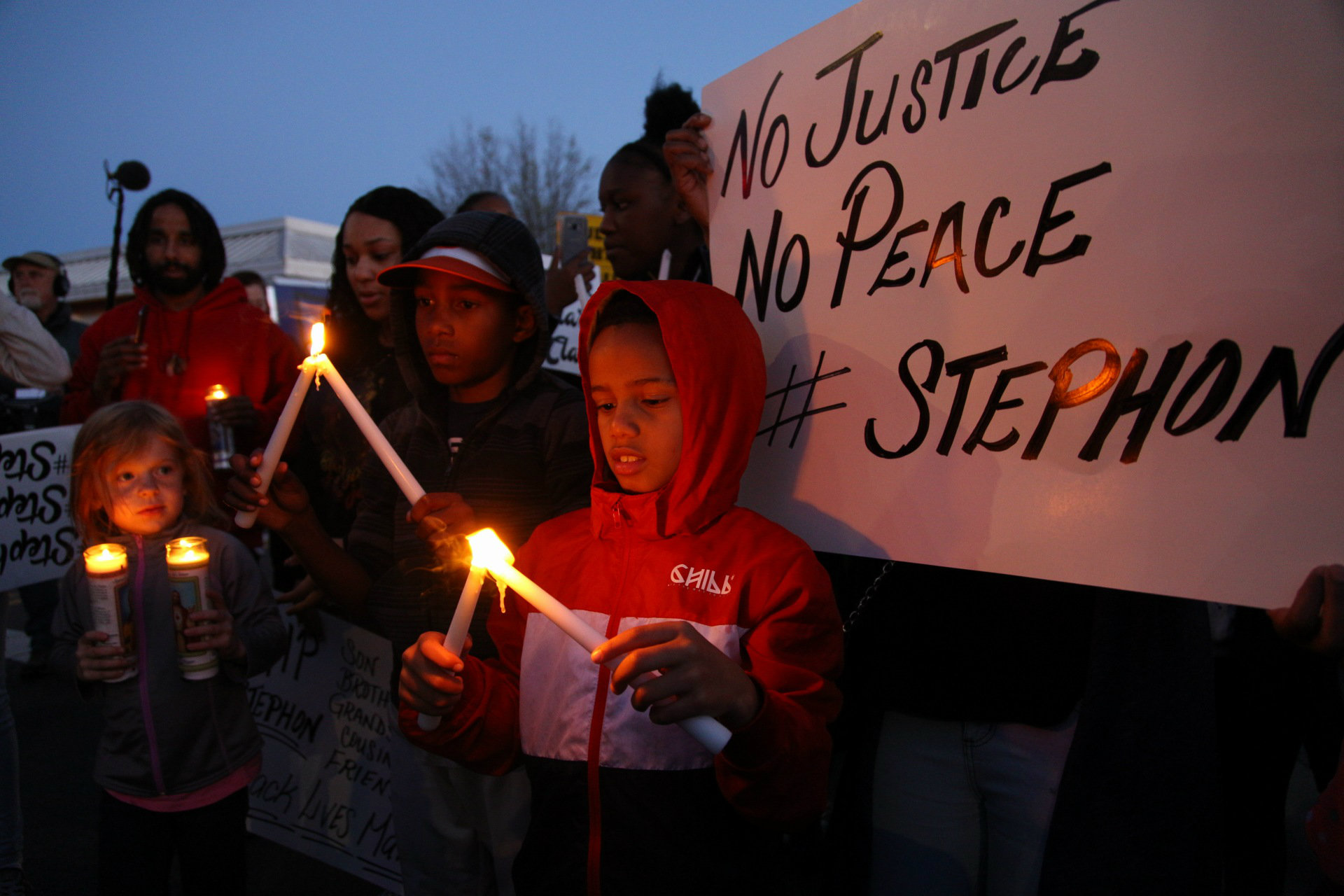 Loyonna Yohannes, 22, is a local community activist. "Today is about the injustice that is constantly happening here in Sacramento," she said.

"Tonight, I’ll light a candle for his memory and, like you hear, our community stands with us," Yohannes said.

Clark's brother, Stevonte Clark, appeared midway through the vigil, rolling up to the intersection and blocking traffic in an SUV. He gave a heart-on-sleeve speech and rallied the crowd to honor his slain brother.

After the vigil, protesters marched for more than two hours through South Sacramento's neighborhoods. People emerged from their homes wrapped in blankets and wearing pajamas. Others grabbed their kids and even dogs to join in the march.

The marchers would stop in major intersections, where speeches and chants of "Cells up!" — holding their phones in the air — grew louder. Onlookers followed the march in cars, blasting music and honking. 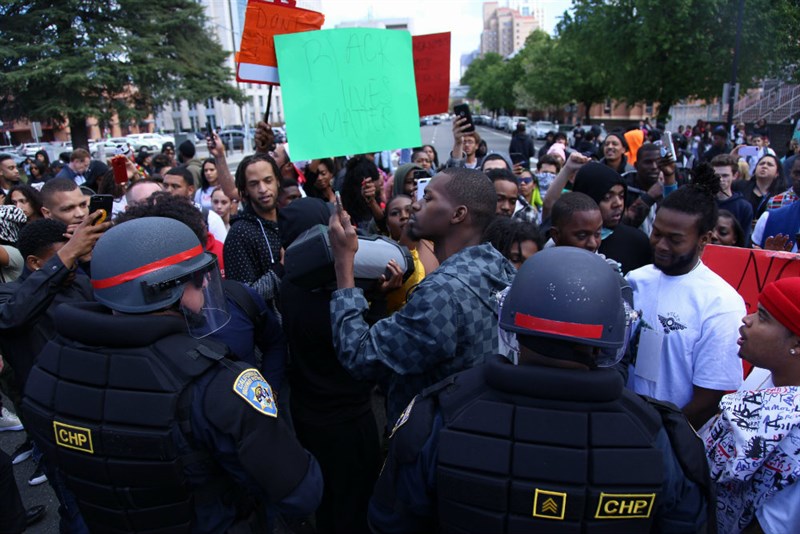 In an interview with Capital Public Radio on Friday, Mayor Darrell Steinberg said he had a "different reaction" to what occurred during the protests this week.

"I know that it was chaotic," he said. "But what I'm pleased about is that, with all the understandable anger, and all the pain and all the grieving ... that it was really mostly peaceful. There were no arrests, and nobody got hurt. And I think that speaks to the strength of Sacramento."

Sacramento County Vote Centers Are Open For The March Primary. Here's Where To Find Them.