“He would call and say, 'Are you guys OK? I'm coming by,’” she said. “And if it was nighttime, he would spend the night, and in the morning he would be the person that would help."

His grandfather, Tommy Thompson, is in a wheelchair, and his grandmother, Sequita Thompson, can’t take care of him by herself. Lewis says Clark had been at his grandparents’ home Sunday afternoon, but left later in the day.

That night, the 22-year-old father of two ended up shot and dead in their backyard. 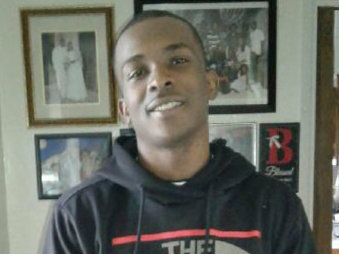 Stephon Clark, who was shot and killed by Sacramento police officers this past Sunday in Meadowview. Photo Courtesy of Sonia Lewis

Two Sacramento police officers killed Clark at 9:26 p.m., about 13 minutes after the department says it received a 911 call that someone was breaking car windows on the 7500 block of 29th Street, where his grandparents live.

A police statement says a Sacramento County Sheriff’s Department helicopter pilot spotted Clark some time after 9:13 p.m. and witnessed him shatter a sliding glass back door of a neighboring home.

The pilot directed law enforcement to his location. Two cops chased Clark into his grandparents’ backyard, according to a department statement, and shot at him 20 times. It is unknown how many times he was hit.

The officers claim that Clark walked toward them while holding something in his hand. On Monday morning, a department spokesperson described Clark as possessing a “tool bar” at some point during the pursuit; they initially declined to explain what that item was to The Sacramento Bee, but now say it may have been a downspout from a rain gutter.

Sacramento PD later said the only item found near Clark after he was killed was a cell phone.

According to Lewis, Clark might have been in the backyard because that’s how he gets inside his grandparents’ home. She says visitors knew to call ahead, or go to the back of the house, because Tommy Thompson lived in the rear of the home.

“[His] doorbell has not worked for 20 years,” Lewis explained. “Often the younger kids will go around back and knock on ‘Tommy T’s’ window to say, ‘Hey, somebody push the garage remote so that we can get in.’”

She says Sequita Thompson did not realize her grandson had been killed until she looked out the window four hours after the shooting, at 1:30 a.m. Lewis says law enforcement officers were inside the home before then, but did not disclose that there was a body in their backyard.

Officers who interviewed the family after the shooting say they were unaware Clark was related to Thompsons.

Videos on Facebook and social media show more than 100 individuals spoke out against Clark’s death at a vigil on Monday evening at the light rail station in Meadowview.

At Tuesday night’s City Council meeting, about a dozen people spoke about the shooting.

Richard Owen, founder of Law Enforcement Accountability Directive, which advocates for transparency in police practices, said the shooting of Clark is a test of recent use-of-force rules passed by the council.

“You authorized non-lethal weapons. Why weren’t non-lethal weapons used in this instance?” Owen asked at the meeting. “Those cameras. They better have not accidentally gone off during this shooting. We need to see all three cameras from the helicopter and the two police officers. Why weren’t the dogs deployed? Did Mr. Clark really have to die? It doesn’t seem that way to the community.”

Police Chief Daniel Hahn reported to council at the meeting and said body-camera video of the shooting incident could be ready to show the family “within a day or two.” He confirmed that both officers who shot at Clark were equipped with cameras, and that they could be made public this week.

City council passed a law in 2016, after the controversial shooting of Joseph Mann, that requires body-camera video in an officer-involved shooting to be released within 30 days of an incident.

Councilman Larry Carr, who represents the district where Clark’s grandparents live, said the community had many questions about the shooting. He asked Hahn if Clark was shot in the back. The chief deferred to the coroner.

Mayor Darrell Steinberg asked Hahn whether investigation of the shooting, which will be conducted in partnership with the city’s oversight office and the Sacramento County District Attorney, would look at whether the number of shots fired by the officers was excessive. Hahn said it would, and added that they also would ask why less-lethal force was not used.

Police said that, after Clark was shot, officers waited five minutes before approaching him to perform CPR. Hahn said the investigation would look into why there was a delay.

Barry Accius, a community activist who works with youth of color and who attended Monday’s vigil, said that Sacramento was promised a new way of policing under Hahn — but that Clark’s death looks like an execution without due process.

"We don't care necessarily about what he did to be chased down or whatever they're saying,” Accius said. “We want to know what was the point and the reason for excessive force to be used against this young man."

The department says one officer had been employed by the department for two years, while the other has been employed for four. Each had worked for other agencies for four years before joining. They are both on paid leave during the investigation into the shooting.