7:40 p.m. - Cal Fire says containment has grown to 25 percent, with burned acreage holding at 1,700. Shifting winds are causing smoky skies in the Truckee area, and officials recommend that outdoor activities be limited.

Crews continuing to make progress on the #LowellFire in Nevada County. The fire is now 1,700 acres & 25% contained. Winds still a threat.

Smoke in #Truckee is from the #LowellFire burning near Colfax, Gold Run and Alta. http://t.co/FWR5TiRQew

CalFire is reporting 1,800 threatened structures in Placer and Nevada counties.

#LowellFire Red Cross shelter at Nevada Union high school has been moved to 1866 Ridge Rd, Grass Valley, CA for the comfort of evacuees.

2:35 p.m. - The National Weather Service says the winds in the Sierra will change direction tonight, possibly affecting the Lowell Fire.

To Volunteer or Donate Feed for Animals at #LowellFire Evacuation Center, contact Pat Ehlers at 530-916-6506. http://t.co/Mm9RSeop3h

Three firefighters were treated and released Sunday, and one was kept in the hospital. His burns were more severe, but non-life threatening.

"They're doing well," says Mike Mohler, with Cal Fire. "Three were treated and released [Sunday] evening. The other one did have to remain in the hospital. His burns were a little bit more serious but non-life threatening."

The fire was sparked in the Steep Hollow Drainage. It's stayed in that area and followed the path of the drainage.

"So the fire did move a little bit [Sunday]," says Mohler. "It increased in size a little bit. They're going to work on reinforcing the containment lines that are in place, and building more. They'll have to see what the winds do this afternoon."

"The winds were still out of the south [Sunday] afternoon," he says. "But today they're expecting some changes in the wind direction, which could create a problem."

Cal Fire expects to achieve full containment of the fire on Aug. 1.

8:30 a.m.: The Lowell Fire is still burning west of Alta in Placer and Nevada counties. Cal Fire says the blaze grew by another 200 acres overnight. The total acreage burned is now 1,700.

Thanks to cooler temperatures and lighter winds overnight, containment is up to 20 percent.

Nearly 2,000 structures are threatened, but no buildings have suffered damage.

Four firefighters were injured yesterday and airlifted to the UC Davis Medical Center in Sacramento for burns.

"I'd say CalFire, law enforcement, is working very aggressively to determine what exactly started this fire," he says. "And as soon as we have it, we will get it out."

The fire also prompted an emergency closure for parts of the Tahoe National Forest.

A statement from the U.S. Forest Service states the closure is taking effect in order to support fire suppression and personnel safety, as well as public safety and resource protection.

The closure is on the south side of the Yuba River Ranger District and includes Tahoe National Forest lands, roads and trails between Highway 20 and Interstate 80. 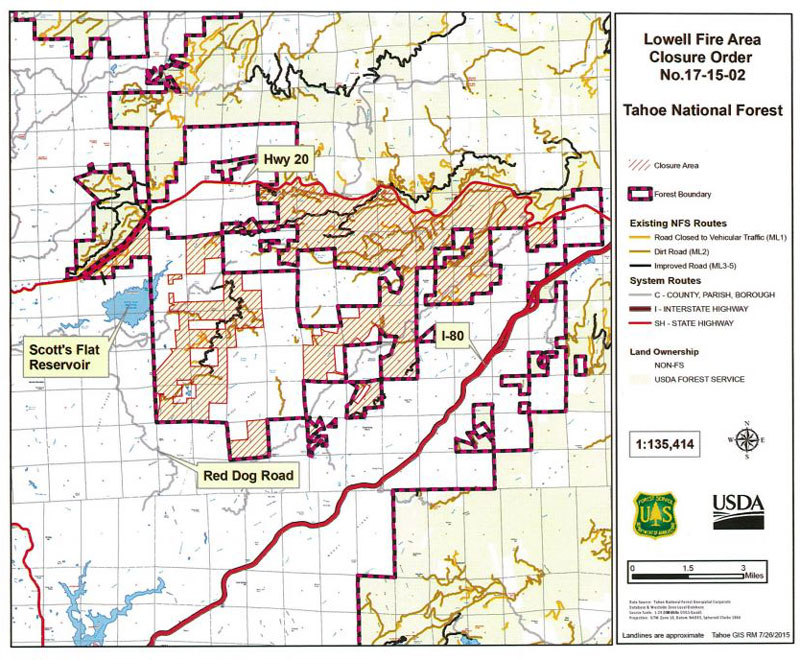 7:30 a.m: Four firefighters battling the Lowell Fire in Placer and Nevada Counties, west of Alta, were injured over the weekend.

Cal Fire says the injured firefighters were treated for burns at UC Davis Medical and are in good condition.

The Lowell Fire is about 20 percent contained and about 1,700 acres. Cal Fire spokesman Captain Mike Mohler says law enforcement is working to determine the cause of the fire and hopes to make progress Monday.

"Right now, firefighters overnight it sounds like they had some success with the weather, the humidity increase. The wind was on our side," says Mohler. "But again, we have hot temperatures moving into the area. Again, winds that are going to pose a problem. So we're really cautiously optimistic to see what today brings."

About 1,800 structures are threatened by the fire.

Soft road closures are in place at: 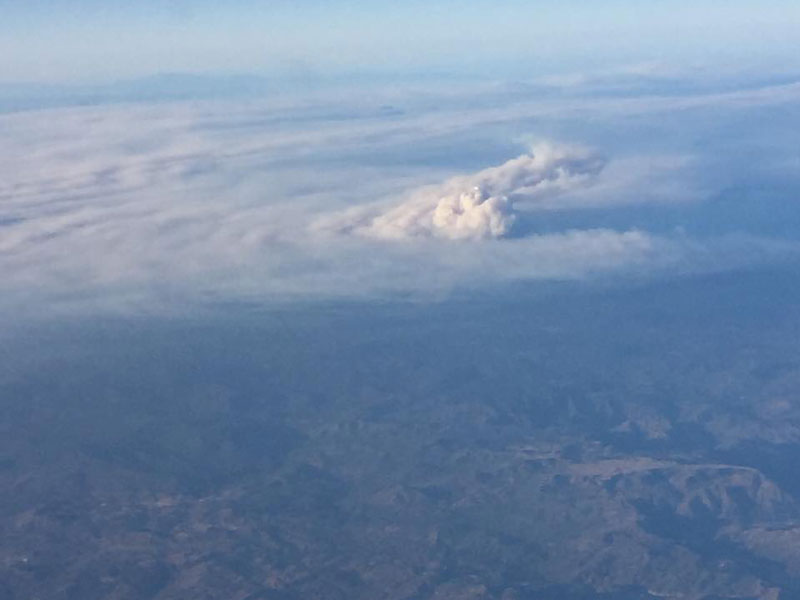 Original Post: Cal Fire says the blaze is holding at 1,500 acres and about 15 percent containment. About 1,800 homes and structures are threatened, but no buildings have suffered damage and crews are in the area, ready to respond.

Overnight, crews had some success containing the fire with wind and humidity levels helping out. Captain Mike Mohler with CalFire, says crews are cautiously optimistic, but hot temperatures and winds could pose a problem later Monday.

Mohler says the cause has not been determined yet.

"I'd say Cal Fire, law enforcement, is working very aggressively to determine what exactly started this fire," says Mohler. "And as soon as we have it, we will get it out."

The four firefighters, two with Cal Fire and two with the U.S. Forest Service, were transported to UC Davis Medical Center and treated for burns.

Three are expected to be treated and released. Berlant says the fourth has injuries that are serious but not life-threatening.

Mandatory evacuations are still in place for You Bet, Red Dog, Lowell Hill and Chaulk Bluff area. An evacuation advisory is in place for the northeastern portion of Cascade Shores and in the Gold Run/Alta area. 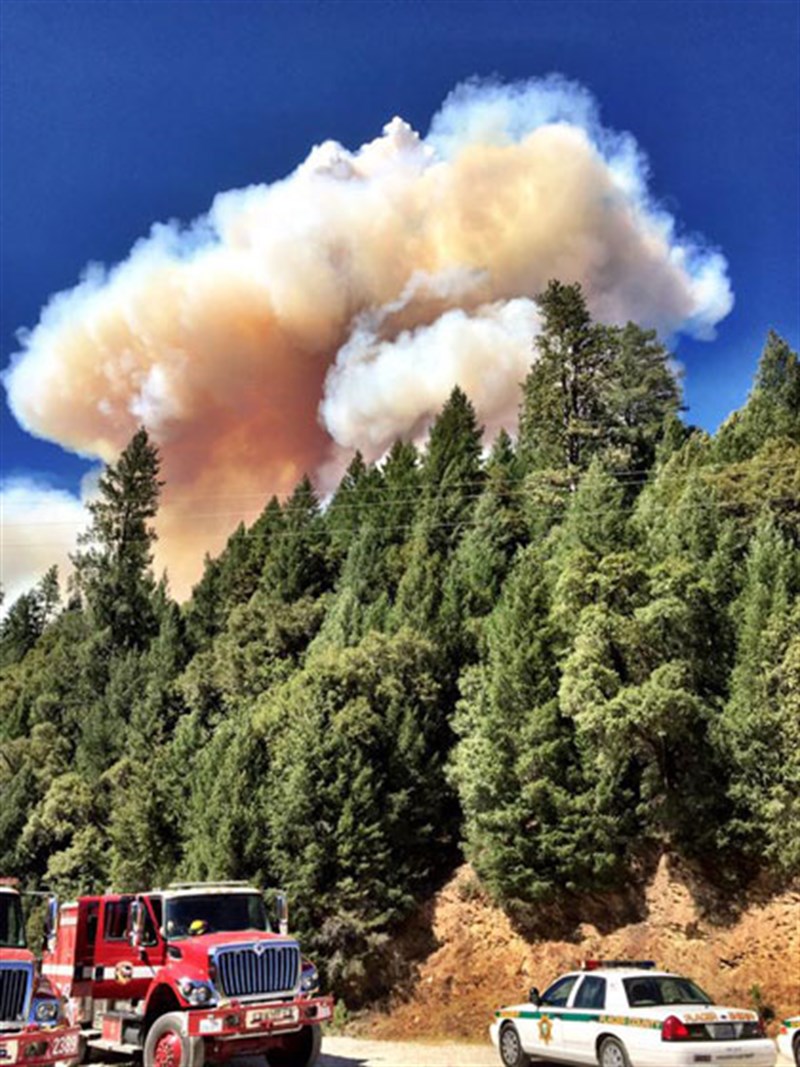 Capital Public Radio Staff and The Associated Press contributed to this report.