Nearly a dozen hospitals around the country are taking unusual steps to intervene in the lives of some victims of violence with the goal of keeping them from returning to emergency rooms and minimizing their involvement with the criminal justice system.

The trauma center at South Sacramento Kaiser in the crime-ridden area known as the "Mack Road Corridor" has adopted the model and is seeing some positive results. Anyone who gets shot or stabbed in south Sacramento ends up at this Level Two Trauma Center. The first stop is at the Resuscitation Room.

Patients move from ER to intervention 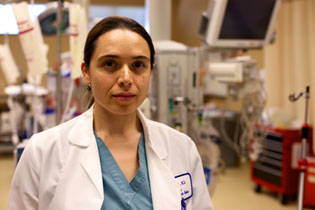 "This is where we get the patients. They come off the ambulance over there and roll in here and this where we see them," said Dr. Maya Leggett, trauma surgeon working in the emergency room on a Friday night. "Some are worse than others. I mean it really all comes down to blood pressure and bleeding and airway. I'd like to say it's not mayhem. It's controlled chaos."

Leggett said the next step is to get the patient to the operating room or wherever they need to be for their care. In 2011, this Resuscitation Room provided emergency treatment for 130 people with gunshot or stab wounds. Half of them were between the ages of 15 and 24. Thirty-five of those patients had gunshot wounds and 28 had stab wounds, according to Kaiser Permanente Trauma Services.

LeAndre Williams, a high school rapper in South Sacramento was a stabbing victim last October, just before his 18th birthday, and was treated at the trauma center. "I was stabbed in my side, and I was stabbed in my left eye leaving me legally blind, I can't see out of it anymore. I've got like 18 stitches down from my chest to my pelvis. I've got like 8 more over here on the side going the other way," Williams said.

The aspiring rap artist, who goes by the name "Yung Dre" in the music world, wears his hair in long cornrows, sports a sparse goatee and wears a black patch where his left eye used to be. "Me and my brothers make songs all the time, post them on Facebook, hoping the right person hears it. There's one called 'Cold World.' We've got an actual video to that one."

Williams is vague on the details about why he was stabbed. "I wasn't really a bad kid," Williams said. "I wasn't causing problems. I wasn't into gang-bangin'. It wasn't a gang-related incident, you know." Williams said he ended up in the hospital because he was "doing something wrong" and that he'd made some bad decisions. "Anybody can get hurt just walking down the street, it can happen to anybody," he said.

He also doesn't remember the pain of being stabbed. "At the time, you know, I didn't really feel nothing. Just kind of went numb," Williams said. "Recovery hurt more than actually getting stabbed, 'cause when I got stabbed it left a lot of scar tissue and then that caused me to have a small bowel obstruction where all my intestines were all twisted up and stuff."

It's moments of pain and when patients are still recovering in the hospital when the Sacramento Violence Intervention Program, or SVIP, steps in. "What happens is we get a phone call from the emergency room or the operating room and we come down to do a bedside," said DeAngelo Mack, an intervention specialist with SVIP. "It's a teachable moment, definitely. When a person is shot or stabbed we find that at that moment they're much more reachable than if it was maybe a graze or a bloody nose."

Although Williams was still groggy at the time, he said SVIP sounded good. "I just seen people that were trying to help me. They were reaching out for me and I took the help because I wasn't going to turn down nobody that was trying to help me. DeAngelo's been the one that I've been connecting with the most." 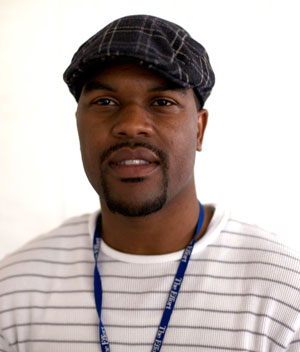 Kaiser steps up to help

Mack works for a Sacramento social service agency called The Effort, which teamed with Kaiser to create SVIP. Figures from 2010 showed that the Center Parkway and Mack Road Corridor was the number one location for homicides in Sacramento, so Kaiser decided something needed to be done, and the new trauma center was targeted for the intervention program.

SVIP is modeled after a hospital-based violence intervention program in Oakland called "Caught in the Crossfire." Similar programs are operating at San Francisco General Hospital and the UC Davis Medical Center in Sacramento, as well as in Las Vegas, Milwaukee, Chicago, Baltimore, Philadelphia and Boston.

Mack and another intervention specialist counsel a total of 36 clients. Nearly all of them are young men. Mack and his colleague promote positive alternatives to violence and coordinate services for youth and their families by providing information, referrals and intensive follow-up services for up to one-year. When Mack arrives at the emergency room to meet a prospective client, the first thing he talks to them about is their injury.

Gang violence not always the problem

Mack said much of the violence that happens is rooted in misunderstandings. "I think the generation now has a very difficult time communicating with each other. What we're finding is that they're not all gang-related and most of them are just kids getting into trouble. Being in the wrong place at the wrong time," Mack said.

Steering clients closer to the "right place" includes field trips to art museums and even driving them through less threatening neighborhoods to show them what's possible and that there's another world out there. Mack said keeping clients away from violence and giving them a sense of hope has wider implications for the whole community.

"Most of our young people have not even been out of their neighborhoods," Mack said."We've taken kids to places like San Francisco and they've been blown away because they've never been out of Sacramento. The clients of ours, they are the community and so the community on a whole would want to invest in something like this because what we're doing is transforming the minds of these participants so that we can get them back in the community so they can start making some positive changes.

Mack meets with clients individually and in group sessions at least once a week. He defines success as seeing victims of violence get healthy, graduate from high school or college, work in some capacity and live in relatively safe neighborhoods. But there's still that random violence."

The young men Mack works with want to change to change their lives, but they still have to go home to neighborhoods where violence is a daily reality and an everyday threat. "Some of the violence I'm seeing, it continues to get younger and younger and it doesn't matter if you're part of a certain gang or from a certain side of town. You could be a regular person walking down the street and violence can find you," he said.

"We know we're strangers,
I don't know you, you don't know me,
but what can I do to help?"
-- DeAngelo Mack

Mack said SVIP offers young people a way out of trouble. "It's okay if clients are faced with challenges as long as they have someone to show them a way out. Having some other place to go or some other person to turn to gives them a choice. I think our program offers choice, right from the start. We're a program that walks into a hospital room and says 'hey, we want to help you.' We know we're strangers, I don't know you, you don't know me, but what can I do to help?'"

Still more work to do

Accepting help has put Williams on the right path to stay out of trouble. "I got stabbed, yeah, but I'm not going to let that stop me," he said. "I'm not going to let it hold me down. I'm focusing on getting my school work done so that I can graduate high school, get my diploma, start going to college."

Williams still needs to get a glass eye, and he goes back to the hospital for follow-up appointments where Leggett keeps track of his recovery. "We've been able to see him a couple of times in clinic here," she said. "He's a good kid. He's working hard on a lot of stuff."

"Lord forgive me for the sins I committed,

But you know nobody's perfect in this world that we live in,

And my guard's up, almost lost my life once,

Already scarred up, so now I'm bein' twice as cautious,

Gassed and gettin' so exhausted,

Enemies, tryin' put me in a coffin,

'Cause they see what I'm becoming, you don't see that often"

Leggett said concern for her own two, young children contributes to her interest in SVIP "They're still young. I'm still shielding them, but that can't happen forever, so you do this job for community reasons, too. I want to make it better for my kids. It's true that south Sacramento might have a bad name, but (the violence) is not isolated. It's not just the Mack Corridor.

SVIP In the Media