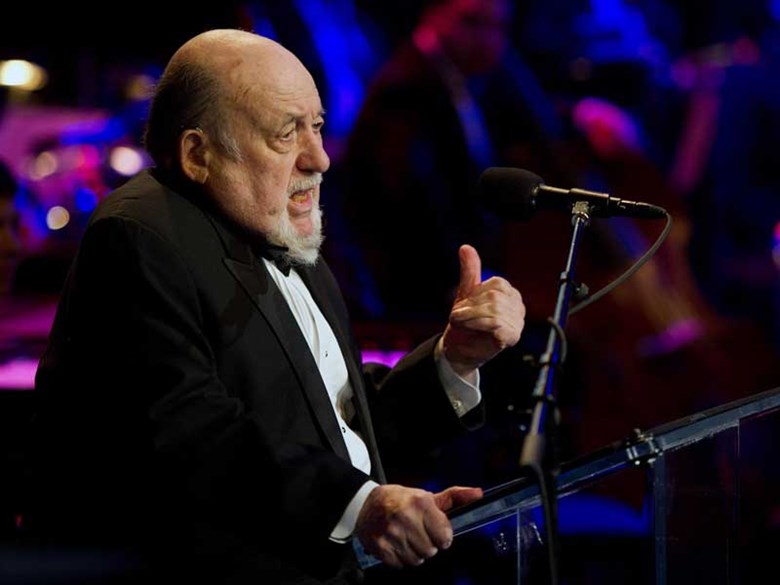 Jazz producer and record label found Orrin Keepnews died on Sunday at the age of 91. Keepnews was behind landmark recordings by jazz legends like Thelonious Monk, Bill Evans and Cannonball Adderley.

The jazz world has lost one of its biggest fans. Orrin Keepnews was a writer, a long-time jazz producer and multiple Grammy winner. He helped launch one of the most important jazz labels of the 1950s and through it, the careers of numerous musicians. Keepnews died yesterday at his home in California, just shy of his 92nd birthday. NPR's Elizabeth Blair has this appreciation.

BLAIR: Cannonball Adderley, who Keepnews called a formidable improviser and pianist Bill Evans - here they are together on a 1961 session Keepnews produced for his seminal label, Riverside Records.

BLAIR: Orrin Keepnews got hooked on jazz when he was a teenager. After serving during World War II, he wrote for jazz magazines. In 1953, he and a friend founded Riverside. Keepnews was known for not only producing musicians, but listening to what they had to say. In 1993 he told NPR about one episode with Cannonball Adderley.

ORRIN KEEPNEWS: He came bursting in on me and said, approximately, I've heard this great guitarist. We've got to get him for the label.

BLAIR: The guitarist was Wes Montgomery. On Adderley's insistence, Keepnews flew to Indianapolis where Montgomery was playing into the early hours of the morning to hear for himself.

KEEPNEWS: At which point I very melodramatically whipped out of my pocket a standard American Federation of Musicians exclusive recording contract. And Wes, on the spot, signed with Riverside as dawn broke over Indianapolis on that day in the fall of 1959. And I don't know why they haven't used that as the climax of a jazz movie - maybe because there are hardly any jazz movies.

BLAIR: Orrin Keepnews was keenly aware that jazz would never be all that profitable. In 1964, Riverside Records went bankrupt. He struggled for a couple of years, but eventually went on to launch two more labels. In 1972, Orrin Keepnews was on a panel at the Rutgers Institute for Jazz Studies. He said navigating the line between profitability and artistry was like walking a tight rope. He said we are stuck with our own integrity. For many musicians, his integrity meant a lot. Elizabeth Blair, NPR News.

Copyright © 2015 NPR. All rights reserved. No quotes from the materials contained herein may be used in any media without attribution to NPR. This transcript is provided for personal, noncommercial use only, pursuant to our Terms of Use. Any other use requires NPR's prior permission. Visit our permissions page for further information.

NPR transcripts are created on a rush deadline by a contractor for NPR, and accuracy and availability may vary. This text may not be in its final form and may be updated or revised in the future. Please be aware that the authoritative record of NPR's programming is the audio.

See this story on NPR.org

Copyright © 2015 NPR. For personal, noncommercial use only. See Terms of Use. For other uses, prior permission required.