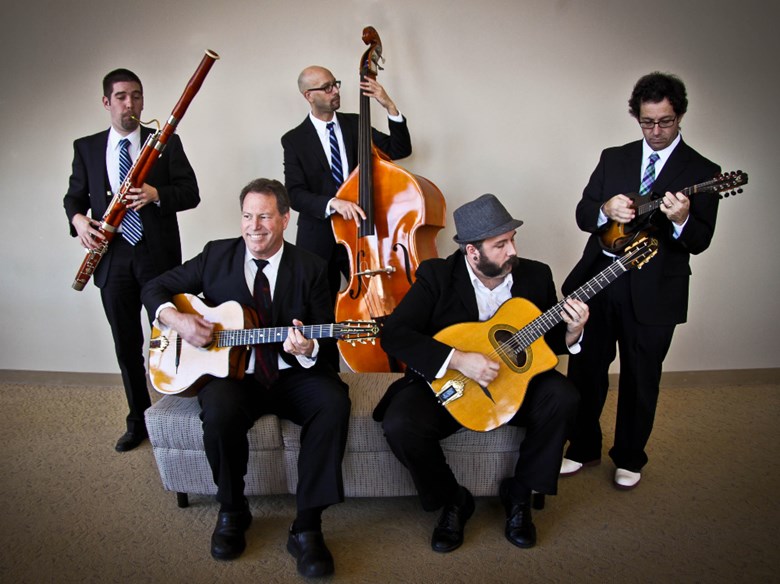 Jacqueline Rocamora / Courtesy of the artist

No doubt you’ve heard strains of Gypsy Jazz as background music in films or on TV.

“For many people when they hear it, it will sound a little familiar," said Jake Myers. "Most people have heard it before somewhere even if they don’t know that.”

Myers is a musician in the Modesto-based group Hot Club Faux Gitane – which, in French, means “Hot Club of the Fake Gypsies.” Myers points out their name is a reference to the first Gypsy Jazz group – The Quintet of the Hot Club of France – formed in 1934 by French guitarist Django Reinhardt.

“I started learning the guitar when I was a little kid. I remember people mentioning Django Reinhardt’s name to me. I remember listening to some of his recordings and thinking ‘wow, I don’t know how a human being can play the guitar like that.’”

“The thing that’s the most attractive about it is it’s a really swinging, rollicking, wonderfully fun music,” said Myers.

This version of “Puttin’ on the Ritz” by Hot Club Faux Gitane illustrates what makes the band unique in Gypsy Jazz circles – in addition to the usual stringed instruments such as guitars, mandolin and the bass, the lineup includes bassoon played by Dave Wells.

"As far as I can tell, I’m the first Gypsy Jazz bassoonist out there,” said Wells.

Hot Club Faux Gitane is one of dozens of “Hot Club” or Gypsy Jazz groups on the West Coast and around the world. There’s a Hot Club of San Francisco which bills itself as the longest running Gypsy Jazz ensemble in the country; Pearl Django out of the Seattle area; there’s even a group called Hot Club of Carmichael. And throughout the country there are “DjangoFests” – music festivals devoted to Gypsy Jazz. The Bay Area’s annual DjangoFest was held last month in Mill Valley.

Dave Wells of Hot Club Faux Gitane says the group plays at clubs, restaurants and farmer’s markets in the region. Most group members are in their 30s and 40s. Their fan-base is in the Baby Boomer age range. But Wells says a growing number of Generation X is getting into the music, including at a recent show.

“I think our most enthusiastic audience member was I’d say probably (in his) late 20s and he clearly had an understanding of the genre and was requesting tunes. There seems to be something about the music that’s captivating and even though it is really 80-plus years old at this point, it can still seem very fresh," said Wells. "It ties into some of the trends in vintage and ways of reconnecting with the past.”

“It really does kind of run the gamut because we play at the Shady Lady Bar here in town where mainly twenty-somethings (congregate) and they seem to enjoy it quite a bit," Billeci explained. "But this music has been used so much in some of Woody Allen’s movies and I think more mature people tend to be into his films so they make the connection between this style of music and those movies.”

Billeci points out the improvisation in Gypsy Jazz, when a musician takes a solo on their instrument, is rooted in Django Reinhardt’s accessible style; nothing too avant garde that would scare most listeners away.

“Django Reinhardt, he never really got into playing outside the chord changes. Most of his stuff is standard harmony-based, it’s just fast…just incredible technical ability.”

And for classically trained Dave Wells, the world’s only Gypsy Jazz bassoonist that we know of who is relatively new to jazz, standard harmony-based is more appealing than playing outside the chord changes.

“Listening to some of the great tenor saxophone players, say John Coltrane, going way outside the tune he’s playing, can be a little daunting to any new jazz player, particularly on something as technically complex and difficult  as the bassoon it feels pretty at home in Gypsy Jazz.”

Wells and his band mate Jack Myers of Hot Club Faux Gitane say they don’t expect to be able to quit their day jobs – they both teach. But they expect to keep a full schedule of concerts…and have fun playing music that sounds as vibrant as when it was created in France 80 years ago.

“It’s been going this long, it’s probably not going to stop," said Meyers.