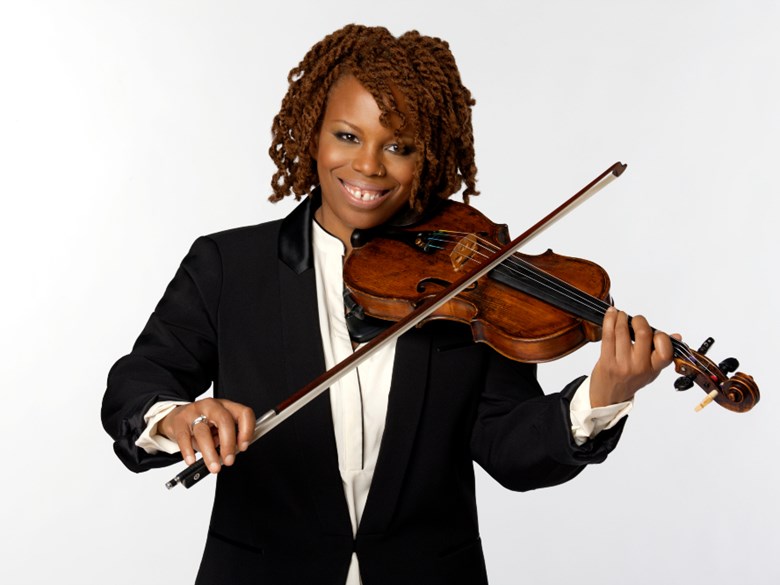 Capital Public Radio's Paul Conley talked with Regina Carter back in 2008 - and we thought it was worthy of a throwback. Carter will perform November 1, 2014 at the Mondavi Center in Davis.

Jazz violinists are a rare breed. Stephane Grappelli and Jean-Luc Ponty are among the few who achieved star status. Almost as rare in the male-dominated world of jazz are female instrumentalists. But Regina Carter has broken through on both fronts.

In the course of my conversation with Regina Carter, it didn’t take long to discover one of the keys to her success.

“I don’t take no for an answer, I just keep trying to find a way in,” she explained.

Back in the early 90’s, that feisty resolve helped Carter get her first CD on the air, overcoming jazz radio’s prevailing attitude about her chosen instrument.

“I had several radio stations tell me they wouldn’t play the CD because it was violin and their listeners didn’t tend to gravitate toward violin in jazz. But I just had to keep plugging away and luckily I had a friend that worked at one of the stations that did play the CD and then it caught on and other stations started to play it.”

Because Carter’s talent is equal to her tenacity, she quickly won over fans, critics and colleagues. She has performed with Marian McPartland and Wynton Marsalis, been nominated for a Grammy with pianist Kenny Barron, and released half a dozen CD’s as a leader. Part of her appeal comes from Carter’s open approach to music.

“I play some Motown tunes, I play classical pieces that have been re-arranged in a jazz style. I play some quote unquote Latin music. And I tell people if they’re coming to hear me, or if they’re thinking about maybe coming, I say there’s something for everybody.”

Regina Carter first studied classical music in her native Detroit. When she was six she took a master class with Itzak Perlman, and in high school, her string quartet performed for famed conductor Yehudi Menuin. At the same time, Carter was experimenting with jazz.

“My teacher used to tell me I was going to ruin my career by playing jazz," recalled jazz. "And so after we played for Maestro Menuhin, my teacher said ‘oh she wants to play jazz.’  And I remember Yehudi Menuhin picking up his violin and playing a little blues lick and he said to my teacher ‘leave her alone.’  And so I was so thankful for that.”

“It was a small space so I was pretty close to him and just amazed, amazed and excited to see how much fun he was having, and just feeling his joy.  And for me that’s what jazz was.  And that’s what I wanted.  I wanted to play a music that every time I played, I was going to feel that joy and hopefully I could give the joy to an audience that he gave to us that night.”

During her own concerts, Carter delivers that joy in sometimes surprising ways…

Bach’s Prelude becomes the intro to “Little Brown Jug.” And other classical works are completely re-arranged.

“I love playing Grieg’s “Anitra’s Dance” as well. It takes people a minute and then they realize what it is, that they recognize it and really get a charge out of that.”

In the fall of 2006, Regina Carter was named a MacArthur Fellow by the John D and Catherine T MacArthur Foundation. The so-called “genius award” honors individuals who have shown exceptional creativity, originality and a marked capacity for self-direction. The award came with a $500,000 stipend, no strings attached. Carter laughed when she told me about her initial reaction to the news.

“First when he called I actually said ‘you know I’m sorry, I can’t give any money right now, maybe in a couple of months.’ I thought they were calling for money.  He says ‘no, no, we’re actually calling because you’ve been nominated and we’re giving you, you know, this amount of money.’  And I said ‘who is this?’ And he says ‘no, you obviously have never heard of the MacArthur Foundation.’ I said ‘I have, but why would you be calling me?’ And he explained the whole thing again.  I said ‘give me your name and your number,’ and I said ‘I’ll call you back.’

“And I remember when I hung up I just sat there for a long time stunned, staring out the living room window.”

She’s still working on how she’ll use the MacArthur money.  But no matter what she chooses to do, you can bet Regina Carter will continue breaking through barriers, attracting new audiences to the music she loves.

“When people say ‘I don’t like jazz’… there’s so much music that’s put under that word that I feel like I could lead them to a positive experience.“

Regina Carter's latest release, Southern Comfort, explores the folk songs and spirituals that her coal mining grandfather would have heard as he toiled in Alabama.