Stay Hydrated: A "Barricader's" Tips For Getting And Keeping A Spot At The Front Of A Concert 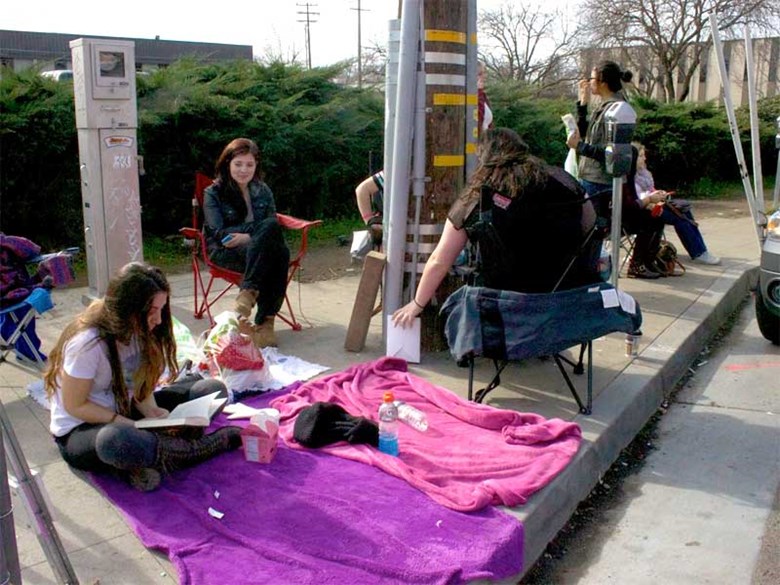 Amelia Zepeda from Chico reads a book on a blanket across from Ace Of Spades while waiting for a concert. She's been waiting since 6 a.m. and doors open at 7 p.m.

During the lunch rush over on “R” street, across from the hungry workers dining on the patios of Burgers & Brew and Magpie a small group of girls with folding chairs and blankets assembled on the sidewalk.

They’re waiting for a concert at Ace Of Spades taking place more than six hours away.

“We’ve done this like four times,” Ashley Fitzhugh from Sacramento said about camping out for a show. “The line gets super crazy and it’s sold out,”

Fitzhugh was last in line, having arrived just a half an hour prior. She got her tickets the day they came out, back in September. The show sold out almost immediately.

But still, waiting all day just to be front row... Fitzhugh said it’s all about the intimate experience people in the first row get at a show.

“You just want to have that connection,” Fitzhugh said. “It makes it a better experience.”

Amelia Zepeda, from Chico, was first line for the show. She set up camp at 6 a.m.

“We got a taste of ‘front row’ back in November seeing the 1975 and we just can’t go back,” she explained her need to be first. “We have to be ‘front row’ for every concert now. We won’t take anything less.”

Zepeda says if you want something badly enough you’ll make sacrifices. “I miss school. I’m a senior so I don’t take hard classes.” She said she arranges her school work with teachers so she can get the time off.

Zepeda’s advice for being a “barricader,” referring to the big metal barricade at shows separating the stage from the fans.

“You can’t quit. You really gotta want it. If you really want something you don’t care if you get sleep or food,” Zepeda said. “You have to know the ins and out of when people start lining up.”

Zepeda searches Tumblr using keywords like “barricade,” “Hozier concert,” “Hozier first in line,” to see when concert goers arrived for “first row” in other cities, and then she goes an hour before that.

Waiting for more than 12 hours on the street and then standing squished into a barricade for three hours is no small task. Zepeda said the key is staying hydrated throughout the day and going pee right before they open the doors.

“We go to the grocery store, we buy fruit and snacks. We always have mandarins.” Zepeda said. “We also stay hydrated all day because you get really hot and sweaty and you get really thirsty. You don’t want to drink water two hours before or else you’ll have to pee and you can’t leave because you don’t get your spot back.”

“Standing in line all day is really fun,” Zepeda said. “You can talk all day, you can read, you’re not at school. You get to meet new people, we make friends all the time.”