A Year After The Camp Fire, Paradise Pauses To Remember

(AP) — One year after Paradise burned, hundreds of people gathered in the parking lot of a former bank building in the Butte County town to pause for 85 seconds — one for each person who died.

The Rev. Richard Yale moved quietly through the crowd, wearing a blue vest with the words "emotional wellness volunteer" across the back. A man reached out and grabbed his shoulder as he passed by.

The crowd held onto each other for most of the ceremony on Friday morning. Holding hands, touching shoulders and remembering the terrible day when the Camp Fire, the most destructive wildfire in California history, swept through their town and destroyed roughly 19,000 buildings.

Daynielle Raynor fled her home that day. She went back in December to say goodbye, letting her two children each open a Christmas present in the driveway of their former home. She and her husband sifted through the ashes and, somehow, found her husband's wedding ring.

Now, they live in Arizona. But they came back to Paradise on Friday for closure, she said, especially so their children could see "that the world is bigger than we are, that they are not the only ones affected."

"That's been eye-opening," she said.

In the year since the fire, crews have removed more than 3.66 million tons of debris — twice the amount that was removed from the World Trade Center site following the 9/11 terrorist attacks. Twelve homes have been rebuilt so far, and the town is on track to issue 500 building permits by the end of the year.

Local officials have kept the town's traditions alive to encourage people to come back, including hosting Johnny Appleseed Days in the fall. In the spring, 220 seniors returned to Paradise High School for a graduation ceremony many thought would have been impossible just six months before. And in August, the Paradise High School football team played its first home game — a 42-0 rout that kicked off an undefeated season.

The fire's impacts have been felt far beyond Paradise. State officials say 20,000 people have moved to nearby Chico, boosting that city's population by more than 20% and putting a strain on public services.

Pacific Gas & Electric Corp. — the utility company whose equipment started the fire — filed for bankruptcy in January after facing billions of dollars' worth of potential damage claims.

The most poignant reminder of the fire's devastation was unveiled Friday when artist Jessie Mercer displayed a statue made from 12,000 keys donated by Paradise residents. The keys all belonged to things that burned, including homes, safes, jet skis and diaries. Together, they form the shape of a Phoenix, the mythical bird who dies in fire before being reborn from the ashes.

"If that is not Paradise, I don't know what is," Paradise Town Councilwoman Melissa Schuster said.

Hope was mixed with sadness for Myron Curtis. He lived in Paradise for 39 years, raising his children there before moving to Michigan to be closer to his daughter. The fire destroyed his home, photos of his wedding and baby photos of his kids. Friday, he and his wife drove through town and had trouble recognizing the place.

"It's always going to be hard to come back," he said.

Paradise Mayor Jody Jones said she wants the community to "celebrate the progress we've made and look to the future and what we can become."

"We were never lost," she said. 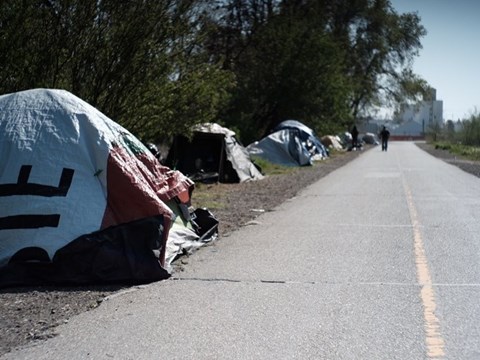