Smoking Ban At VA Facilities Has Some Veterans Fuming

(AP) — Daniel McClain sits at a picnic table outside the Sacramento VA Medical Center. He leans his cane against a bench and tilts his head up toward the military airplanes above. They’re practicing formations for the upcoming California Capital Airshow.

He identifies them immediately as Blue Angels.

“I was air defense artillery, I shot planes down,” he said. “So, I can hear ’em even before they come.”

The 46-year-old served in the Army for nine years, largely during the Gulf War. He visits the medical center roughly twice a week for physical therapy, PTSD support groups and other services. When he saw staff closing off the designated smoking areas a few weeks ago, he was taken aback.

“That’s kinda messed up, just to do that,” he said. “Because it was a smoking shelter. You’re not smoking in front of people. It’s an enclosed building. Nobody’s gonna be around it, nobody’s gonna be in it, unless they’re a smoker.” 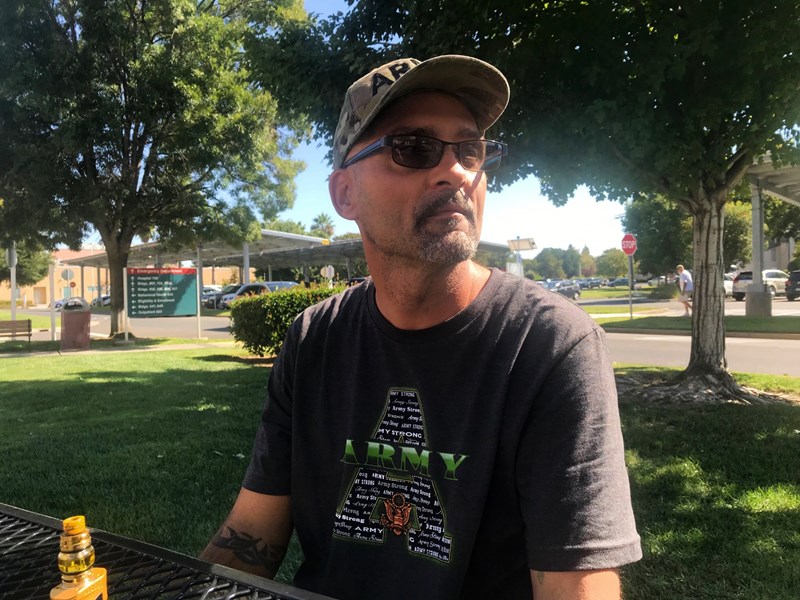 The facility is enforcing a nationwide smoking ban outside all Veterans Affairs medical facilities.

Smoking was already prohibited inside VA medical buildings, but now patients, employees and visitors will not be able to puff away anywhere on the grounds. Previously, smoking was allowed in designated shelters dotting the grounds of VA medical facilities. Posters and banners promoting the ban have been put up in facilities and the VA is alerting veterans through social media and letters. They have also held forums on the ban.

"This is a really good thing for our veterans and our staff," said Kevin Forrest, associate director of the Manchester VA, which serves 27,000 veterans. "It's a safer environment. It reduces fire risk. There is certainly evidence that smoking and second-hand exposure is a medical risk for our veterans."

The smoking ban was first announced this summer. It brings the facilities in line with bans already in place at 4,000 medical facilities and four national health care systems that have made their grounds smoke free.

But the move isn't without controversy. A third of veterans smoke, according to the Centers for Disease Control and Prevention, and many were introduced to the habit while serving. Tobacco has long been tied to military: Cigarette ads featured troops, and the culture of the service historically promoted smoking on the battlefield or as a welcome respite from the stress of combat.

"We recognize this is a difficult change for many folks," John D'Adamo, who is co-chairing the smoke-free implementation working group for VA Boston. It is gradually implementing the ban for the 62,000 veterans it serves over the coming months, including providing resources that could help veterans kick the habit. Violators will initially be warned of the policy and eventually VA police will enforce it.

"This is a major cultural change," he continued. "It's really been something often utilized for comradery, essentially a sense of community."Recommende

But even a gradual rollout is seen as too stringent for some smokers — and even some veterans who don't smoke. They argue that there should be some place for smoking at VA facilities and fear that some veterans may choose cigarettes or cigars over visiting their VA doctors.

"It's going a little too far," Gregory d'Arbonne, president of the New Hampshire chapter of the Association of the United States Army. "I'm against smoking, but there are people who smoke. When they do, they go outside and have this little smoking area. Now, what are they going to do?"

Jeff Holland, a 44-year-old marine veteran in Concord, gets a little testy when the talk turns to smoking.

"I get the aspect that it's a hospital and for all practical purposes you shouldn't be smoking inside the VA," Holland said. "But as far outside, I think they should still have a smoking area. I mean you got guys from World War I, World War II where this is all they have known for 40 or 50 years. To kind of take that right away, it's kind of a shame."

Jorg Dreusicke, a 72-year-old former smoker from New Hampshire who recruits members for the Veterans of Foreign Wars nationwide, called the move government overreach. He started smoking at the age of 10 and quit three years ago.

"It's big brother telling people how to live," he said. "Some people don't mind because it doesn't affect them. But for those it effects, they are pissed."

He predicted that after a "period of revolt" and much complaining, veterans would eventually return to medical centers.

Others are welcoming the ban, saying it is long overdue.

Tony Botticello, a 76-year-old Coast Guard veteran whose lung cancer is in remission, said he would often pass by smokers in parking lot on the way to his treatment at the Manchester VA. He smoked for over 50 years but quit smoking five years ago.

"It's personal for me," he said. "Maybe this will make somebody think about the ramifications of smoking and how some people find smoking offensive."