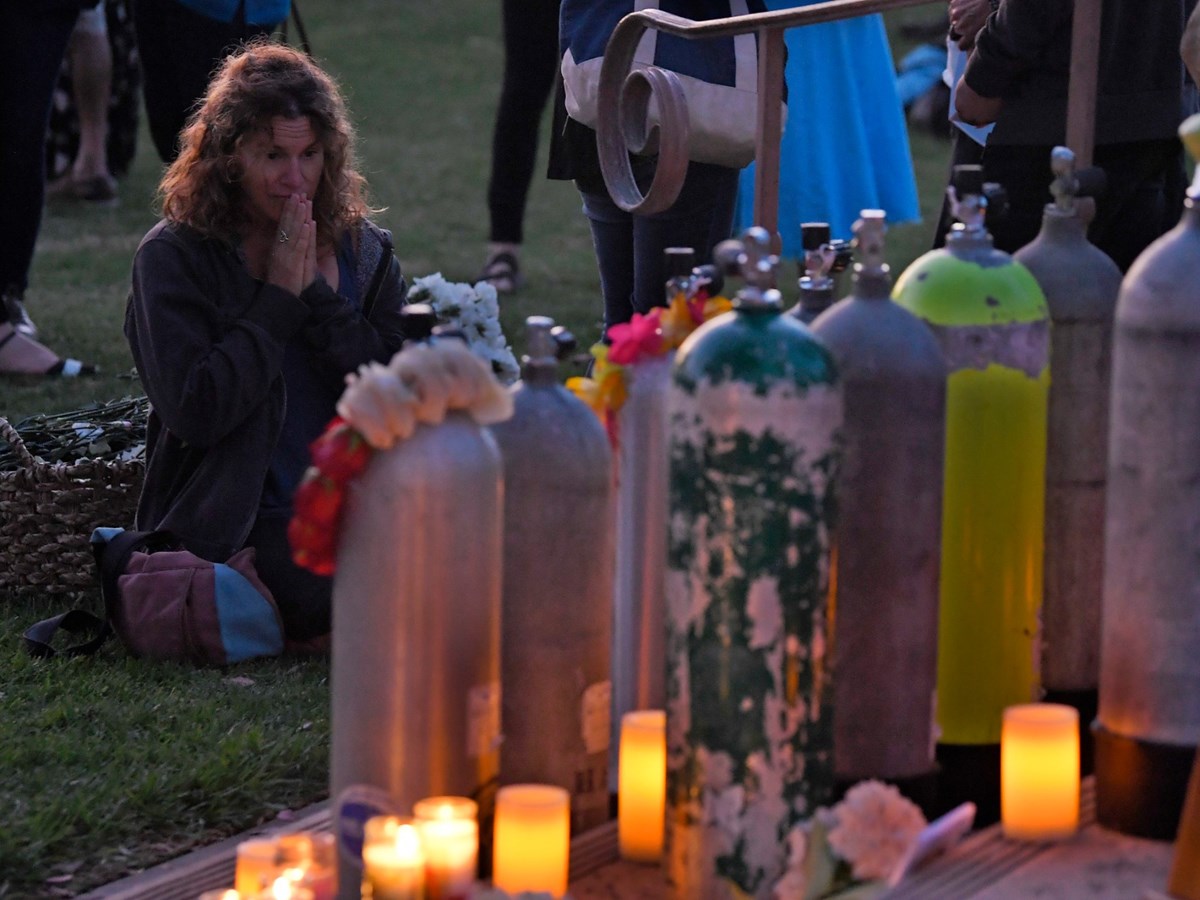 An attendee kneels in front of scuba tanks that were placed to represent each victim during a vigil Friday, Sept. 6, 2019, in Santa Barbara, Calif., for the people who died aboard the dive boat Conception.

(AP) — The 34 people who died in a diving boat fire off Southern California are being remembered by those who shared their love of the sea.

Hundreds turned out Friday evening for a vigil at a Santa Barbara park.

The dead were "our friends and our family members. Our common love of diving binds us together for eternity," said Don Barthelmess, a local dive instructor.

The victims included a family of five from Stockton and a couple from Sacramento.

Mourners wept, embraced and placed white carnations in baskets. The flowers and a wreath were destined for an existing waterside memorial to those lost at sea. 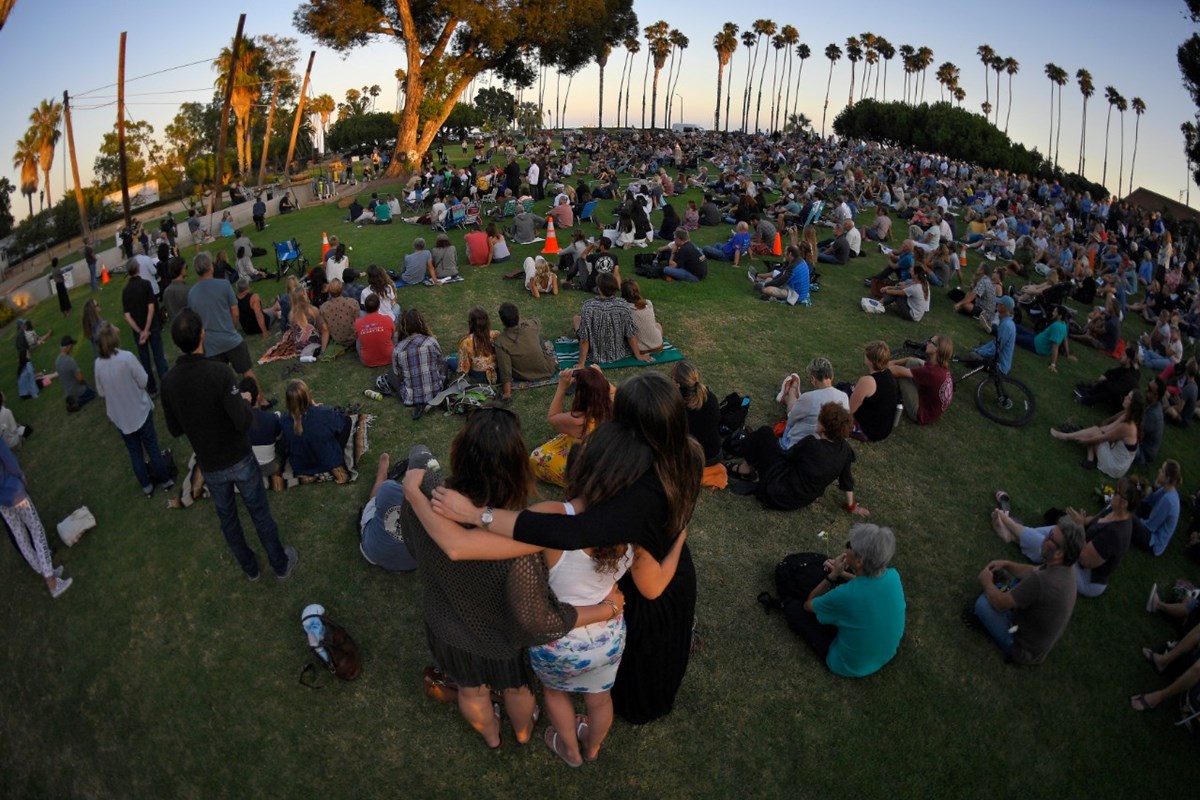 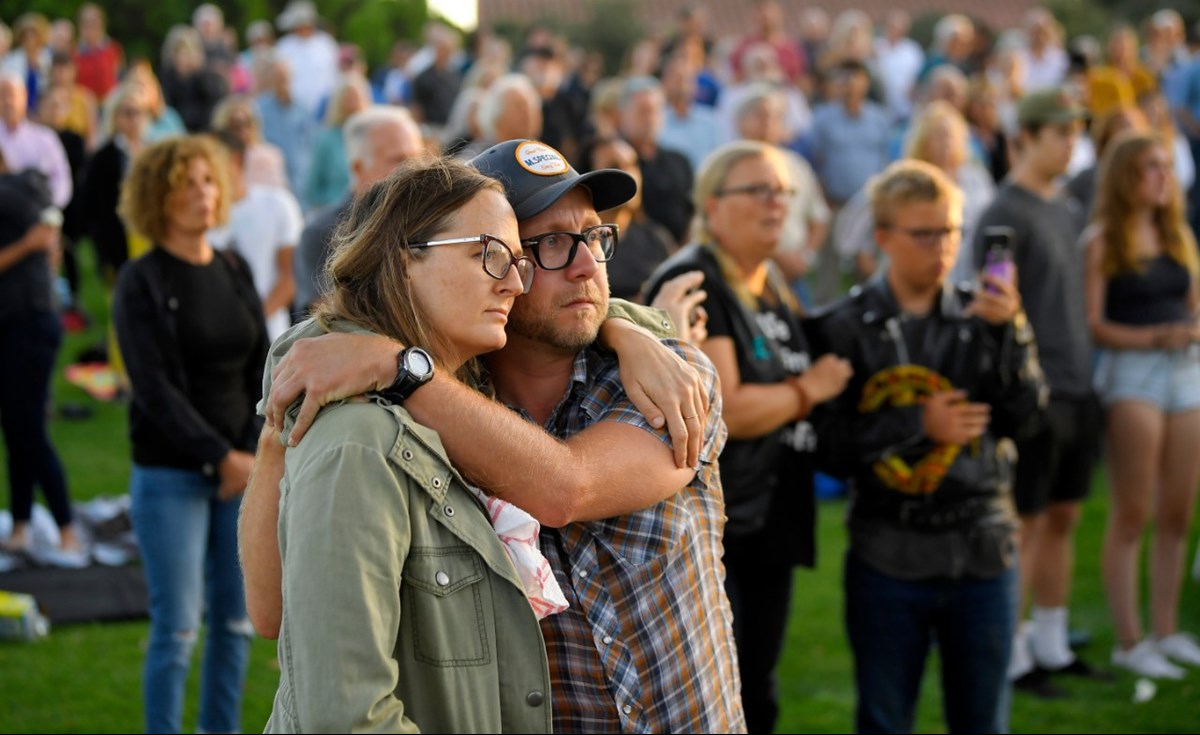 Attendees hug during a vigil Friday, Sept. 6, 2019, in Santa Barbara, Calif., for the victims who died aboard the dive boat Conception.Mark J. Terrill / AP Photo

The dive boat Conception was gutted by fire and went down in about 65 feet of water before dawn Monday while anchored off Santa Cruz Island.

Those who died were in a bunkroom below deck and probably were trapped as flames blocked a stairway and an escape hatch, authorities have said.

Preliminary findings on the causes of death, announced by Santa Barbara County Sheriff Bill Brown, raise the possibility the victims inhaled highly toxic smoke and died in their sleep before being scorched by flames that burned their bodies beyond recognition.

"The indicators are from the preliminary examination of the bodies that the victims died prior to being burned," Brown said.

The revelation came as investigators searched for the cause of the deadly blaze and divers looked for the body of the one missing victim. The Coast Guard said safety concerns over gusty winds halted efforts to salvage the boat Friday afternoon.

Gusts of up to 40 mph were expected through the weekend.

The Conception's captain and four other crew members jumped overboard and were the only survivors. They told investigators a harrowing tale of trying to get below decks to help the 33 guests and one crew member but finding themselves driven away by flames, heat and smoke.

"Within minutes, they would've been consumed," Glen Fritzler, co-owner of boat owner Truth Aquatics, Inc., told KEYT-TV in Santa Barbara. "So they did their best. They did re-enter the vessel from the back of the boat after they swam around it. They could not get to firefighting equipment because everything was engulfed." 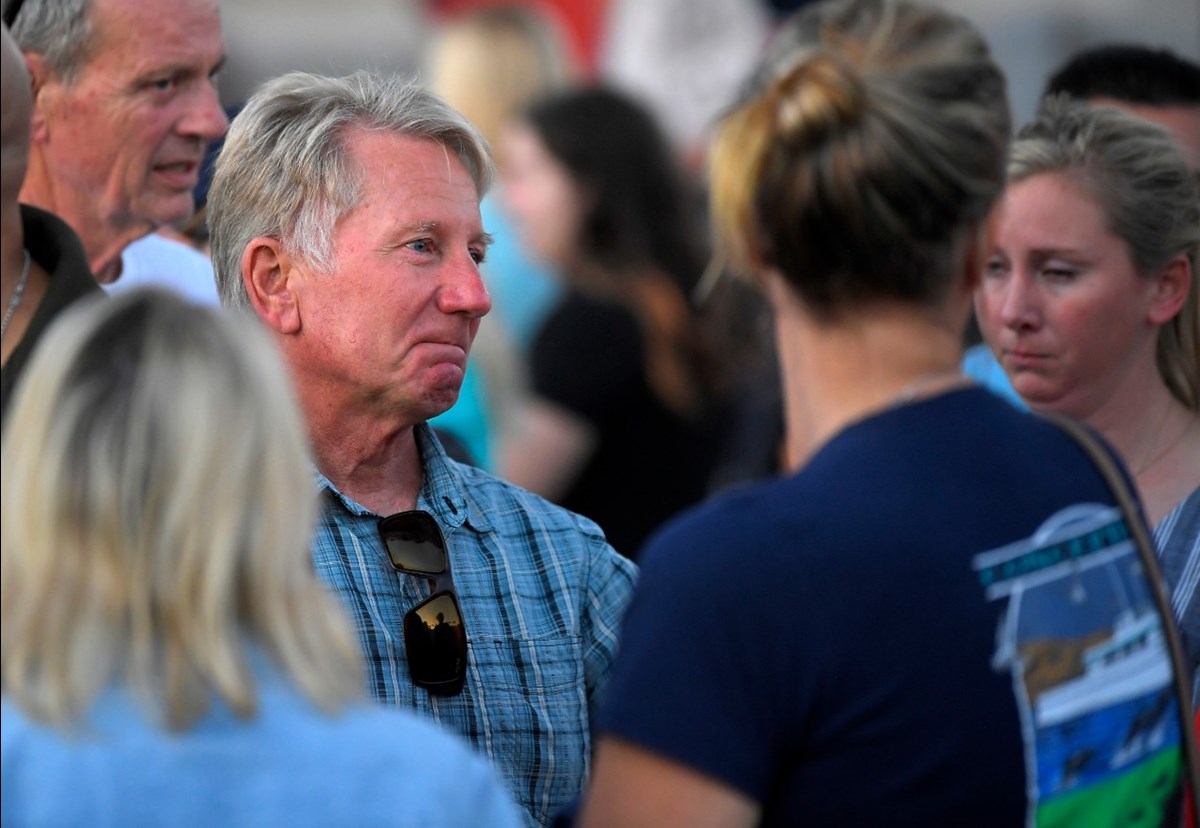 Twenty-three of the 33 bodies recovered have been positively identified through DNA, and their family members around the world are being notified, the county sheriff said. Relatives have been tracked down as far away as Singapore, Japan and India.

While local, state and federal agencies try to solve the mystery of what doomed the dive boat, the investigation has not turned criminal, although that is a possibility, Brown said.

Under a federal law known as the seaman's manslaughter statute, a captain or crew member can be charged with a crime if their negligence or misconduct results in death.

Laurie Levenson, a former federal prosecutor who is a professor at Loyola Law School in Los Angeles, said it's too early to discuss charges.

"There are lots questions to answer, including what even constitutes negligence. In other words, do you have to have somebody on watch, enough fire extinguishers or ways to, you know, get out — enough exits?" Levenson said. "Certainly, if they find out there was negligence or misconduct this is a possibility, but it's too soon."

Brown said the cause and manner of death were being determined through external exams and not traditional autopsies. Final results will depend on toxicology tests.

Dr. Howard Robin, an expert in forensic pathology, said lack of autopsies could present a challenge during any lawsuits brought by family members because those results are typically used to support damages for pain and suffering.

Truth Aquatics pre-emptively filed a lawsuit Thursday under a pre-Civil War provision of maritime law that could protect it from potentially costly payouts to families of the dead, a move condemned by some observers as disrespectful and callous.

The company said in a statement posted Friday on Instagram that the lawsuit is an "unfortunate side of these tragedies" and pinned the action on insurance companies and other so-called stakeholders.

"This wouldn't be something that we as a family would even consider," Truth Aquatics said. "The timing is on them. Our hearts and minds are on the tragedy and finding answers."