In the real estate firm where she works, Monica Rivera has a window office.

At 29, she has a great job, managing a team of agents. She has a degree from USC. The walls of her office are adorned with the awards she’s won and family photos.

In the center of one wall is a small, framed photo that stands out. It’s a faded black and white snapshot of a woman with dark hair, seated at a workbench, making something with her hands. Rivera calls her Abuela Nina – her grandmother.

“It’s actually from when she came to the United States and worked in a factory, and she’s making some kind of plastic mold,” said Rivera. “One of my favorite pictures.”

The photo was taken about 50 years ago, not long after Rivera’s grandparents set out from the Mexican state of Jalisco in the mid-1960s for Southern California. They found work in a metal foundry that made aircraft parts. At first, their plan was to save up and take their earnings back to Mexico. But after about five years here, they decided to stay.

That’s when Abuela Nina had a radical idea: Why not buy property? Doing so was a decision that would change the family’s trajectory.

Fast-forward a few decades, and Monica’s family is successful: Her father owns a business. Her mother works for Los Angeles County. Both have profited from real estate investments. And Monica is the first in the family to earn a college degree.

Within two generations, the Rivera family has gone from the factory floor to solid middle class. It took lots of hard work and smart financial investments. But their story is rapidly becoming that of a growing number of Latinos in California and throughout the country.

More Latinos are becoming affluent: Beacon Economics reported three years ago that in 2014, more than a quarter of Los Angeles County’s Latino households were bringing in between $100,000 to $200,000 a year, compared with 16 percent in 2000.

“We’ve seen rates of Latino business ownership increase exponentially,” Vallejo said. “The Latino education gap is closing, although it's still large, more and more Latinos are entering college than ever before. High school graduation rates have increased significantly. And so there is real progress being made. 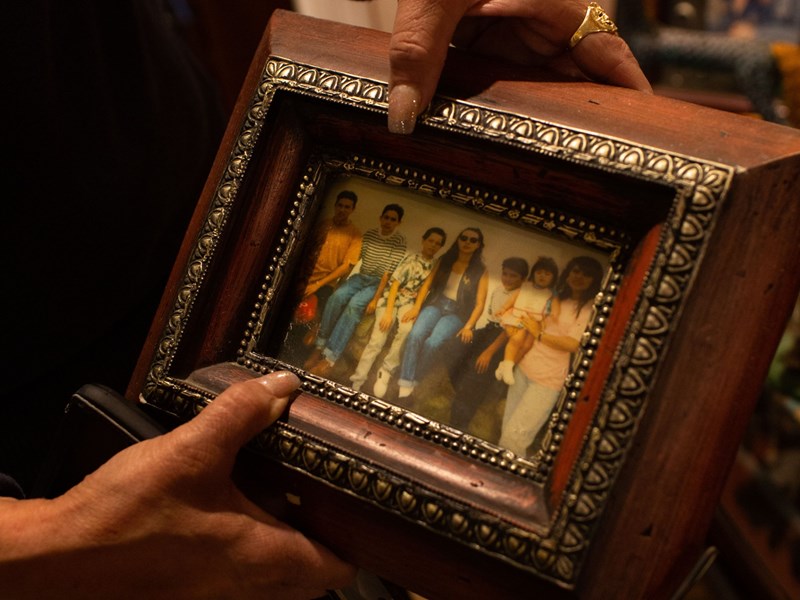 Helen Rivera showing a photo of her with her children in the 1990s. Photographed at their home on May 26, 2019 in Chino, California.James Bernal / KPCC

Vallejo added, “It absolutely contrasts with the myths and the rhetoric that is out there.”

All that said, many Latino families in California are still struggling. In spite of the gains, Latinos are overrepresented among poor Americans, with 17 percent of California’s Latino population living below the federal poverty line, according to census data.

And with ever-higher housing and other costs, some of the very opportunities that gave previous generations a leg up toward the middle class in California are becoming ever more elusive.

From Have-Not to Have

One recent morning, Rivera joined her parents for breakfast in their spacious home in Chino, a suburb about 30 miles east of Los Angeles.

Juan and Helen Rivera designed and built their modern three-bedroom, Spanish-style home a few years ago. It sits on a two-acre equestrian property – the couple loves horses, and they own several of them. Out back are stables and a riding arena, on grounds lush with purple jacaranda. A convertible Mercedes sits in the driveway.

It’s the couple’s second horse property. Before this they lived in a five-bedroom home with stables in La Mirada. Helen, an administrator with the L.A. County Health Department, recounted the neighborhood gossip when they moved in.

“People, neighbors, just assumed that we were drug lords,” she said, half-laughing. “There was a rumor that came back to us, and I was, like, what? 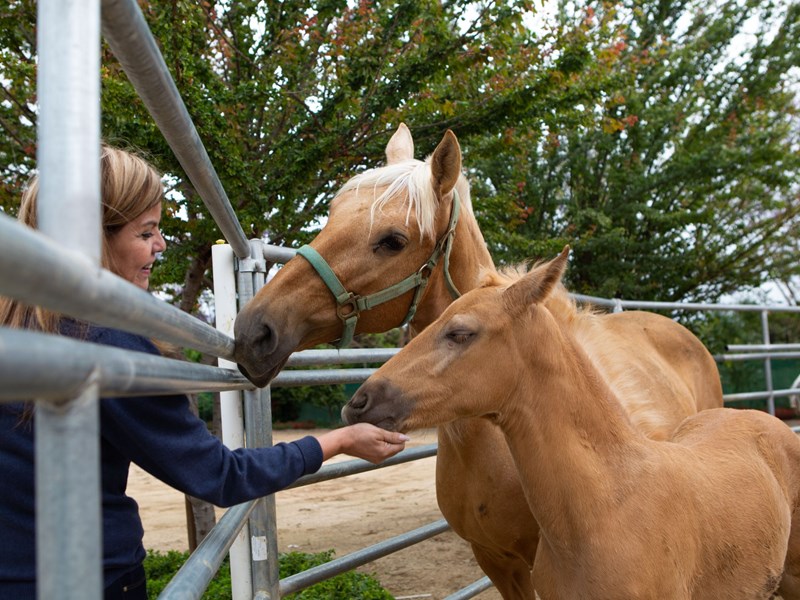 Helen Rivera feeds loquats to a few of her horses on her property. Photographed on May 26, 2019 in Chino, California.James Bernal / KPCC

Neighbors have assumed other things, as well. One neighbor saw Juan working on his new home and thought he was part of the construction crew, asking him where the owner was. Juan simply took off his hat and said “Hi, I’m Juan.”

“It’s just an assumption that people will make against us, you know,” Helen said, “that we can’t have anything.”

But they do, and they worked for it — as did their parents.

Juan was in his teens when his parents bought that first home in 1971, a triplex in the working-class community of South Gate. They’d been saving and saving, he said, never so much as going out to eat. But his parents didn’t even have legal status then, and they earned little.

“When I think about it, I don’t know how they made it, because they were making minimum wage and the down payment was $3,000,” Juan said.

But they made it. Pooling their resources, the family bought the units. Juan, his parents and three siblings crammed into the front house, a small two-bedroom.

“My mom and my dad slept in one bedroom, then my sisters slept in the other one, and we slept in the living room, the boys,” Juan said.

The other units were rented out – and with that, the family began modestly building wealth.

Juan, who by then was working as a welder, had pitched in some of his savings for his parents’ purchase. When he was ready to buy his first home as a young man, they helped out.

Not long after, he was temporarily laid off.

“So then,” Juan said, “I went selling oranges on the street.”

And he kept making those mortgage payments and building equity, until he got his job back.

Helen didn’t have it much easier. She grew up Mexican American, the daughter of U.S. citizens, a short distance east of downtown Los Angeles in East L.A. Her father had a union job at a company that made garbage disposals. Things were stable until she was around seven, when her mother became disabled in a devastating car accident.

Bills piled up. Then, her dad’s union went on strike. At one point, money got so tight that the family resorted to scrounging for food.

“My dad would wake me up early in the morning, and we’d take the bus to the big central market where they have all these trucks, and we would have shopping bags,” Helen remembers. “As a little girl, it was easier for me to go under the trucks and pick up the potatoes that fell under the truck. And then I would come back and get ready for school.”

In time, the family got back on its feet. Helen’s dad began earning better pay and, over time, her parents bought a house.

“They knew being homeowners that you gain a certain level of respect being a homeowner,” Helen said, “and that was something my dad explained to me at a young age.” 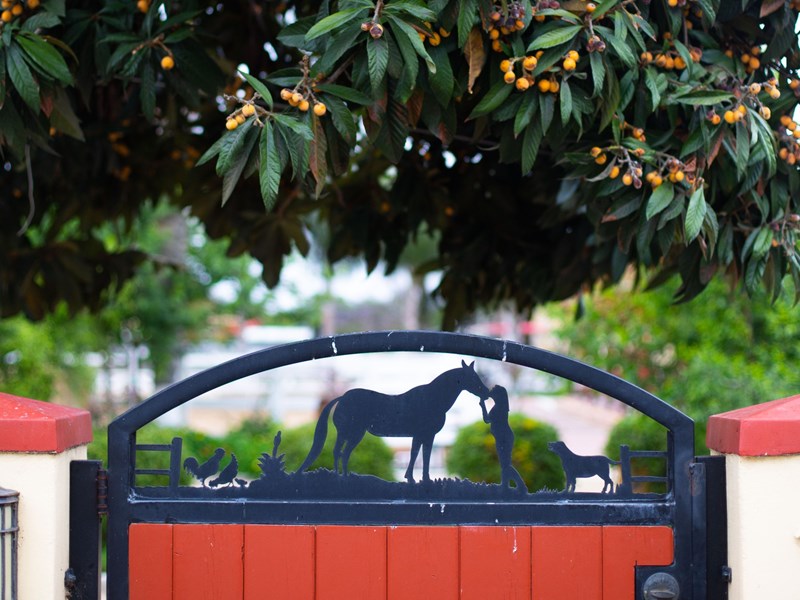 A gate cutout depicting Helen Rivera and one their horses under the shaed of a Loquat tree. Photographed at the Rivera home on May 26, 2019 in Chino, California.James Bernal for KPCC

While they absorbed these lessons from their parents, both of the Riveras struggled financially as younger adults. Both had children of their own before they met. Helen at one point worked three jobs, including waiting tables.

But they took what opportunities they could. Not long after they married in the mid-1980s, the welding-repair shop where Juan worked went up for sale. With his savings and a little help from relatives, Juan bought it. At first, just paying the bills was a stretch. But as the shop began turning a profit, the couple invested it in real estate.

“I read all kinds of books,” Juan said, “On doing foundation, everything to build a house. I also read principles of real estate, all this stuff to do real estate.”

They started with some apartments. They did a little flipping. As property values rose, they held off. Then, the housing bubble burst. Juan, who obtained a real estate license in 2007, started going to property auctions. Monica was a teenager then, and she would go along.

“I had just gotten my permit to start driving,” Monica said. “So he was basically teaching me how to drive, and we started going to auctions. And we’d literally be in the front of the line, with the bidding paddle and the auctioneer would be auctioning off the property, and he’d let me hold the paddle. And I’d get excited about that.” 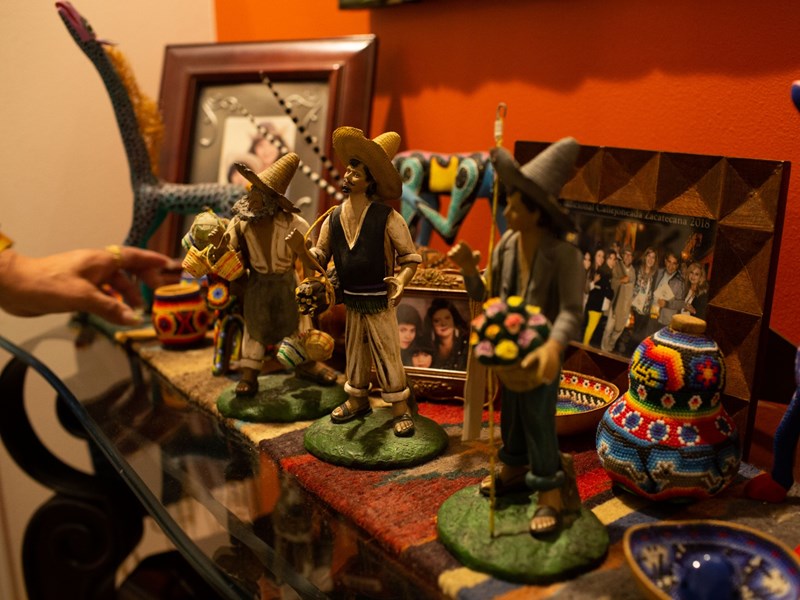 Helen is very proud of her Mexican heritage and displays many figurines of Meican workers around her home. Photographed at their house on May 26, 2019 in Chino, California.James Bernal / KPCC

The properties they bought, sold and refinanced helped put Monica through college. She graduated from USC in 2012 with zero student loans.

“I believe that the American dream is to come to a place where you open up new opportunities not just for yourself, but for your family,” Monica said. “Had it not been for the road that was paved by my parents, by my grandmother, by all of our family that came before, I would never have gotten the opportunity to go to college.”

Today, Monica has her successful career with Keller Williams Realty in Downey, a city that in recent decades has become a magnet for middle-class Latinos and Latino-owned businesses. She and her team work closely with Latino families, including first-time homebuyers.

While buying has become increasingly difficult these days, when a family succeeds in closing on their first home, she said, it often makes her think of Abuela Nina, who died a couple of years ago.

As Monica sees it, her hard-working family would have made it eventually. But she credits Abuela Nina’s ambitious desire to put down roots as the catalyst that helped push them forward.

“She said something that really stuck with me,” Monica said. “’Hay que sembrar para cosechar.’ You have to plant the seeds in order to reap the harvest.”

A harvest that families like her grandmother’s hope they can reap someday, too. 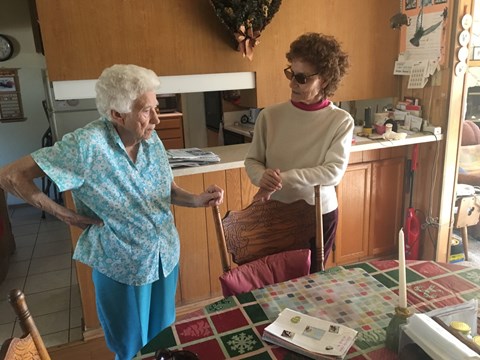 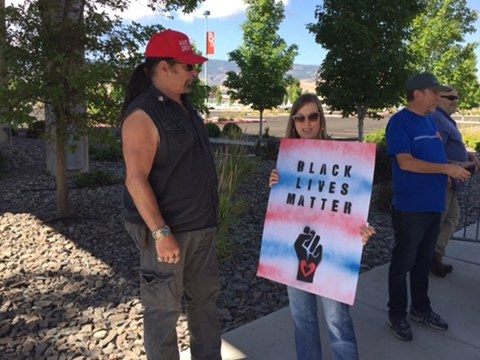