Mayor Darrell Steinberg and the Sacramento City Council have called on the City Office of Public Safety Accountability to investigate the arrest of protesters at a Stephon Clark march Monday.

Late Monday night, Sacramento police officers detained and arrested 84 people at a protest in East Sacramento, including clergy and two journalists. The demonstrators were marching through the neighborhood to protest Sacramento County District Attorney Anne Marie Schubert’s decision not to charge the officers who shot and killed Clark last year.

A statement from the mayor’s office said that the investigation would be conducted by the Office of Public Safety Accountability independent from the police department and city manager’s office.

Steinberg said that the police department would be conducting its own inquiry, but that the city wanted to conduct an independent inquiry to ensure that the public knows exactly what happened.

The mayor asked that the investigation look into why and how the order for protesters to disperse was given, whether or not people were able to leave once orders to disperse were given and what the distinction between the public and the press is during protests.

“There’s a list of seven things the mayor came up with, with the advice as well of the council members. That list was comprised of a lot of the concerns of the people who had boots on the ground there,” said Tournour.

Tournour will have to identify what led up to one of the largest arrests at a protest in the city's history, including a review of whether officers herded people in one direction in order to pen them in for arrest.

Officers say a large group of people did not disperse after the final order to break up their unlawful assembly was given at around 10 p.m. Monday, but instead headed down 51st Street and were headed off.

According to Police Chief Daniel Hahn several vehicles were keyed, but he had not acquired enough information to give an opinion as to the methods used to break up the protest. He was asked about the contact between he and the mayor.

“This one is unusual in that numerous people were arrested including media personnel, and so that does make it much different than we’ve had in the past. Hahn said. "So I think the mayor was well within his authority and right to be asking questions and wondering why this was different."

The department and Tournour's office will also review the reasons why three journalists were detained and two were arrested.

The mayor did not address the issue during the council meeting, but Councilman Eric Guerra did after.

“I was pretty shocked at the number. I’ve never seen like that," he said. "I’ve engaged in many protests and some unpermitted ones,” he said, “I think the more important thing is: We’re the capital city. Protests are going to happen. Rallies are going to happen. We got to figure out how to make this work." 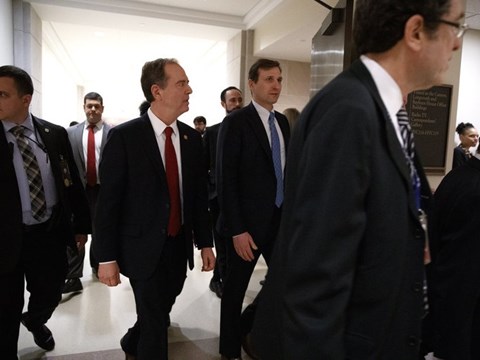