(AP) — A 22-year-old Davis officer killed weeks into the job was a dedicated daughter and sister who represented the best of the police community, family and fellow officers said Friday at a packed memorial service.

Loved ones and officers from across the country packed about 8,000 seats at an indoor arena at the University of California, Davis, to pay tribute to Natalie Corona, who had dreamed from a young age of going into law enforcement like her father.

"It was truly in her blood," Davis Police Chief Darren Pytel said. "I placed a bet that one day she'd be the police chief. I know what it takes, and she had it."

He apologized to her parents, Merced and Lupe Corona, for the shooting death of their daughter last week as she responded to a car crash.

"You delivered to us the perfect cop. Our commitment to you was to get her home," he said. "I'm so sorry that we didn't get her back home to you."

Corona's slaying has shocked Davis, which prides itself as a safe, family-friendly community anchored by one of the state's top universities. The last time a police officer died in the line of duty in Davis was in 1959.

Officers lined walkways on the campus and saluted as family members followed Corona's casket into the 90-minute service. Uniformed officers took their seats, holding their hats, as a slideshow on giant screens displayed family pictures and Corona's brief professional life.

Musician Billy Ray Cyrus sang a song he wrote for soldiers of the Vietnam War and said Corona's smile touched his heart.

"She's a light in this world that won't be forgotten," he said.

Family, colleagues and others who knew Corona have recalled her vibrant smile, compassion, dedication and lifelong dream of joining law enforcement in the footsteps of her father, who spent 26 years as a Colusa County sheriff's deputy.

Merced Corona said he tried to get his daughter "Nat" to join the county force, but she told him that she had "found the perfect department in the perfect city" and couldn't picture herself anywhere else.

"Today we lay to rest our beloved sister cop," he said.

A rising star in the Davis department, Corona graduated from the Sacramento Police Academy in July and had completed her field training in December. She was assigned to patrol on her own just weeks ago.

On the evening of Jan. 10, there was no apparent danger when Corona responded solo to a three-car crash in downtown Davis, near the university campus. But as Corona talked to the drivers, gunfire erupted.

Police say gunman Kevin Douglas Limbaugh, 48, was not involved in the crash but rode up on a bicycle and opened fire on Corona without warning. He hit her in the neck and fired more shots as she lay on the ground, reloading at least twice as he fired at passing vehicles, narrowly avoiding wounding others before he casually walked home.

Police are still investigating the motive and say Limbaugh did not appear to know Corona or specifically target her. It is also not yet clear if Limbaugh had planned the attack or acted spontaneously, Davis police Lt. Paul Doroshov said.

Limbaugh dropped a backpack that led officers to identify him and trace him to his house, where he had a brief standoff with police, went back inside and killed himself, the Davis police chief said.

Police found two unregistered semiautomatic handguns at the house and a handwritten note on the bed that claimed police had been bombarding him for years with ultrasonic waves and he "can't live this way anymore."

Limbaugh was charged and convicted in a battery case last fall after assaulting a colleague at a casino where he worked. He was ordered then to surrender a semiautomatic rifle he owned. It is not clear how he obtained the two handguns.

After the memorial service, a funeral procession traveled from Davis to the town of Arbuckle about 40 miles north, where the Corona family lives. 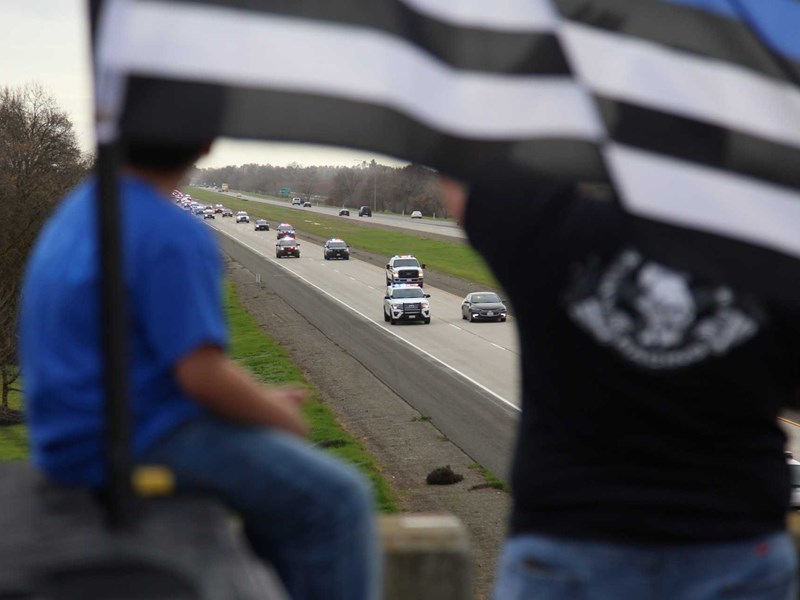 Davis firefighter Frank Schlosser of the West Plainfield Fire Department came out to a highway overpass in Woodland where the procession was to pass by to honor Corona and the "brotherhood" between firefighters and police officers.

“It’s unbelievably devastating to hear that this happens anywhere in other parts of the country and then to have it in Davis, which is — you think it’s the smallest, safest little town on the West Coast and it just brings it home that violence and mental health can be issues for everybody anywhere,” he said.

The slain officer is survived by her mother, her father and three younger sisters.