After a night of raucous Stephon Clark protests, demonstrators returned to downtown Sacramento for a second day of outrage.

Today’s demonstration comes after a night of rowdy unrest, where protesters shut down a community forum to discuss the shooting at City Hall, and also blocked thousands of fans from a Kings game for the second time in a week. 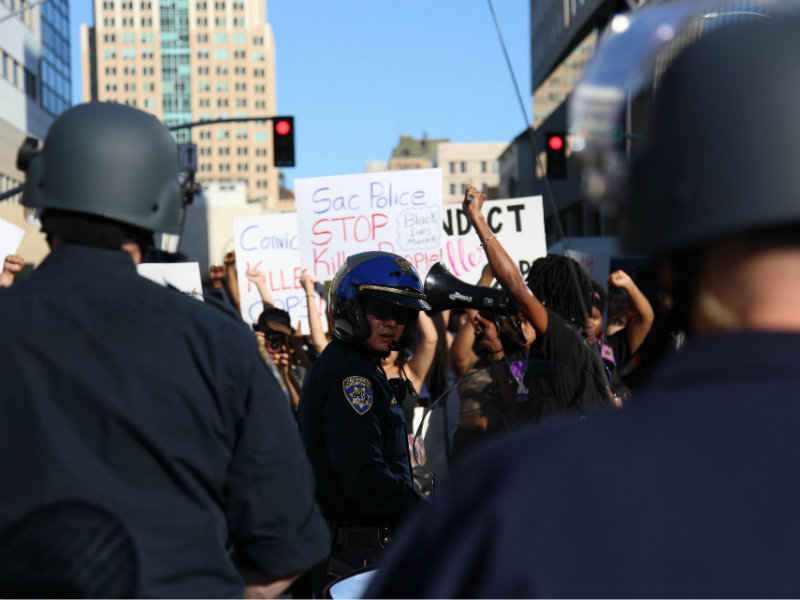 In a conversation with Capital Public Radio, Mayor Darrell Steinberg talked about the balance of allowing the protests but also keeping order. “I did not want mass arrests,” he said of the disruptions on Tuesday night.

He said he worried that detaining or arresting protesters “would have risked a full-scale riot."

The Sacramento Police Department said on Wednesday it is working with the Kings so that fans can safely attend Thursday night’s scheduled game.

On Wednesday afternoon, family, friends and community members trickled in and out of a South Sacramento church at a wake for Clark.

Clark’s aunt Shernita Crosby said not every member of the family agreed with the disruptions at Tuesday’s community forum.

Clark’s brother Ste’vante Clark had climbed jumped atop the dais and stood on a lectern in council chambers and shouted profanity.

“We didn't like Ste’vante coming in and being disruptive like that,” Crosby said. “We need to be able to talk to the mayor so we can tell him our concerns.”

Also among those attending at Bayside of South Sacramento church was Cynthia Brown, who works at the Golden 1 Center and was on the clock during the two games when protesters blocked thousands of fans from entering the arena.

"I'm OK with what the protesters did, only because — it's time,” she said. “Everybody that's been comfortable needs to be uncomfortable, because we as African-Americans have been uncomfortable for a long time."

Brown says she doesn't know Clark's family and has no connections to community or activist groups. But with two sons and three grandsons, she felt compelled to speak out.

Clark’s funeral is set for Thursday morning, and Rev. Al Sharpton is scheduled to deliver the eulogy.