Raley Field was packed Wednesday for a preseason game between the San Francisco Giants and its AAA affiliate — the Sacramento River Cats.

For the fans of Giants and the River Cats, the game was as close to perfect as you could get because it didn't matter who won.

Nick Meidinger and his dad drove from Sebastopol to tailgate five hours before the first pitch. Meidinger was wearing a Giants hat. It was signed 24 years ago by a one-time Giants first baseman at spring training in Arizona.

"I saw Jack Clark sitting there and I got his autograph," he says.

When asked about the red ink that has turned to a light pink, Meidinger says he should probably keep the hat out of the sun.

Meidinger says he's excited by the skills of River Cats outfielder Gorkys Hernandez, who is from Venezuela. 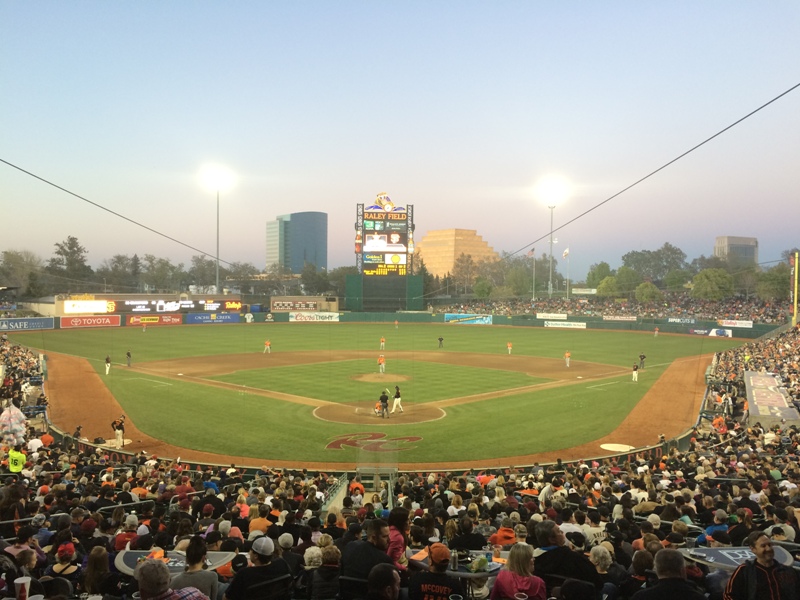 Hernandez says he is happy to be in Sacramento for his first season as a River Cat. But, he's not hoping to stay.

"Do the best I can here and to play for when I have a chance to get to San Francisco," he says.

For some of the Giants, spring training has been routine.  For others, it's been a chance to return to form. Pitcher Matt Cain is a three-time All-Star who's been sidelined for much of the past two seasons with arm injuries and surgeries.

Cain pitched three games for the River Cats last year.  He says he is happy to be wearing a Giants uniform and is happy to see the fans again in Sacramento.

He says he's also happy to leave Arizona where spring-training fly balls have a tendency to turn into home runs.

"It's always nice to be able to play the Bay Bridge series and get out of the Arizona desert and get into some more realistic playing situations you know where the balls just not flying out in the thin air," he says. "A little bit cooler weather's always good to get into."

The Giants will play three games against the Oakland Athletics before opening the season Sunday in Milwaukee.

The River Cats start their season next Thursday in Salt Lake City.

6 Things To Watch In The Nevada Caucuses