Reno Police have not yet identified the man who took a shot gun into a Reno hospital on Tuesday, shot two physicians, a patient and then killed himself. The gunman won’t be identified until next of kin have been notified. Until that happens Reno’s medical community is dealing with its loss.

Urologist, Dr. Garo Gholdoian was working on the third floor of a building on the campus of the renown Regional Medical Center when a man with a shot gun walked in, shot, and killed him. At a news conference this morning, Renown Emergency Room Physician, Dr. Michael Morkin remembered Gholdoian and an unidentified physician who is in critical condition.

“Two of the physicians involved yesterday are both friends of mine, exceptional physicians the kind of doctor I wish I could be," Morkin said. "It is a very difficult time for the medical community, the physician who passed away in fact cant be replaced and the physician with critical injuries is going to face a road.”

Since the shooting happened on the third floor, police believe it was not a random event, but they haven’t established a connection between the gunman and the Urology office that he apparently targeted. 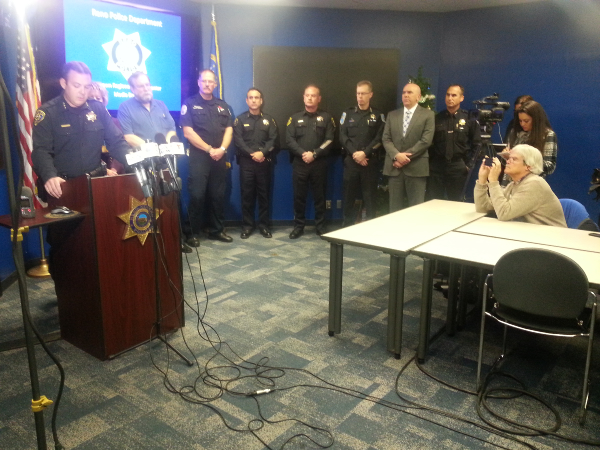 (AP) -- Reno police have identified a doctor killed and one of the two women wounded in the hospital shooting Tuesday.

Authorities previously had reported a doctor being wounded in the attack.

Police said at a news conference Wednesday that Dr. Charles G. Gholdoian was killed and Shawntae Spears was wounded when a suicidal gunman entered the largest hospital in northern Nevada and began shooting Tuesday afternoon.

The names of the gunman and the other wounded woman were withheld.

The shooter killed himself in the attack.

Robinson said there were about 100 people in the Center for Advanced Medicine at Renown Regional Medical Center when the shooting happened.

It doesn't appear to have been a random shooting, but investigators have more questions than answers about what led to the attack at the Renown Regional Medical Center.

Police have scheduled a 10 a.m. briefing Wednesday to provide an update on the investigation.

A suicidal gunman killed one person and wounded two others - including a doctor - who were rushed across the campus to emergency surgery after the intruder killed himself.

Police didn't release any names of the wounded or dead.

“There was a lot of excitement,” said Olga Monroy, a employee. “A lot of people running around, not knowing what was going on.”

Police said they received a call about an active shooter at 2:05 p.m. Tuesday on the third floor of the Center for Advanced medicine. A SWAT unit, bomb squad and nearly 100 officers responded to the scene.

Most offices open this morning in building where deadly shooting took place http://t.co/HdowrvZHFi