The flows were at 5500 cubic-feet-per-second last week and will be one-third of that on Friday.

But, the reduction won't affect the salmon near the reservoir according to the Department of Water Resources.  Kevin Wright with the department says 1,000 cubic feet per second of water will continue to be sent down the fish ladder. That is more than normal.
"Normally we only have 600 cubic feet per second in that low flow channel where the fish breed," says Wright.  "Because of Thermalito Power Plant being out of service, we had the flows in the low flow channel up and we decided to leave them there." 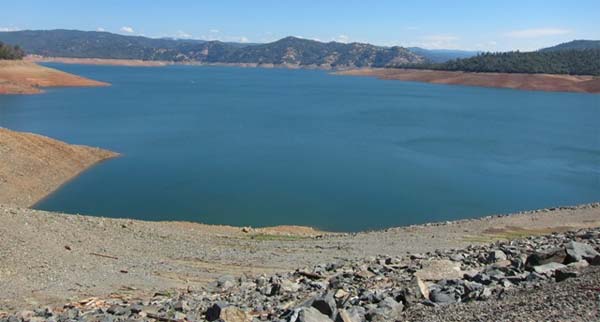 The power plant had a fire last year. Wright says even as it conserves water, the department must release enough to keep the Feather River at a temperature conducive to successful salmon runs.
"We have a temperature schedule. And between September 1st to September 30th the fish hatchery water temperature requirements are 48-to-56 degrees," he says.  "Currently our temperature is just under 50 degrees."
There are two outlets for the lake -one through the dam and one down the fish ladder.  Flow through the dam will be 750 cubic feet per second.  Wright says the department will monitor river temperatures to ensure the water is cold enough for spawning salmon. Fishermen worry the temperature farther downstream will warm to the point the salmon won't continue moving upstream to spawn.
The overall reduction of water released from the reservoir is in response to two consecutive years of below-average rainfall.
The department says there is an adequate supply of water in the lake.  Lake Oroville is the primary source for the California State Water Project.