One of the proposals would add walking and biking access along Interstate 5.  A second rebuilds the Highway 160 crossing and would add biking and walking paths.  The third would build a new bridge connecting Sequoia Pacific Boulevard to Truxel Road.   The city’s Public Works Department says any project will require significant state and federal contributions.

“The difference being that Regional Transit has already started analyzing the Truxel bridge," says Sparky Harris with the City.  "This is something that we can kind of piggyback on their efforts and hopefully move forward in a coordinated way.  Whereas both the I-5 and the 160 are new concepts”

Estimated costs for the projects are $15 million for the I-5 expansion, $54 million for the new Truxel bridge and $188 million for the Highway 160 crossing and the raising of Northgate Boulevard.  The City Council is expected on Thursday to approve further talks on the projects.
These are the eight alternatives from which the city chose three -identified as options number 2,3, and 8.  To see the entire city report, click here. 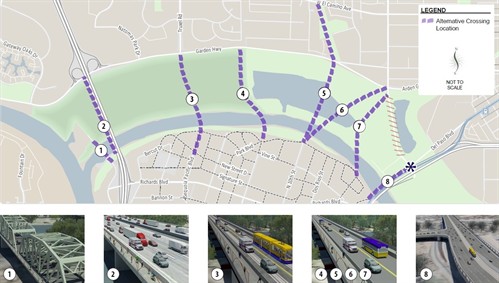