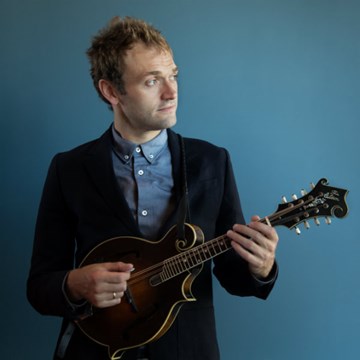 Mandolinist Chris Thile is among the most highly acclaimed musicians of his generation.

Chris made his first Prairie Home Companion appearance in 1996. That broadcast showcased remarkable young artists. Chris, then 15, clearly fit the bill. Since that early APHC booking, Chris, recipient of a 2012 MacArthur "genius" grant, has certainly made his mark - and not only in bluegrass music. His mandolin concerto, Ad astra per alas porci, had its official premiere in 2009 with the Colorado Symphony Orchestra. He has collaborated with a who's who of musicians. His album Bass & Mandolin (Nonesuch) with Edgar Meyer won a Grammy, as did The Goat Rodeo Sessions (Sony Masterworks), when he joined forces with Meyer, Stuart Duncan, and Yo-Yo Ma. And his Bach: Sonatas and Partitas, Vol. 1 - music originally composed for violin - was released by Nonesuch Records in 2013.