A Book Of Sound: Celebrating The 75th Anniversary Of "Grapes Of Wrath" 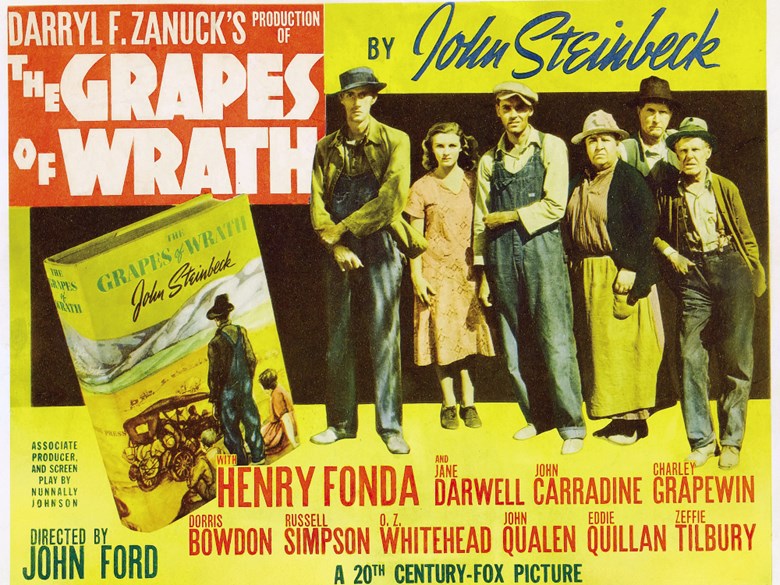 Every place has its own music, a unique sound and rhythm unique to the location. It becomes a part of you. When you go to a new place, the sounds just don’t measure up. When you return home, the familiar music of voices, nature and machines welcomes you home.

“The Grapes of Wrath” is a book of sound. It includes farm equipment, rain and running rivers. It encompasses classical, jazz, gospel, big band and folk music. The story of the music is as fascinating as the story of the exodus from the Dust Bowl to California.

In the 75 years since John Steinbeck published “The Grapes of Wrath,” the sounds of Oklahoma and California have changed. Fewer and fewer people remember the Great Depression. Some music of that era was recorded as part of the Works Progress Administration, but the quality is poor, limited by the audio equipment of the time. The wax discs and analog tape are archaic by today’s standards. In the 1930s, “digital” meant you were using your fingers and toes.

Author Ralph Ellison grew up in Oklahoma. In the Depression, his work took him to New York City. Even from that city, known for its unique pulse and rhythm, he reflected on the combined sounds that made up the music of his youth:

It seems a long way and a long time from the glorious days of Oklahoma jazz dances, the jam sessions at Halley Richardson’s place on Deep Second, from the phonographs shouting the blues in the back alleys I knew as a delivery boy, and from the days when watermelon men with voices like mellow bugles shouted their wares in time with the rhythm of their horses’ hoofs, and farther still from the washerwomen singing slave songs as they stirred sooty tubs in sunny yards; and a long time, too, from those intense, conflicting days when the school music program of Oklahoma City was tuning our earthy young ears to classical accents, with music appreciation classes and free music instruments and basic instruction for any child who cared to learn, and uniforms for all who made the band. (“Living with Music” essay, 1955)

Ellison was about the same age as Tom Joad, the fictitious hero of Steinbeck’s “The Grapes of Wrath,” but they would have experienced different music.

Tom Joad was the last of four generations to grow up on the family farm, with a lifestyle far removed from Ellison’s big city environment. The Joads’ closest town of Sallisaw was a fraction of the size of Oklahoma City. There may have been jazz clubs in Sallisaw, and Tom might have known where to find them, but did the racial traditions of the day prevent him from entering? If he went in, would he have told Ma about it? If the Joad children attended school, would they have access to a band? The activities Ellison remembered would have been fantasies for farm folk like the Joads, even in the good times before the Great Depression.

Sallisaw has one radio station now; in the 30s, most broadcast signals probably came with a lot of static from McAlester or other towns in Oklahoma and Arkansas. Electricity to power a table-top or floor-model radio did not extend to rural homes. In Sallisaw, radio listeners might have gathered around a primitive radio speaker in a store or other public place. In those days, radio stations limited their broadcasts to what were considered family times, mostly in the evenings, not necessarily on a schedule that would have coincided with the Joads’ excursions to town.

If they had access to a radio in 1935, the Joad family would have heard big bands and movie music. The top songs of the year included “Cheek to Cheek” (Fred Astaire, from the film “Top Hat”) and “On The Good Ship Lollipop” (Shirley Temple, from the film “Bright Eyes”).

Another song on the charts in 1935 reflected the values of the Joads. The Carter Family had a hit with a revised version of an old hymn called “Will the Circle Be Unbroken?” The song shares a sentiment Steinbeck expressed through the words of Ma Joad: In the end, the family should stay together. Generations of families lived in the same house, worked together and, like the Joads, went West together. Although the concept of multi-generational living disintegrated after World War II, it was still strong and highly respected in 1935.

Like much of the traditional music of that time, “Circle” is dumped into the broad category of bluegrass. That single heading does not do justice to the rich roots of American music. Settlers brought their folk and religious music, and their instruments, from Europe. As the U.S. developed, the music took on its own flavor and variations. The term “bluegrass” is derived from a region in Kentucky, but the same songs took on a different “accent” depending on the region of the U.S. where they were played. The differences are as distinctive as those between rock music’s Punk and Glam styles.

Oklahoma, by virtue of its geography, has long been a crossroad of music traditions. Music considered “native” by the state’s historical society and the Smithsonian Institution’s Folkways, includes Southern variations on traditional songs as well as gospel music adopted by former slaves. Cowboy and Native American sounds are also evident. The music that came out of Oklahoma is just a part of what landed in California. The people who moved West during the mid-1930s were uniformly labeled “Okies” but, in fact, they came from all over the U.S. Those musical “accents” came together in the Hoovervilles of California’s Central Valley.

Steinbeck gave us a taste of the music we might have heard in the work camps. He wrote about the musicians who played “Ten-Cent Cotton and Forty-Cent Meat,” “Why Do You Cut Your Hair, Girls?” “McAlester Blues” and “Jesus Calls Me to His Side.” He identified “I’m Leaving Old Texas” as an “eerie song that was sung before the Spaniards came, only the words were Indian then.”

The 1940 film version of “The Grapes of Wrath” delivered a different set of songs, including “A Tisket, A Tasket,” “Going Down the Road Feeling Bad” and “She’ll be Coming ‘Round the Mountain.” Henry Fonda sang “Red River Valley” in the film and, although the Red River establishes the border between Oklahoma and Texas, the song comes from the northern part of the Mississippi tributary settled by French Canadian trappers.

The music most associated with “The Grapes of Wrath” came out of the labor movement. As poverty, starvation and unfair conditions became apparent, the stories were told through music. Although farm workers would not have dared declare dissatisfaction, there were musicians who were willing to represent their plight. Woody Guthrie led the charge, writing “The Ballad of Tom Joad” as one of an album of activist tunes (“Dust Bowl Ballads,” 1940) requested by his record company.

In 1938, as Steinbeck wrote “The Grapes of Wrath,” a much different type of music filled his writing room. He installed turntables and speakers in his home in Los Gatos, just as Ralph Ellison prized the latest technology in his New York flat. While Ellison had a library of jazz records to inspire his writing, Steinbeck listened to classical music. He wrote in his journal that he played Tchaikovsky’s “Swan Lake” as he wrote, because the story of the swan seemed to him to parallel the transformation of the Joad family (from “Working Days,” edited by Robert DeMott).

All these writers initially received a poor reception. Some critics called Guthrie, Pete Seeger and their peers Communists and banned their music, but eventually their songs gained popularity. Steinbeck and Tchaikovsky had something in common: “The Grapes of Wrath” and “Swan Lake” were both unpopular when first introduced, yet both were later recognized as breakthrough pieces for the writers.

Of all the music associated “The Grapes of Wrath,” the most striking comes not from a voice or an instrument. It is the music of life. You can hear it in the birds and in the food over a fire and in the hard rains that fell on the roof of the Joads’ railroad car home. There is also the music known heard by a driver headed to a new home in California:

It is the music of our collective memory, caught on the printed page, unique to that time and place.

Our Grapes Of Wrath Playlist