That’s when the top two gubernatorial finishers — regardless of political party — will advance to the November general election. And the Democratic candidates brought their campaigns to the state’s convention in San Diego this weekend to test their messages and jockey for position.

The two leading Dems in the governor’s race got two very different receptions at the convention.

Lt. Gov. Gavin Newsom has been courting labor unions, progressive groups and activists — the very people who come to these conventions. 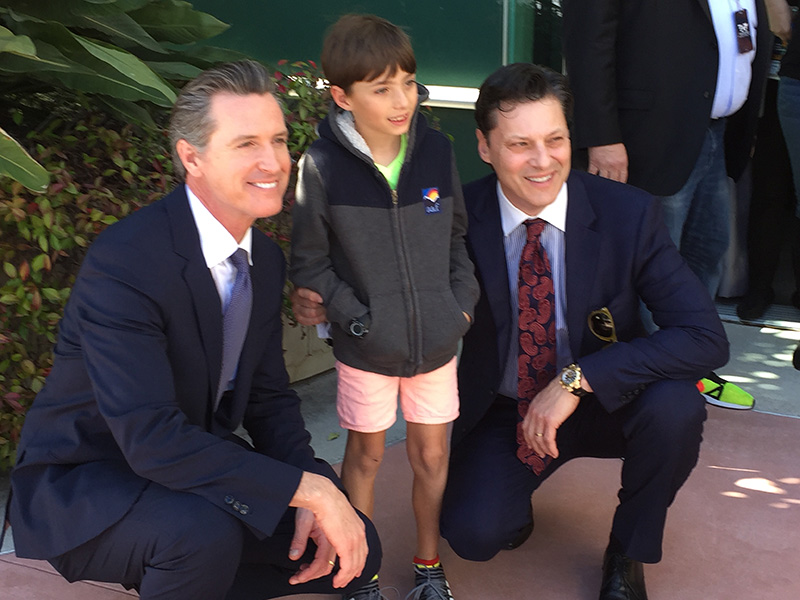 “Whassup? Whassup? Gimme some skin!” he told a boy who waited with his dad in a photo line after a Q-and-A session with supporters Saturday.

Newsom has carved out an agenda that included single-payer health care and ending cash bail — and he did not apologize for any of his stances when he spoke to the more than 5,000 delegates, elected officials and others in the convention hall.

“My opponents in this race have spent a lot of time telling us what can’t be done,” Newsom said. “We need a governor who says what can be done. One who has the courage to demand more.”

On the other hand, the convention wasn’t Antonio Villaraigosa’s crowd — and Villaraigosa knew it. The former Los Angeles mayor may have been a union leader and liberal speaker of the state Assembly. But as mayor, he infuriated unions by trying to take control of the city’s schools.

Villaraigosa told the convention the next governor must relentlessly focus on creating middle-class jobs.

“Being a progressive is more than a press release that helps politicians up the political ladder,” Villaraigosa said. “Progressive in California means helping millions more climb up the economic ladder.”

And he rallied farm workers outside the convention center as he picked up the endorsement of their union. The crowd chanted, “Si se puede! Si se puede!” 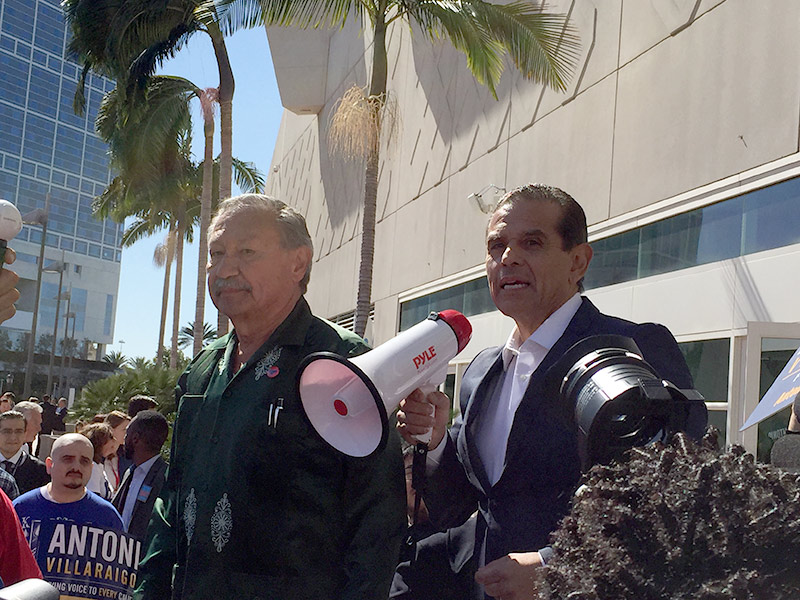 Gubernatorial candidate and state treasurer John Chiang gets a rap for being quiet and wonky, but he too sought to fire up the delegates.

“Hello, Democrats!” he yelled as his speech began.

There were a lot of Chiang backers in the crowd, as he’s won two statewide offices and is known as a hard worker who builds relationships with party activists and delegates. The treasurer trails Newsom and Villaraigosa in the polls, though — which you could tell from lines in his speech, such as this one:

“You deserve a governor with the experience to move a progressive vision forward — not just someone who talks a good game, but someone with the know-how to put our state in the fiscal position to actually get things done!”

“If Democrats can’t protect and grow the middle class in the richest state of the richest country on Earth, what good are we?” Eastin asked. “I’m running for governor of California because this country runs on other people’s children and we are failing too many of them!”

Then, there’s a fifth Democrat, who just announced her run for governor. Amanda Renteria surprised a lot of people by entering the race this month. She did not speak at the convention but made the rounds, anyway. She declined to discuss her policy positions. Instead, she highlighted her career working for two U.S. senators and as Hillary Clinton’s 2016 political director — which she suggested would set her apart from the other candidates.

She said politics lately has “been about the courage to get the policy done.”

She continued: “And that courage comes from an ability that you have done it before, and you know how to bring people together to do it.”

None of the candidates reached the 60 percent delegate threshold to secure the state party endorsement. Newsom finished first with 39 percent, followed by Chiang, Eastin and Villaraigosa, who earned just 9 percent.

Even though the candidates took implied shots at each other, nobody attacked anyone else by name.

Or, as Democratic political strategist Robin Swanson put it: “I actually thought they were pretty tame to each other. For a Democratic party convention, everybody stayed on their best behavior.”

But to Republican analyst Kevin Eckery, Newsom’s and Villaraigosa’s speeches stood out. “They had a clear message,” he said. “They knew who they were talking to. And they hit their marks when they were doing it. So I thought the top two guys showed why they were the top two guys.”