Nick Badal (left) and Nick Jones (right) are the founding members of a new band called The Livelies.

After years of friendship and jamming Nick Jones and Nick Badal finally settled on a sound and style and formed The Livelies.

Jones and Badal were in advanced guitar class together in high school, playing “angry teenager music,” as Jones puts it. Grunge-y, moody rock gave way to more happy, up-beat vibes. Jones, who writes the songs, sings and plays guitar, credits a lot of his style to Johnny Marr, the guitarist from English rock band The Smiths. 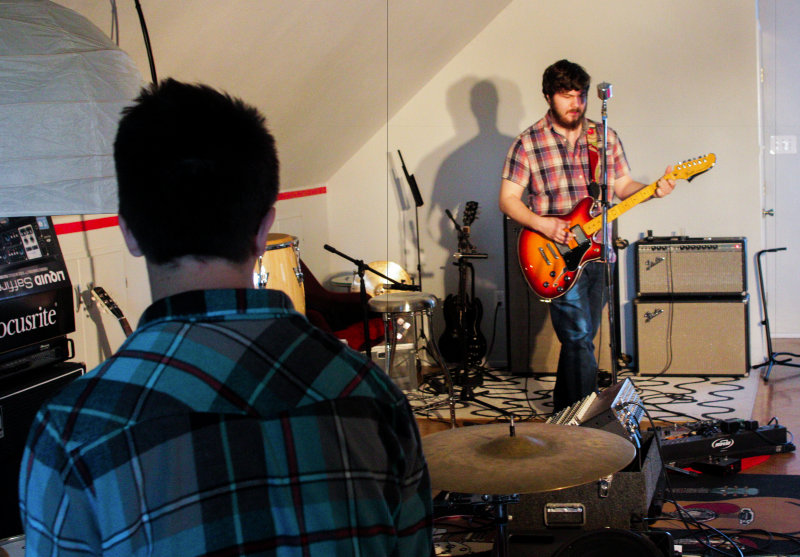 Jones and Badal began to explore that lively sound and found a style and a name.

“We found a sound we really like so we decided to try to record it,” said Badal in a phone interview. Badal plays drums and contributes to the compositions.

While they’ve been writing songs and playing as the Livelies for about a year, they haven’t played publicly. They shared their music with friends and family to get feedback and eventually felt they were good enough to go into the studio. The result is a really exciting, musically interesting EP entitled Solatic.

“We were both improving our musicianship by leaps and bounds,” said Jones about when they first started playing together. “[Now] we’re not changing as fast. We’ve found our style essentially.”

The song they’ve decided to let us share is called “Love’s Sweet Hell,” and it’s one of the newest songs they’ve written together. Jones said this makes him nervous because he hasn’t had the time to prefect it, but he said it’s gotten the most positive feedback from friends and family.

“When I hear most of our songs I hear what could’ve been done better. Since it’s the newest one I had the least time to improve it,” said Jones. “If it was just me I’d probably never release anything.”

Fortunately, Jones has Badal on drums to help move along the process and they're supported by Chris Noia on guitar and Andrew Steele on bass.

But what do you think? If you like the sound you can go see them play their first public show as The Livelies on Friday at Cafe Colonial with Average League and Control, show starts at 7:30 p.m., it’s all ages and $5 at the door.