California Republicans gathered over the weekend in San Diego for their state party convention, but after hearing from their two leading candidates for governor, they did not make an endorsement.

Backers of Orange County Assemblyman Travis Allen and San Diego businessman John Cox squared off outside a giant tent on the shores of the San Diego Bay, where delegates gathered to hear the candidates speak.

Inside the tent, the two candidates slammed California’s Democratic leaders, called for a reverse of the state’s direction, and threw shade at each other without criticizing by name.

Allen scorned Cox on social media over the weekend as a “beta male” for campaigning on themes Allen says he used first. He also attacked Cox for voting for libertarian Gary Johnson in the 2016 presidential race. 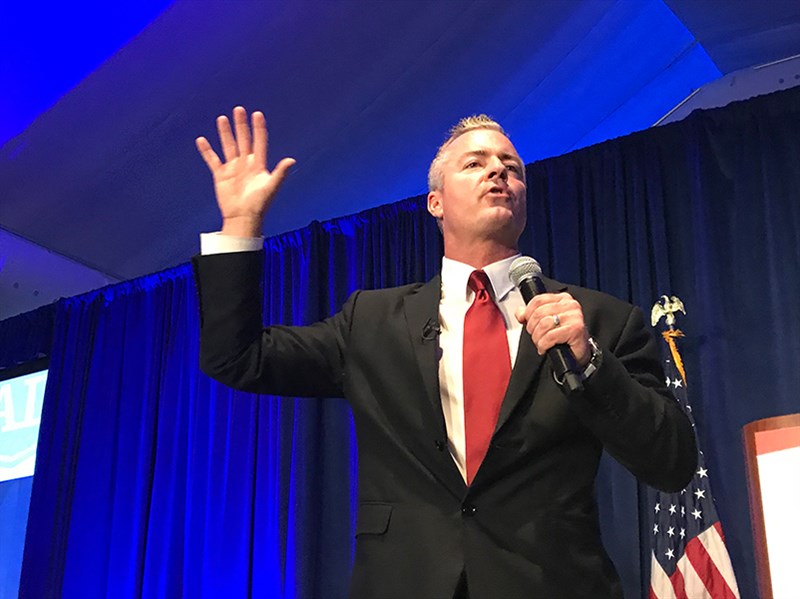 Orange County Assemblyman Travis Allen spoke as canidate for California governor at the state GOP convention on May 05, 2018.

After asking the hundreds of delegates and guests to stand up if they voted for President Trump, he added, “Think about this: There is only one candidate in the entire race that voted for, supported, even wrote op-eds in favor of the Republican nominee.” 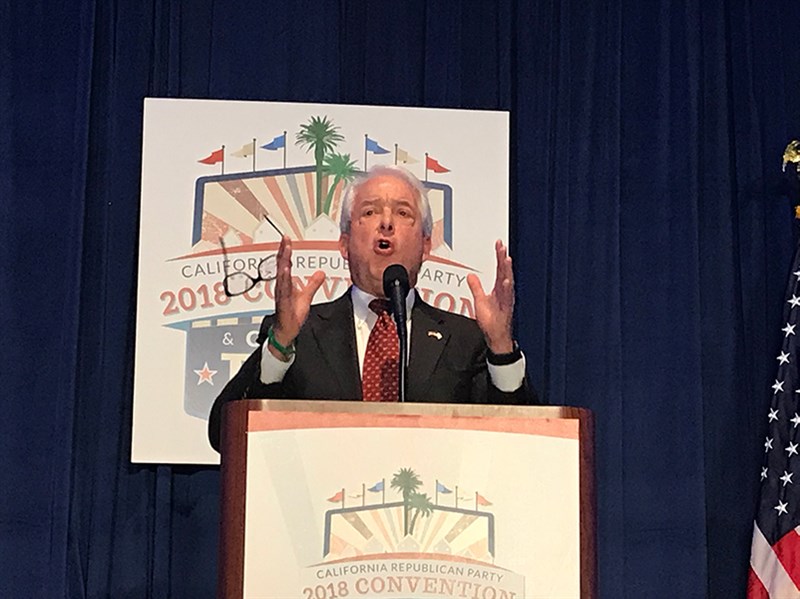 In his speech at 2018 California GOP convention in San Diego, Republican candidate for governor John Cox touted his endorsements.

“We need a candidate with the experience and the maturity to tackle this important job,” Cox said. “We need to make sure that we have a candidate at the top of the ticket who has a chance of winning.”

The California Republican Party Convention this weekend in San Diego came just before voting begins in the June 5 primary election. Counties begin sending out vote-by-mail ballots Monday. And the four leading Democrats will join Cox and Allen on a debate stage Tuesday night in San Jose (which you can listen to live at 6:30pm on Capital Public Radio).

The stakes in the gubernatorial primary for Republicans are high: The result could reverberate nationwide and affect which party controls the House of Representatives next year.

Only the top two primary finishers, regardless of political party, will advance to the November general election. Many California Republicans worry that if there is no GOP gubernatorial candidate at the top of the ticket, party turnout could plummet and put embattled members of Congress at risk. That, in turn, might increase the chances of Democrats taking back the House.

Both Cox and Allen think they would give the GOP its best shot not just at turning out voters, but also at winning the governor’s race.

“They’ve gone way over to the left. They’ve opened up the middle for us,” he said. “Let’s get leadership that really leads, and leadership we can be proud of. Let’s make the Golden State golden once more.”

Allen rattled off a litany of woes in California – from poverty to homelessness to cost-of-living – which he says have driven people to move out.

“We have been the silent supermajority. We have been the forgotten Californians. But I’ll tell you right now, ladies and gentlemen, we will be silent no longer!” he said. “This is our state. It’s about time that we take it back!"

Neither candidate was able to win the required 60 percent of delegates for a state party endorsement, but Cox’s 55 percent topped Allen’s 41 percent. Four percent voted for “no endorsement.”

Cox’s supporters sought to suspend the rules for a re-vote in hopes of reaching the 60 percent threshold. But that motion, which required a two-thirds supermajority, failed with 59 percent in support to 41 percent against.