Jessica Lamar and her children work on a bike in their pastor’s front yard. The family moved in with their pastor months ago after losing their home.

By Elizabeth Castillo, Next Generation Radio

Four months ago, Jessica Lamar had no idea where she would live. She learned that one of her kids would need round-the-clock care. Six of her other children were bouncing around from house to house living with her friends. Lamar was homeless with no housing prospects, because of a previous eviction.

“I have the income now, but it’s really the eviction that’s coming up and stopping people from renting to me.”

At the end of June, Lamar was given hope.  Her pastor and her pastor’s husband allowed Lamar and her seven children to move into their 900-square-foot home in West Sacramento.

On this day, Lamar’s kids played soccer in the tiny front yard, ran around shoeless, and ate popcorn and chips.

They all share one bathroom. Lamar’s children eat their meals in shifts because the kitchen is too small for everyone to eat together. Four of the kids sleep in the living room, they pull an air mattress in at night. The other three kids share a bedroom.

Lamar’s oldest son, Michael, has autism. He spends most of his time in the garage as a way to escape. Lamar says when they had their own home Michael had his own space. She says without housing of her own, things are challenging.

“Life is definitely an obstacle now,” she says. “Once I get into my own place, I feel like everything will go easier and flow like how it used to. Our life was really easy.”

Lamar has been unable to find housing because of an eviction and a $5,000 fee on her record. She says she was evicted after being $100 short on rent.

She says at one point she found a landlord willing to rent to her, but after three years, he sold his properties, leaving her homeless. Since then, Lamar said she’s tried but hasn’t been able to secure her own housing.

“Just about every property management or place that rents clearly specify no evictions, 600-plus credit score,” she says. “I’ve never had loans before in my name so I have a zero credit score and just one eviction on there so it doesn’t show that I have very much reliability.”

Several shelters in Sacramento confirmed they often have clients whose homelessness was caused by an eviction. Marsha Spell, the executive director of Family Promise of Sacramento, said that she finds transitional housing for families, but they are usually unable to find more permanent housing because of their eviction records.

Lamar said what she really needs is a second chance. She says she’ll keep filling out rental applications in hopes that someone will look beyond her past.

Lamar says she wants a normal life again — her own house, being able to send her kids to school on the bus, a job at UPS or FedEx — but admits she doesn’t have much hope.

“I don’t feel optimistic at all,” she says.

Still, she gets up every morning and puts on a brave face for her children because that’s “the daily life of a mom.” 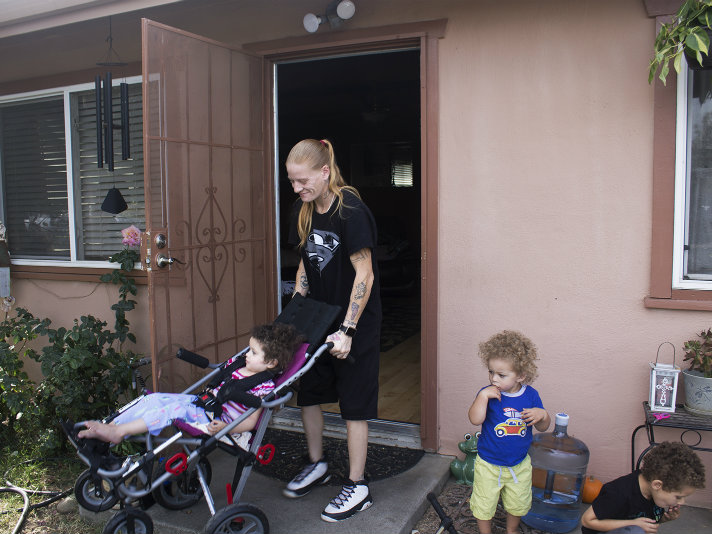 Lamar brings her daughter, Gia, into the front yard with the rest of her children. (Elizabeth Castillo / Next Generation Radio)

'We Don't Have A Mortgage — It's Fantastic’