For 52-year-old Steve Baxter, life with autism is a mix of humor and loneliness.

Both are on display in the Saturday night open-mic session at the Sacramento Mental Health Treatment Center, a county-run in-patient facility where Baxter has been doing stand-up comedy for two and a half years.

"Oh, Hi! My name is Steve Baxter. I'm a stand-up comedy kid. S-U-C-K, suck!," says Steve in front of a couple of dozen center workers and community members, some of whom may be dealing with mental illness. The audience needs a couple of seconds to register the acronym, then responds with a low chuckle, and one faint cheer.

Steve's in front of a stand-up microphone, dressed in his usual turquoise wind-breaker and blue jeans. His light brown straight hair is thin. So is his high-pitched voice. After a few lines, he pulls out a piece of folded paper from his fanny pack, prompting him of his PG rated routine.

The lines ranged from his personal fears:

"Gas stoves are dangerous. Let me tell you something: The day you see me cook with a gas stove is the day you see Ralph Nader in a Chevy Corvair."

"Back in 1983… the people that worked at the medicine companies used to tamper with them and they put a chemical on it. It should say Tylenol with Cyanide, kills the pain and you with it."

"Usher had a song called 'Oh my Gosh'… The name 'Usher'… what's he want to do, be a theatre attendant?"

Some of his jokes use over-the-top sound effects and wild hand gestures, with punch lines delivered with the arm thrust of an orchestra conductor.

The audience warmed to Steve as the routine went on. Steve maintained a subtle closed-mouth smile. The MC gave him a warm send off when he was done. Steve walked off the make-shift stage joining the crowd in applause.

After his routine, Steve made clear the mental health center was not the venue for his best material.

"Some people here don't like gay jokes or racial jokes," says Steve, adding that the center had asked him to tone down his routine.

Steve says his comic style is "tough talker," just like his favorite comedian, Don Rickles. It was Rickles' material that gave him the inspiration to be a comic. When Steve was 11, he memorized the entire Rickles album "Hello Dummy." More than 40 years later, he can still recite both sides of the record.

"(Don Rickles') routine is insulting the audience. That's how he became rich and famous," says Steve.

But getting rich is not Steve's primary motivation for doing stand-up comedy.

"I get noticed, and it's easier for me to find a friend." says Steve matter-of-factly. "But it hasn't been that way for me yet."

IN HIS OWN WORLD

Steve Baxter describes himself as a high-functioning autistic.

"I live in my own world. I don't know how to socialize correctly," says Baxter. "That's probably the main part of my autism.

Steve speaks about almost everything in the same tone; flatly. Whether he's explaining his desire for companionship, or recounting a past traumatic event, his explanations are straightforward and literal.

"Sometimes I go to bed early, even though I'm not working," says Steve, from his dimly lit apartment in Carmichael, Calif. His living room is dusty and sparsely decorated with old family photos.

"Sometimes I'm in bed until nine in the morning even through I've been awake for the past two hours before that."

But during the day, Steve stays active. He does many of the things you would expect from a single adult his age; he manages his own money, drives himself around, and cooks for himself. But he's almost always by himself, and that's not by choice.

"It's like (other people) know about me but I don't know about them," says Steve about this problems relating to people.

Steve says he doesn't feel some of the emotions that cause other people to suffer, like sadness. For example, when his mom died a few years ago, after the two had lived together for seven years Steve moved on.

"I was able to find a housemate that very same month… he goes to the same church."

Steve shows a great deal of self-awareness and understanding of his needs and challenges. And he can articulate them, in his own way.  But there is one feeling that holds him so strongly, it's become the core of his greatest struggle.

A JOURNEY INTO INDEPENDENCE

Steve said he never got along with his parents. When he was growing up, he said, his disability brought less attention from his parents, not more.

He was able to graduate from high school on time, but in early adulthood, his disability prevented him from holding jobs. 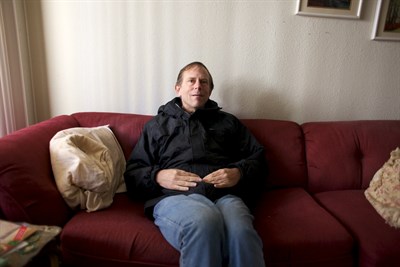 Around 1980, he held several jobs, but was fired from a few of them after a short time.  He delivered flowers, drove rental cars, and canvassed. At Burger King, he dispensed drinks before self-service was the norm.

"I kind of swiped a strawberry shake, but I wasn't stealing," recounts Steve. "They told me to throw it away, then I went after I was done with my shift, I drank one of the shakes …(and) I got fired."

After Burger King, Steve became eligible for social security benefits, which he has received ever since.

Steve says he's never felt discriminated against, but his life has not been easy. He was misdiagnosed as a paranoid schizophrenic for much of his adult life, and he says the medication prescribed to him made him feel suicidal.

During that time, Steve lived in a boarding home for 15 years, had to share a room with another person. Steve said he didn't have much "freedom" there, living there wasn't his decision.

"My dad told me I had to (live at the boarding home) or he won't accept any of my phone calls," Steve said.

It wasn't until he moved to Sacramento in 2002 to live with his mother that he saw a different mental health provider and got the right diagnosis.

His relationship with her improved with the move. She came to understand his autism better than anyone else, he says. But after she died a few years ago, Steve was left with not many family members or friends to speak of.

"I had a brother, three years younger. But he died," says Baxter. "So I'm kind of like a survivor of the family."

Steve doesn't let his disability, or his troubles keeping a job, prevent him from contributing to community institutions.

"I do volunteer work, so I can just... you know, find something to do," says Steve.

"(It's) a game called Wheel of Fortune but it has no wheel in it," says Steve.

One Thursday evening at Walnut House, a handful of seniors sit around circular tables in an activity room, calling out letters.

"'R!'" says out one elderly man in a wheelchair.

Steve writes on the dry-erase board, at times curling his tongue to his upper lip like a kid finishing up a drawing. Players guess letters for words like "carpet beetles" and "Portugal." Steve is a stickler for the rules.

"Only one guess per turn," he says, interrupting when a player wants to change a guess on a letter she called out.

Eighty three year-old Betty G. Mitchell has been coming every week for a year and a half. During the game, she squints at the white board, sometimes with her mouth hanging open. 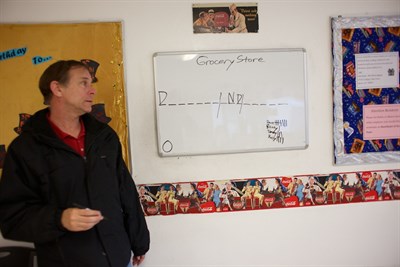 "He's pretty easy to work with. He's very considerate about everything." says Mitchell, about Steve's skills as game host. As far as his sense of humor, she says, "he's a little bit far out sometimes... And that's alright."

Mitchell says he doesn't make fun of them or criticize them, and she appreciates that.

While Steve entertains the elderly residents, his relationship with the staff is more problematic. He's been volunteering at Walnut House for 10 years, and says some people on staff are "scared" of him.

"I told them that I'm glad that I'm performing and I'm hosting the game. 'Maybe you know someone I can meet?'" says Steve, about asking for help finding a female companion. "I've been warned more than twice (not to do that). I'm lucky I've still got that position."

Steve has made a place for himself at his church, Lutheran Church of Our Redeemer. He found the church one day as he was walking, soon after he moved to Sacramento.

Steve attends Sunday services, occasionally filling the chalice at communion time, or carrying the crucifix. On Thursday mornings, Steve shows up promptly at 11 to arrange and staple the week's bulletins.

"Steve is disciplined and he is very faithful," says his Pastor, Jason Bense. "We've always felt Steve a major part of our community."

Pastor Bense says the Lutheran Church he serves has been striving for more diversity since the late 1980s, and serves as a "sanctuary" for many people who can't find a place in society. 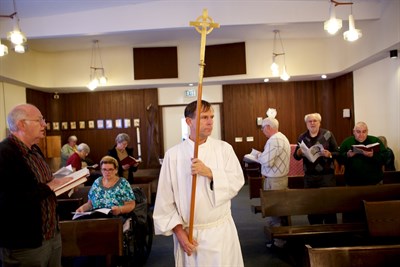 Steve, he says, is good with accounting tasks, and can always recall important dates.  At the same time, he recognizes Steve's trouble registering social cues and relating to other people. But he's "grown," and is working on his social skills.

"I enjoy sitting with Steve in the office because he helps me focus on other things that I might overlook about life and relationships," says Bense.

Steve says he believes in God, but has his doubts. "I'm sure a lot of people in different Christian churches go through that," he says.

He says the idea of "world religion" kind of scares him, but he describes this branch of Lutheranism as liberal and friendly. He's found friends here - his roommate for instance - and he wasn't able to do that at other churches.

A ROUTINE ON AND OFF STAGE

Steve sees his autism as a disorder of the mind, one that prevents him from doing things normal people do.  But, he says, contrary to common belief, autism doesn't give him any special gifts or savant skills.

Steve says he likes his life now - He sees his psychiatrist regularly. He knows him well and smiles when he walks into the office. Steve's now taking three medications and has no negative side effects.

"On Sundays I make Rice-a-Roni," says Steve while discussing his routine. He likes to listen to Top-40 radio, and watch TV. "Sometimes I use my computer, my laptop, to (look) at foreign places so I can feel like I've been there."

Steve says he feels anxious almost all the time, except before he goes on stage.

"I don't mind if people make fun of my autism just as long as they're doing it in a friendly way or affectionate way," says Steve. He adds that there's nothing wrong with making fun of your faith, nationality - or disability - as long as you're proud of it.

Even if he had the choice, Steve says he has no interest in giving up social security benefits and obtaining a job that he "hates." He says he wants to keep his freedom; a life that includes comedy, volunteering, and his quest for a lady friend.

"Do you know if there's any cure for autism?" asks Steve. "Because I wouldn't take it."

Return to showAutism Grows Up