Starting July 1st, schools around California and the nation must meet new federal requirements for school nutrition. Some are having better success than others in their quest to serve more fresh fruits and vegetables. The Winters Joint Unified School District just bought a new refrigerator to store all the fresh food coming from farms nearby. Marianne Russ takes us outside to learn about a farm to school program in Yolo County involving elected officials, schools and local businesses.

Before a scoop of steamed zucchini or broccoli lands on a third-grader's lunch tray, it's grown on a farm somewhere. In tranquil Yolo County in California's fertile Central Valley, the goal is to make sure that farm is local.

In the Esparto School District in the small town of Capay, Thaddeus Barsotti and his brothers guide the family business. Their farm, Capay Organic, is the lead supplier of fresh produce for the Yolo County school district's new "Harvest of the Month" program.

Barsotti stops near a cluster of farm workers taking a break from the sun under a small white tent. "So here we are looking at our heirloom tomato harvest. It's the heirloom jungle," he says, pointing to row after row of thick, green, tangled vines supported by metal rods and tied together with sturdy, white string.

The plants smell earthy and fresh, and are tall enough and dense enough to hide the workers bending over to pick the fruit. "You wouldn't know it, but there are 30 people in this field harvesting tomatoes," Barsotti says.

"So here we are looking at our heirloom tomato harvest. It's the heirloom jungle." - Thaddeus Barsotti, Capay Organic Farm

It's one of those near 100-degree days when heat shimmers above the dust of the field. A picker pushes vines aside to find fruit, tossing to the ground those that don't make the quality cut. They'll fertilize next year's planting.

Nearby, another worker assembles cardboard boxes that will soon hold the freshly picked tomatoes.

Capay Organic started in 1976 and now sells produce at farmer's markets, to restaurants and to stores like Whole Foods. Barsotti believes school kids should also have access that fresh, seasonal produce. That's why he's agreed to sell and distribute the fruits and vegetables and help run the Harvest of the Month program.

"We're looking at it as part of the mission of our company," Barsotti says. He sees his company's participation in the program as an investment, but also a financial experiment. In fact, he doesn't expect to break even in the beginning, because to make money, he must sell in volume.

Connecting Farms to Schools Is Key 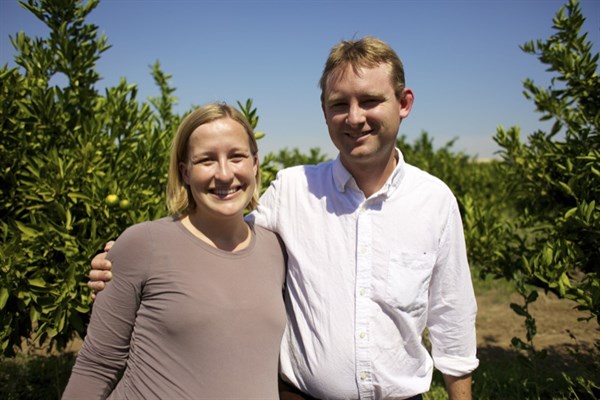 Barsotti was born here in the farmhouse 32 years ago. He's part of a fresh crop of young farmers, willing to take new risks. He believes in connecting farms to schools in an effort to help kids understand where produce comes from, and convince them to eat more of it.

"You're going to end up with kids that grow and mature into adults with good eating habits. You're going to see the cost of health care reduce, but it's not a quick solution. It's one of those slow and grinding toils that our generation has to take up if we want to see this change." 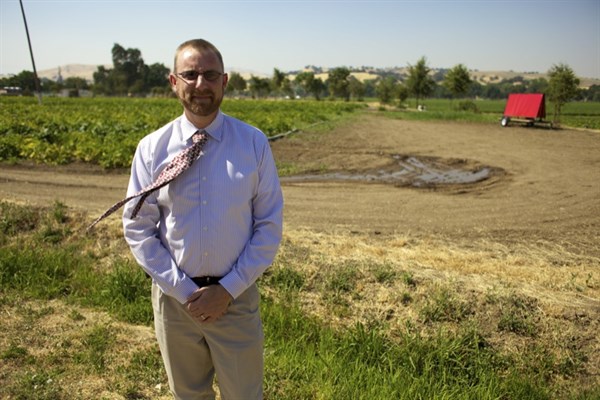 Yolo County Supervisors are committed to that change. They've taken the unusual step of writing it into the general plan. John Young is the Yolo County Agriculture Commissioner and the only Ag commissioner in California who's leading a farm-to-school effort.

The county is ideally situated for it, with agriculture being the county's number-one industry. The 662 farms there do about a half-billion dollars a year in business. Young says keeping some of that money circulating in the local economy leads to growth. "The more that money grows, the more money's spent in your local economy and pretty soon you become a self-sustaining economy, and really that's what the local food movement is about," he says.

Yolo County is launching the Harvest of the Month program this school year. Every month a different fruit or vegetable is highlighted in the classrooms and cafeterias in every school in the county. The program isn't fully funded, but Young says the county is taking the leap anyway, relying mostly on volunteers and a Costco-style sales approach.

Back at the Capay Organic farm fields are being irrigated and fertilized for planting. Barsotti says his produce as to taste good enough for kids to eat it. "We grow a great variety of Knott's carrot," he says. "It's very sweet. Kids love it. But because it's sweet, it's really crunchy and crispy and that's why most shippers won't use it because it breaks on the way to its destination.

"But we don't care about that. We want good, quality, local food that tastes great, and we're not shipping it very far so we're not concerned," Barsotti says. 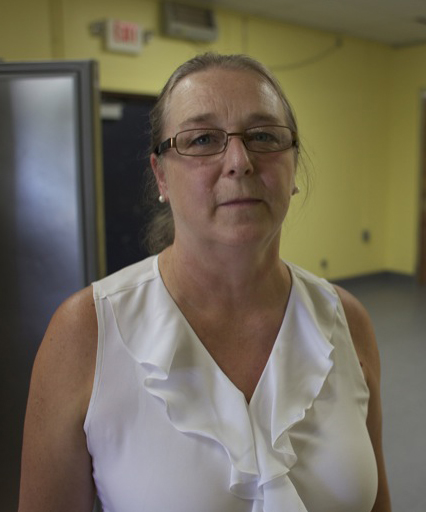 During the school year, the kitchen bustles with five food service employees who will prepare 730 lunches a day. Workers today are installing new, non-skid flooring in the nearly empty kitchen. The shiny ovens, stoves and coolers have all been moved into a giant jumble in the cafeteria.

Olsen is making way for a new appliance. "We need the walk-in refrigerator because we're serving more fruits and vegetables than we could store in our existing facilities," she says.  A lot more. "The crunch really came this year because the amount of fruits and vegetables, and the variety raised, was raised dramatically. Maybe 250 percent."

New federal regulations require schools to put more fruits, veggies and whole grains on kids' plates beginning this year. But Olsen had been moving the district in that direction for the past couple of years. The Winters district has been part of the USDA grant program with UC Davis that helped to increase the consumption of specialty crops, like Romanesco broccoli, painted serpent cucumbers, Asian pears and fennel.

"I mean you can't get more Farm-to-School when some of the best farms in the nation are right up the road." - Cathleen Olsen, Director of Food Service, Winters Joint Unified School District

Olsen also launched a local version of the national farm-to-school program. "I mean, look at the bounty that is here. I mean you can't get more Farm-to-School when some of the best farms in the nation are right up the road," she says.

Olsen owned a restaurant in Davis for 23 years, so she knows how to make produce taste good. She's also energetic and incredible creative. On the day she introduced candy-striped figs, she got out her camera. "And one of the students asked me what the camera was for, and I said I was taking photos of fig-eaters, and this happened to be a little girl who'd never eaten a fruit or vegetable in school, and she's in the second grade," Olsen said.

"And I'm thinking, she goes 'well, maybe I'll try a fig.' And I could hardly believe it, because no one tries a fig first. She wouldn't eat watermelon the week before, or strawberries the week before that. I mean nothing. But she tried a fig so that I would take her photo, and she liked it. So now she's started asking all the time, 'where are the figs? When are we having figs?'"

Olsen says that often, the kids take that excitement home with them to their parents. "I actually had a parent who'd never heard of broccoli call me up, and with her child as translator explaining it to her, and how to cook broccoli."

Adding more fruits and vegetables can be expensive. The federal government is giving schools six cents per meal to implement the new regulations.

Olsen is also concerned about the effects of other requirements; such as the way kids are served. She says food service employees must put a half-cup of fruit or vegetable on each student's plate in order for the district to be reimbursed by the federal government for the meal. "To make the kids put the food on their plate, when they're not going to eat it, it's wasteful."

She said the increased waste would drive up costs for the food program. Nearly two-thirds of the students in Winters are eligible for free or reduced-price meals based on family income. Students eating reduced price lunch pay 40-cents, compared to $3 for the full-priced meal. Olsen says 86 percent of this year's meals will fall into the free or reduced categories, so federal reimbursements will account for most of the food service budget.

The new walk-in fridge is a $45,000 renovation that's coming from that budget. To make things pencil out, Olsen depends on canned commodity items purchased at deep discounts. She can't always justify buying fresh foods. "You have 100-plus servings in a case of peaches for $3, so the cost is pretty low," she says. "And when you buy a case of fresh peaches, and I'm going to guess from last year's memory, let's say it's a 48 count and let's say if the price is good, it's somewhere in the $20s. Pretty dramatic difference, cost wise."

A recent farm-to-school fund-raiser brought in about $20,000. Olsen said she'll need to continue to raise funds every year to keep improving school lunch. Her "if-you-offer-it, they-will-eat-it" philosophy is working, especially with grades kindergarten through third. But junior high and high school students haven't caught on yet.

"When you acquire a taste for things, it sticks with you. So I think it'll make a great difference." - Cathleen Olsen

Take lettuce, for example. "So the amount that we serve in K-3 is the amount in a day. It's four times the amount the amount that the other grades will use in a week," she says. "Some of the other offerings have never gone through to the older grades because we know we can prep them and send them there and we're wasting our money because we're going to end up throwing it away."

For example, Olsen says broccoli is served only to elementary students, but one day they'll be the older kids. "I just can't wait to see some of these kids when they're in high school. That will be the telltale sign. Are they still eating these things? And I think they're doing it in kindergarten through third grade, they will be. When you acquire a taste for things, it sticks with you. So I think it'll make a great difference."