Hmong Community Members Teach for a Healthy Next Generation

Twenty-eight year old Fi Dan Lo is using his advanced degree in public health to bring awareness about diabetes in the Hmong community. His father's passion for teaching, and his health problems, inspired Fi Dan to excel in his own education.

Fi Dan's father, Chia Chao Lo, was diagnosed with diabetes in 1985, about a decade after he emigrated from Laos. Mr. Lo says food, physical activity, health, everything is different here in the U.S.

"The reason why they're dying of diabetes is because when they came to the United States, they tried to eat and consume whatever they didn't have in Laos," says Fi Dan, interpreting for his father.

Through the Hmong Women's Heritage Association, Fi Dan helped conduct research about the prevalence and understanding of diabetes in the Hmong community. He found that as many as 20% of those surveyed had diabetes. But he also found that they're hungry for education about the chronic disease.

"They really, really would like to see a lot more programs that have activities for older folks out there. They want a safe place to exercise."

"Our community survey said that more than 20% of our individuals had diabetes in the Hmong community," says Lo.

Fi Dan grew up in Sanger, California with his father and the rest of the Lo family. He visits them often.

On this Saturday morning in Sanger, Fi Dan sits on the couch while his father, Chia Chao Lo gives his 11 year-old adopted daughter math and French lessons. Fi Dan remembers when he received the lessons.

Fi Dan's dad is from Laos in Southeast Asia. He was enlisted by the U.S government to serve against the communists during the Vietnam War. He and many others came to the US from a refugee camp in Thailand in the 1970s. There are almost a quarter of a million Hmong people living in the United States, many of them settled in California's Central Valley. Fi Dan helps translate his dad's story.

FOR THE LO FAMILY, DIABETES IS A FAMILY MATTER 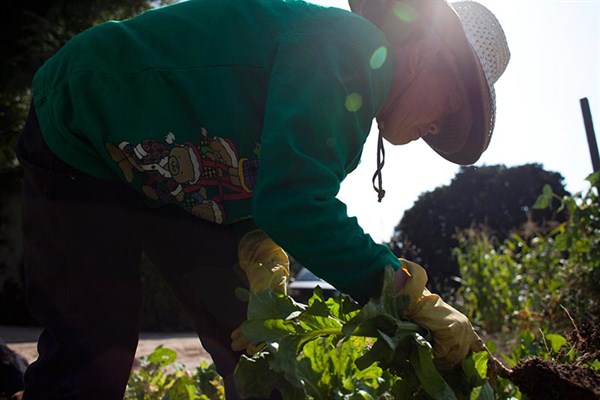 The Lo family lives in Sanger, a rural community just outside of Fresno. The family has about an acre of land to farm, some chickens, and a few dogs.

Fi Dan's mother, Pa Vang Lo, is proud of the gardens that wrap around the house. Mrs. Lo says they grow all the vegetables they eat. Corn, green beans, sweet potatoes, mustard greens. She's a busy woman. She works as a full time nutrition aide, cooks, cares for their daughter, runs the garden and takes care of her husband. He was diagnosed with diabetes about ten years after they moved to the US.

As Mr. Lo sits on a couch in their living room, his wife helps take his blood pressure. Mr. Lo is wearing a camouflage cap, khaki pants and a grey polo shirt. He's a thin, small man. He points to his sagging left eye.

"This one is plastic now. Blind. Left eye blind," he says.

"It was bleeding a lot in his eyes," says Mrs. Lo. "So that's why they do the surgery, it's caused by the diabetes."

Diabetes also caused Mr. Lo's kidneys to fail years ago. Since then, he's been dependent on dialysis. He chooses to do the treatment at home - four half-hour sessions a day.

First Mr. Lo drains yellow waste fluid using a tube attached to a hole in his abdomen. Then he introduces a fresh bag of dialysis fluid into his body, and it and sits there until the next dialysis treatment. The process removes toxins from the blood, a job healthy kidneys normally do. The health complications of diabetes largely keep Mr. Lo housebound.

Many Hmong say they didn't know diabetes back in Laos and Thailand. Mr. Lo says food, physical activity, and health, is all different here in the U.S. Fi Dan interprets for his father.

"In Laos, they had to walk a lot. They didn't have cars, so everywhere they went they just had to walk. He also said that as soldiers, and even in Laos, it's a poor country so they didn't have a lot to eat in a ways and they did a lot of physical activities. In contrast, coming to the United States, everywhere you go you don't get to walk a lot. Everywhere you go, you go into your car, you just drive every place you go. [He also says] The food here, they make it too good. There's a lot of fat in the meats they have here. The food, they use preservatives for the food...He says that once they came here, those foods taste way better than what they had in Laos, so they consumed more, and they also consumed more sweets like sugary drinks."

After his diagnosis, friends and family encouraged Mr. Lo to use traditional Hmong healing practices. At first, they got help from a shaman, and used herbal remedies. Fi Dan translates again for his father.

While Mrs. Lo chops beans from her garden for a Saturday morning meal, she explains how cooking for her husband's health has required some experimentation.

"I learned that each time he eats the regular rice, it makes his sugar go up way, way high and sticky rice is make it more higher, and that sugar stays more longer. But when I change my way to be like brown rice with almost two meals or three meals, we are able to control his sugar way down." 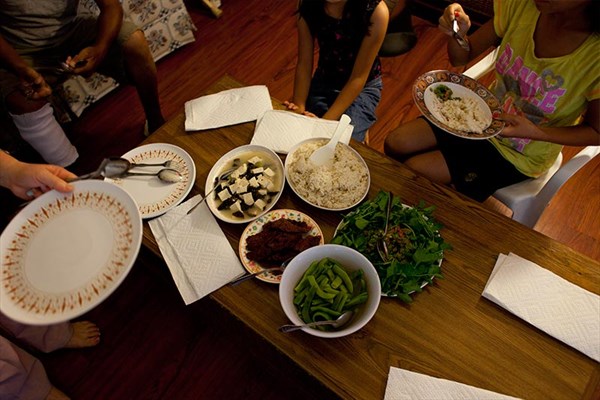 Mrs. Lo says she's the one who likes change. Her son says she was one of the first people in their community to cook brown rice for the family. But they didn't always like it. Mrs. Lo not only had to learn how to make healthier food, but how to get her husband to eat it.

"So what I do for him, I don't really tell him that this is only for you but I say 'It's for family but you need to eat a little bit more,'" explains Mrs. Lo. "So every time I make meals I don't make special for him. Everyone need to eat the same."

But Mr. Lo still has an appetite for unhealthy foods, a tendency his wife is constantly keeping in check. Ultimately he realizes, she's keeping him alive. He says he knows many people who went on dialysis after he did, who have passed away. Fi Dan Lo interprets for his father, Chia Chao Lo.

"When he finds out that a lot of his age group has passed away, he feels they didn't have a really strong support group. He said that their wives must not take care of them as well as my mom has taken care of him, and that's probably why they've all passed away before he has."

EDUCATING FOR A HEALTHIER GENERATION

Fi Dan Lo lives in Sacramento now with his own family, but he visits his parents in Sanger often. His father's passion for teaching, and his health problems, inspired Fi Dan to get an advanced degree in public health.

At the Hmong Women's Heritage Association in South Sacramento, Fi Dan heads up research and grantwriting for their community diabetes work. He knows from experience that it takes a lot to manage, and reverse chronic disease.

"If you want to treat somebody with diabetes then, really, your environment has to change and it starts with your family," says Lo.

Through surveys and focus groups, the Hmong Association gathered much needed information to help combat diabetes in their community. Lo says community members would like to see more programs or activities for the elderly Hmong population.

In late October, a community health worker named Youa Lo led the Association's first diabetes workshop with Fi Dan Lo. More than 20 people attended. Most of them were diabetic. As they explained the basics of diabetes, the older crowd listened intently. None took notes, but they weren't shy about asking questions. 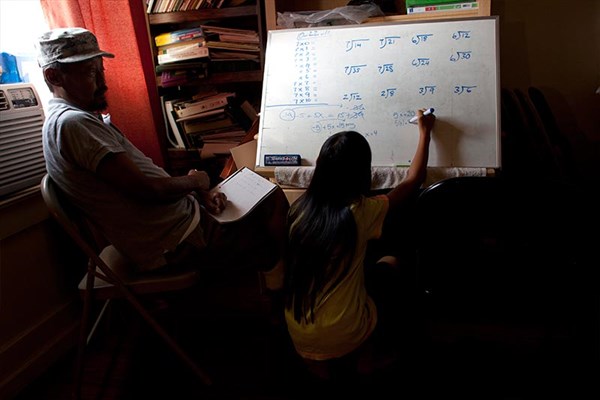 An English-speaking independent health educator showed simple ways to be more active at home. Youa Lo translated, using the English word for exercise. There's no such word in the Hmong language. Soon they were all on their feet, lifting arms and legs to music.

"A lot of people were laughing, especially during the exercising routine because you know, they don't exercise much. So like exercising might be a little funny to them, but I think they enjoyed it a lot," says Fi Dan Lo.

Fi Dan joined them in exercise. He was one of the youngest people in the room.

"I think me and my dad, we are a lot alike," reflects Fi Dan. "We like to teach, we like to encourage people."

Fi Dan says this is the first time people here have been taught about diabetes, and he hopes it won't be the last time they hear the health educators' words.