You Asked Us About Lake Tahoe’s Crowded Beaches, Lake Monsters And More. Here’s What We Found Out. 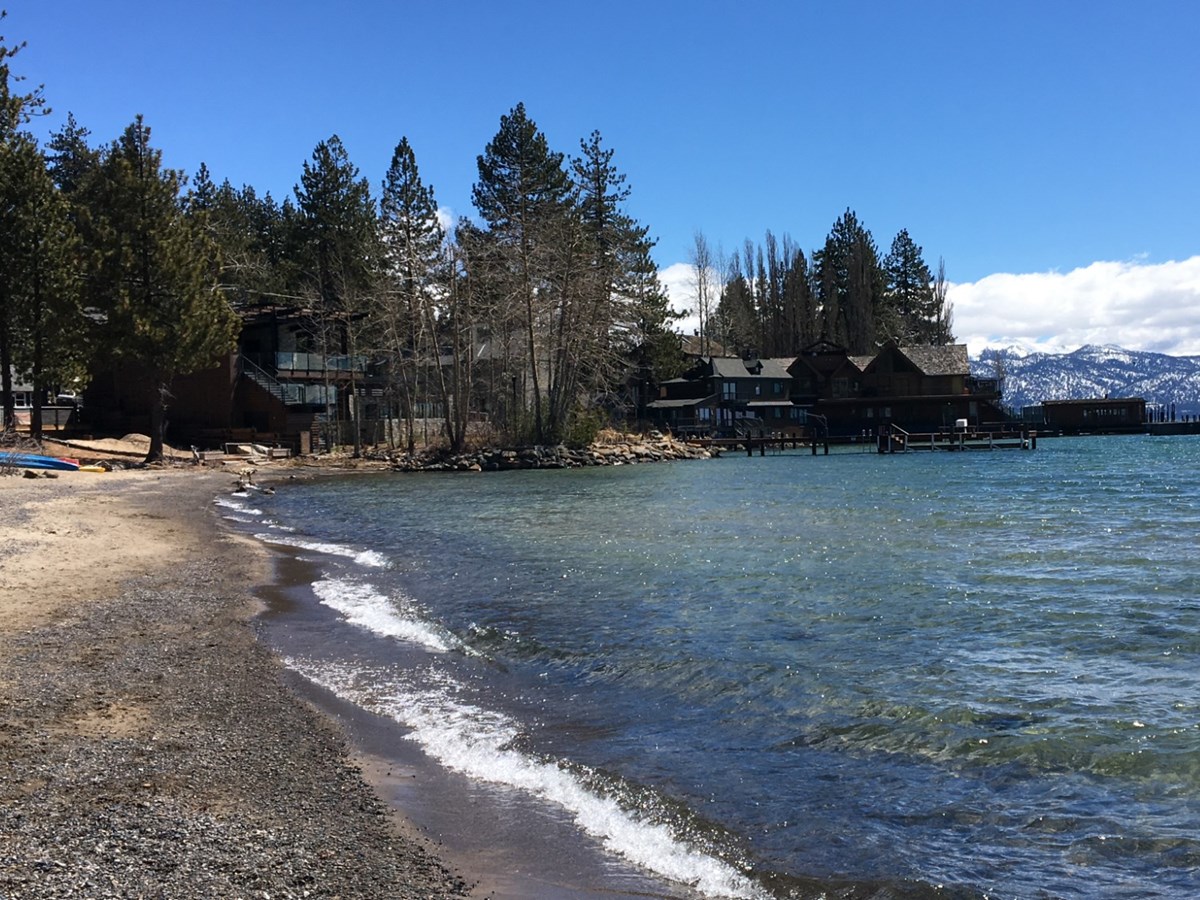 Tahoe is a region beloved by many, and when we decided to do a podcast about it, we knew we’d want your help. So we asked for your questions, and you delivered. Now it’s our turn.

We went to the experts and tracked down the story behind Tahoe Tessie, got details on the fight against pollution and found out how cold the lake is deep down below the surface (hint: very!).

Here’s what we learned.

And stay tuned: We’ll add more to this page as we continue to investigate your questions. You can still tell us what you want to know here.

What is the water temperature down near the bottom of the Lake? — John Hull

Generally, the water at the bottom of Lake Tahoe, 1,600 feet below the surface, hovers around a chilly 39 degrees Fahrenheit.

“It fluctuates just a little bit,” says Jesse Patterson, chief strategy officer of the League to Save Lake Tahoe, known for the “Keep Tahoe Blue” slogan. “And mostly what affects the water temperature down there is lake mixing, so how much the lake mixes from the top to the bottom.”

Warm water is less dense than cold water, Patterson explained, and if the surface temperatures warm up a lot, really quickly, the difference in density between that water and the really dense cold water at the bottom of the lake becomes so great, it becomes too hard for the lake to keep mixing.

“It can’t turn over,” Patterson says. “Because the energy needed to break through that density barrier is too great.”

The lake water used to mix completely, from top to bottom and back up again, about every four years, but 2017 was the sixth year in a row without full lake mixing. And when the lake doesn’t fully mix there are consequences, including a lack of oxygen at the bottom of the lake — which affects lake life — and changes to algae blooms.

Average temperature of the entire lake over the whole year has been increasing steadily since they began measuring back in 1970. In the last five years the average lake temperature has warmed 10 times faster than the previous 40 years.

“So we’re all sort of watching to see what happens,” Patterson said.

Is plastic pollution affecting Tahoe and the Sierra Nevada watershed the way it is affecting marine environments? — Arianna Smith

Yes, plastic pollution is affecting Lake Tahoe, Patterson says, but it’s not as big of an issue as it is in the ocean.

“It’s not quite the same level as it is in the marine areas in the sense that we have these massive gyres in the ocean and it’s working its way in through the food chain and all that,” he said.

“We’re finding it on our beaches in high numbers,” Patterson said. “It’s not pretty to look at. It affects wildlife. It stays in the environment forever.”

The League uses data from their clean-ups to advocate for solutions for better plastic disposal and, in some cases, restrictions on plastic use. In South Lake Tahoe, for example, the data was used to help pass ordinances banning styrofoam and plastic bags.

Patterson said the only way to get rid of plastic is to remove it or not put it there in the first place, and he says it’s up to everyone to do their part.

Public beach space is at a premium during Tahoe summers, are there plans for beach expansion? — Patrick Maloney

On peak weekends in Tahoe — like Fourth of July, for example — the beaches get packed, especially at hotspots like Sand Harbor and Zephyr Cove.

For agencies like the California Tahoe Conservancy and the Tahoe Regional Planning Agency, acquiring more beach for public use is a priority. But there’s only so much lakeshore: 72 miles of it to be exact. Currently, 34 of those miles are publicly owned.

“What this really means is, if there was a willing seller among the lakefront homeowners, we would jump at the opportunity if the price was within reach,” said Conservancy spokesperson Chris Carney.

In the meantime, Carney encourages beachgoers to use TahoePublicBeaches.org, a new online tool where you can find less crowded beaches.

“It allows you to search to see which of the beaches allow dogs, or where you might be able to rent a kayak or a paddle board,” Carney said. “And it really is a handy tool if the beach you are headed to turns out to have a full parking lot and you gotta find another option.”

Devin Middlebrook of the Tahoe Regional Planning Agency said while expanding physical beach isn’t always an option, other opportunities to increase access include improving transit routes and other amenities.

And he noted that while the amount of public shoreline has more than doubled since the 1970s, a new factor is now affecting beach access: extreme precipitation patterns. In drought years, for example, at certain beaches the lake may have been 400 yards from the beach. Whereas this year, there’s basically no beach because the lake is full.

“So when we're thinking about climate change, the extreme changes in lake level have a great impact on the public's ability to access the lake,” Middlebrook said.

Since Nevada has less restriction over water pollution than California regarding the lake, what can be done to control pollution into the lake from Nevada? — John Hingtgen

First of all, does Nevada have less restriction over water pollution than California when it comes to Lake Tahoe?

Jesse Patterson of the League to Save Lake Tahoe says “less” might not be correct, but the states do have different water quality standards.

“The reason that matters for Lake Tahoe is because all the water drains into the lake, whether it's from California or Nevada, the lake really doesn't care where the water comes from,” he says.

Patterson says his organization and the Tahoe Regional Planning Agency look at the issue of lake pollution holistically, working with the two states, four counties and two cities that all have a different piece that they’re managing.

“Because man, pick a spot on the lake and it's probably three different agencies that need to work together on that one particular issue,” he said.

The TRPA, formed in 1969 by a bi-state compact ratified by Congress, was the first bi-state regional environmental planning agency in the country. In 1982, the organization adopted regional environmental standards, called thresholds, that are uniform across the lake. The TRPA measures the water each year against these standards and reviews the data every four years to see how the lake is doing. And the agency is currently in the process of updating those standards, which are nearly 40 years old.

“This is going to be an ongoing process over the next several years to get these updated and so it's certainly something to track,” Patterson said. “But we're looking at ironing out those inconsistencies between the states and making sure we're using the best available science.”

What is the history behind Tahoe Tessie? — Allison Savage

This question came to us from our friends at KQED's Bay Curious, who put a call out to their audience as well.

If you’ve yet to hear the legend, Tessie is the name given to Tahoe’s version of the Loch Ness Monster (or Nessie, as its known).

Dave Antonucci is a longtime Tahoe resident and engineer who studies Tahoe’s natural history and takes a scientific approach to Tahoe myths. He says scattered, infrequent reports about people seeing something “large, indescript, and kind of prehistoric-looking” in the lake began about 50 years ago.

“Some of these can be explained as shadows on the water or waves or debris like a log or something like that, but others were a little more credible,” he said.

Antonucci points out that Lake Tahoe is only 3.5 million years old, so there’s no way a prehistoric monster is inhabiting the lake. But he thinks there is something there. His guess? A sturgeon. 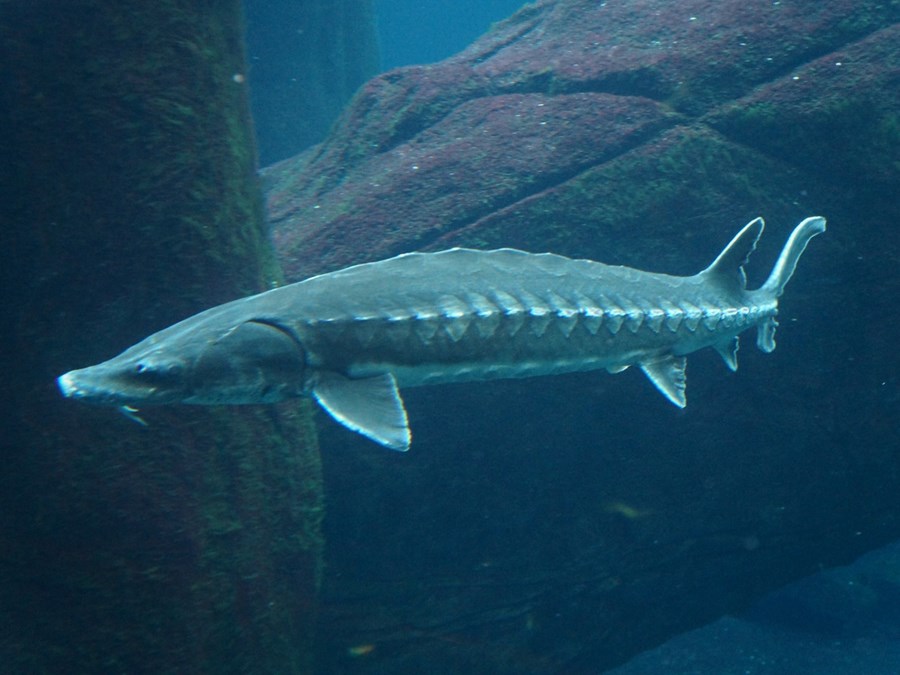 A sturgeon swimming in a large saltwater pool.Jiaqian AirplaneFan / Wikimedia

“If you've seen one, it kind of has a prehistoric look to it,” he said. “It's kind of scaly, with large fins and kind of a dinosaur-looking snout. They grow quite large. They can grow up to 22 feet long, and the conditions in Lake Tahoe are such that they could survive.”

There’s no photographic evidence of Tessie, but Antonucci says there was a period where different species of fish were being introduced into Lake Tahoe, and sturgeon could have been one of them.

“We'll see, if it dies, sinks to the bottom, and then there's no sightings after that, then we'll know, maybe that was the case,” he said.