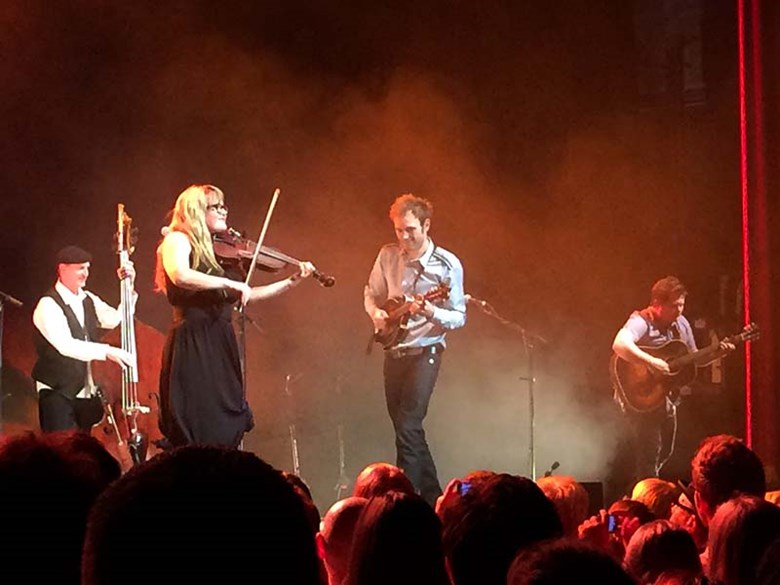 Nickel Creek performs in May in Oakland.

They sure have come a long way from their Little Cowpoke days.

This year, Southern California acoustic Americana trio Nickel Creek turns 25 and celebrates the occasion with a new album and nationwide reunion tour, including a recently added show at UC Davis’ Mondavi Center for the Performing Arts on August 3. Loyal fans are jubilant.

Sara Watkins (fiddle), her brother Sean Watkins (guitar), and Chris Thile (mandolin), began touring together as children in 1989, releasing Little Cowpoke and Here to There in the ‘90s. After pairing with Allison Krauss to produce their first studio album, Nickel Creek, in 2000, the nominations and awards came pouring in, including the Grammy for Best Contemporary Folk Album (This Side) in 2003.

Nickel Creek has always expertly woven together a sound from bluegrass, pop, folk rock, Americana, and even classical influences. But their new album, A Dotted Line, does so with new vitality — the product of a seven-year hiatus in which the musicians each pursued solo projects and other collaborations, adding to the breadth of their already incredible talent.

“The thing I’m most grateful about is that [the fans] are coming with us,” Sara said before taking the stage in Chicago last week. “Of course they want us to play things from earlier records, but that they’re also coming with us for the new music makes us feel like it’s a shared experience with the audience.”

Sara, Sean and Chris have each produced at least two solo albums since completing their Farewell (For Now) tour in 2007. Sara has collaborated with the likes of John Mayer and The Decemberists, and guest hosted A Prairie Home Companion with Garrison Keillor. Sean formed the indie folk duo Fiction Family with Jon Foreman (formerly of Switchfoot).

Chris formed another progressive bluegrass band, The Punch Brothers, in 2006, and worked with Yo-Yo Ma, Edgar Meyer and Stuart Duncan to release The Goat Rodeo Sessions in 2011. He has recently toured solo, performing Bach’s violin Sonatas and Partitas reimagined for mandolin. His performance at the Mondavi Center in February was extremely well-received.

“[The time apart] has made us all much stronger as individuals, and ultimately as a band.” Sara considers Keillor a particularly good mentor: “He has been so generous to me,” she said. “You learn a whole lot from watching that show [A Prairie Home Companion] from the sidelines. How he reads the audience and reads the timing. It’s remarkable.”

At a recent show in Oakland, Chris joked that Nickel Creek disbanded simply because they had run out of creative titles for their instrumental pieces. Once the ideas started flowing again, it was time to regroup.

In reality, the musicians were mulling over a bit more than just creative titles, but only by their combined efforts did these ideas get off the ground. When the trio reconvened in Chris’ apartment last June, each musician brought a few “song starts”—unfinished melodies, chord progressions, or lyrics—to polish for an EP.

The first project was “Destination,” a song start Sara had tried unsuccessfully for years to complete. “I couldn’t hone in on the subject matter,” she said. “I knew the vibe I was going for, a dissatisfaction with wherever you are, but I couldn’t figure it out lyrically.” After some input from Sean and Chris on the lyrics and arrangement, “it kind of came naturally”—a benefit of knowing each other so well. “There’s a shorthand we have communicating now, which speeds things along,” Sara said.

Their musical and personal bond was so effective that Sara, Sean and Chris soon realized they had plenty of material for a full album. The most creatively titled of the new instrumental pieces, “Elephant in the Corn” is a bouncing, whimsical treat. Other highlights of the album include “21st of May” — Sean’s humorous tune predicting the end of the world — and an infectious, danceable cover of Canadian new wave band Mother Mother’s “Hayloft.” A Dotted Line seamlessly transitions between these tracks and more melancholy songs like “Christmas Eve,” and “Where is Love Now” (a Sam Phillips cover), which beautifully display each musician’s vocal prowess.

According to Sara, Nickel Creek’s ranging style arises organically from the songs they love to hear.

“We don’t really think, ‘Let’s try to play a pop song now.’” She said. “If there’s a song we really like, we play it because it’s exciting and we want to figure it out. To learn the parts by playing them, you get a great intimacy with the song.”

Just what this tour means for Nickel Creek’s future remains to be seen, but for now, they are living in the moment.

“We are not planning very far into the future. Instead, we’re going to enjoy the diverse turn our careers have taken and enjoy all the things that come with that,” Sara said. “We don’t have to pick just one thing, so we don’t want to.”

Joining Nickel Creek on the tour are The Secret Sisters, a charismatic pair of sisters from Muscle Shoals, Alabama with a definitively more twangy, country sound than the main act. Laura and Lydia Rodgers are fresh off the release of their sophomore album, Put Your Needle Down, produced by the legendary T Bone Burnett. Despite their name, it’s no big secret that these talented young songstresses are related. Their feisty on-stage interactions invite the audience in, like just another member of the family, privy to both the sass and the love they share sitting with relatives around the piano.

The Rodgers’ come from a strong musical background, abundantly obvious from the ease with which they transition between the sweet, poppy “Good Luck, Good Night, Goodbye,” the heartfelt “Let There Be Lonely” and the feisty murder ballad “Iuka.” And the smoky “Dirty Lie” — a collaboration with Bob Dylan himself — is not to be missed.

Fans new and old will love the show, which offers a little of everything from both groups’ impressive catalogues.

Tickets are available at Mondaviarts.org.