The Kentucky Sisters And Old-Time Tunes As Doorways To History 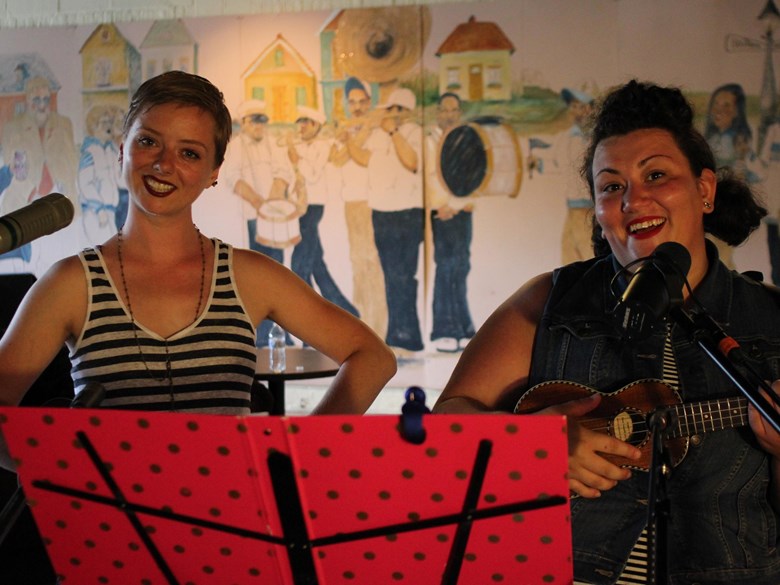 Did you know that John F. Kennedy was a Republican? Neither did I. But that's what one of my college students guessed in a course on news writing. I asked another kid what period followed the Industrial Age and she said, "The Golden Age?" We moved on.

But whenever I'm tempted to despair about a generation that looks ever-forward, I buy a cupcake and a big mug of coffee. That's because Launa Reed works at a cafe in New Orleans that sells the best cupcakes in the history of cupcakes — you can quote me on that. And her friend Jo Morris manages a coffee shop two blocks away that sells a mighty fine drip. Outside the land of coffee and cupcakes, Reed and Morris are known as The Kentucky Sisters, a ukulele-driven duo. The two are not yet 30, but their music reaches back generations.

The Kentucky Sisters live on Kentucky Street in the Ninth Ward. They sing old-time harmonies, mostly from the 1920s, '30s and '40s, but they don't know much about the songs they sing. Morris and Reed find old hits on YouTube, work out the harmonies, add ukuleles and give the songs an even more vintage style, circa 1928. Morris says that's their sweet spot.

"I think, for me, I already had a little voice. And it sort of lends itself really well to this kind of music," she says.

"I'm a sentimental sucker," Reed offers. "We love to talk about songs that we choose; we romance ourselves while we're singing them. They're so dreamy and also very classic."

Morris and Reed, who perform in nightclubs around New Orleans, are on an emotional tour through musical history. They learn songs by Johnny Mercer, Louis Armstrong, Hoagy Carmichael and crooners like The Prisonaires. Morris says her skin tingles when a song feels right.

"It's like this electric glow. It's all about the goosebumps," she says.

Goosebumps are crucial to learning, and particularly to learning history. Without some form of emotional involvement, the past is a snore.

Reed and Morris are from a generation whose parents listen to Billy Joel andQueen, so these women found their old-timey songs all by themselves. They're no experts on American musical history, but they're working on it. Right now, they're mad about The Ink Spots, who made such an indelible mark on harmonic singing. Reed says songs by The Ink Spots are easy to recognize.

"There's a singy and a talkie, and they always end it with a singy. And I think it's a really sweet formula," she says. "If you listen to an Ink Spots album from beginning to end it's all exactly the same."

"You don't know which song it is 'til they get into the lyrics," Morris adds.

The Kentucky Sisters recently took on an Ink Spots song called "I Don't Want To Set The World On Fire." If they were my students, I'd give them an A.

Gwen Thompkins is a writer and host of the WWNO program Music Inside Out.