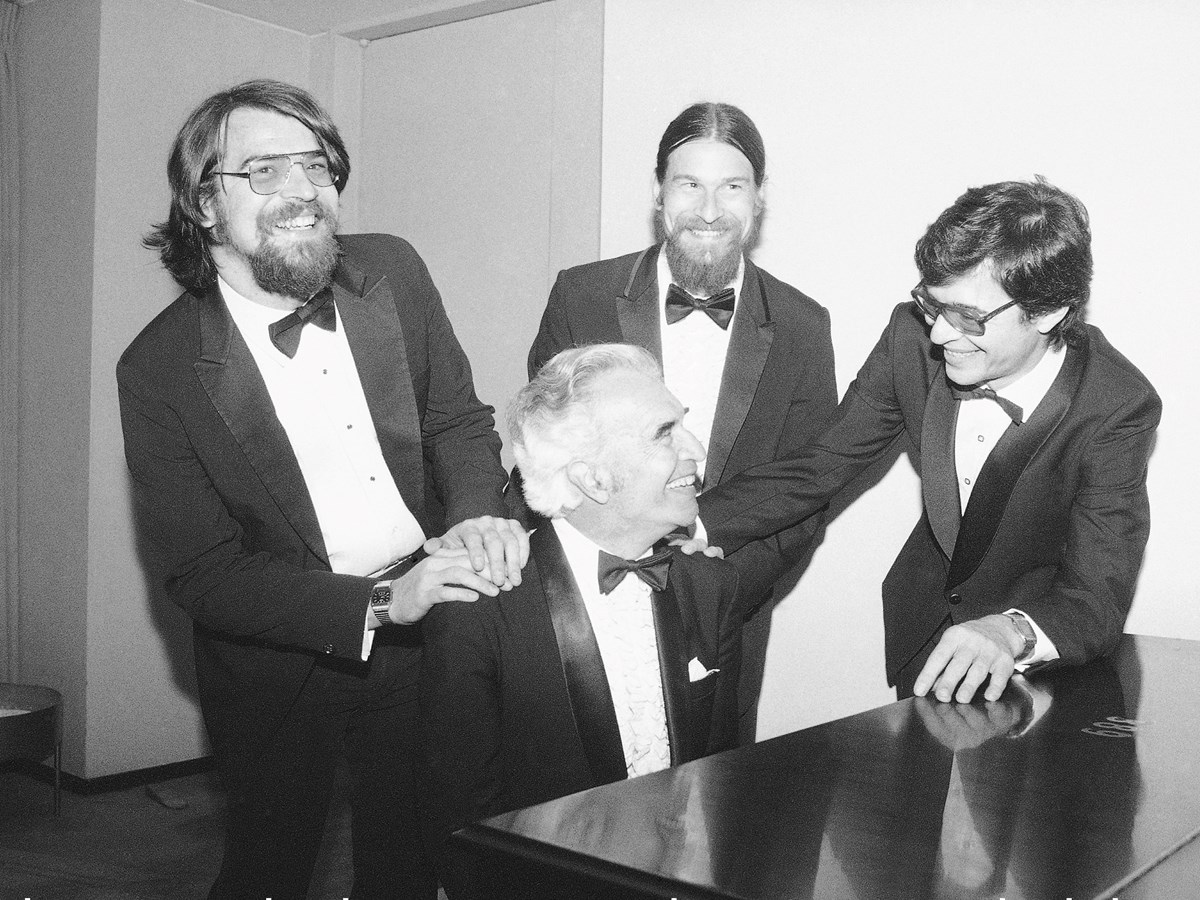 Few names are as synonymous with jazz as Dave Brubeck. The renowned pianist and composer would have turned 100 back in 2020. This year, sons Chris and Dan are finally celebrating the centennial of their late father with a worldwide tour that includes a stop at Sacramento’s Crest Theater on Wednesday.

Dave Brubeck recorded some of the best-selling jazz records of all time. His innovations in composition and especially rhythm continue to inspire musicians today. He took jazz to other countries, and he fought for racial equality in this one. He composed a musical, a mass and even wrote for television. And yet, these accomplishments might never have happened if Dave’s dad Pete had had his way.

The Brubecks lived on a cattle ranch in Ione, California, when Dave entered the College of the Pacific in Stockton, initially as a veterinary student. That didn't quite work out.

“I think he had basically almost blown up the chemistry lab, which was part of learning something about chemistry for veterinarian school,” Chris said. “But, the reason he went to veterinarian school is because his two older brothers had become musicians and he was the last hope for grandpa Pete to have produced a cowboy.”

But like his brothers Howard and Henry, Dave also had a love for music and ultimately decided to pursue it. He got his degree from Pacific, where he met and eventually married his college sweetheart and musical partner of 70 years, Iola Whitlock. She wrote lyrics to many of his works and played a key role in the Brubeck Quartet’s success, booking them on college campuses across the country.

“She’s really quite responsible for trying to get my dad out of smoky night clubs where he’d get home at 3 in the morning smelling like an ashtray and she invented the whole college circuit touring thing for jazz,” said Chris. “She had this notion of, you know, ‘jazz is a little more intellectually demanding than your average country tune.' So, like, ‘where are people that are intellectually a little more demanding on themselves? Ah! They go to college. Let's bring jazz to college.’ So that’s quite an achievement right there, never mind the lyrics that she ended up writing.”

Years before he was a hit on campus, and shortly after he himself graduated from college, Dave got a call from Uncle Sam and was drafted into the U.S. Army in 1942. Chris said it was a turning point in his career.

“I would say that World War II, taking him out of the cowboy destiny into the European theater, which then by happenstance ended up being more of an entertainer than a fighter really changed the course of his life.”

While the Army changed him, Dave also changed the Army, in a way, by forming one of the first racially integrated bands in the armed services. Social justice was important to Brubeck. So was family and music education.

Dave and Iola had six kids, four of whom are professional musicians, including Chris and younger brother Dan, who together lead the Brubeck Brothers Quartet. The group, which also includes guitarist Mike Demicco and keyboardist Chuck Lamb has been touring and recording together for over two decades. In 2018 they released Timeline, a CD honoring Dave Brubeck’s historic State Department tour of 1958. It includes several arrangements of Dave's most famous compositions such as “Blue Rondo A La Turk” and “Since Love Had Its Way” from Dave and Iola’s musical, "The Real Ambassadors."

Growing up Brubeck meant learning to play instruments. For Chris, those would ultimately be bass and trombone.

“But the first thing I played was piano because my dad said ‘I want you to learn how to play piano so you can read treble clef and bass clef and the get the basic idea of what notation is… because who knows young 5-year-old Christopher, someday you might wanna grow up to be a composer and write for orchestra. And then you look at your father and you’re thinking like, you know, ‘What Kool-Aid are you drinking’ there buddy? I wanna be a baseball player.’ But it turns out that he was quite right.”

Not only did Chris learn to play piano, he also became an accomplished composer and orchestrator, and has worked with symphonies around the world in a variety of musical styles.

Music education was important to Dave Brubeck, especially when it came to his family. But according to Chris, he actually struggled as a kid.

“They didn't have the word for it yet, but I think he was dyslexic when he grew up, and even though his mother was a classical piano player who was quite good, my dad really had trouble reading music like Bach and Chopin,” he said “You know, in retrospect I realize that's why he really wanted me to play piano and in fact everyone in our family played piano trying to make up for that factor in his growing up.”

Chris played the piano at first but soon found his calling with the lower end instruments. His discovery came from the ground up, literally.

“My favorite place to hang out when the Dave Brubeck Quartet was rehearsing at our house was I’d crawl under the piano. There I couldn’t be in anyone’s way and couldn’t get stepped on, I could kinda disappear,” said Chris. “And I got to hear the piano in a strange way, from underneath but also got to hear a lot of the bass drum and got to hear the bass too, because Gene Wright would be standing next to the piano. So, I just sort of gravitated toward the bass end of things.”

Chris got plenty of inspiration to play the bass from Eugene Wright during those Quartet rehearsals. As for picking up the trombone, that was pretty much the last instrument on the Brubeck shelf.

“I am the third son, so my oldest brother played trumpet already, that was Darius, and my second older brother Michael played sax already, and so when it came to think of playing a brass instrument it was like, 'well what was left.' And that’s kind of the reason that I played trombone,” Chris explained. “Also at that point I had heard a lot of Trummy Young in Louis Armstrong’s band, and I just liked the nature of the instrument, it also fits my personality.”

Both Dan, Chris and eldest brother Darius performed with their father in various bands throughout the 1970s and '80s. As Chris said, that had a big impact on him.

“I think we all feel that we’re like an extension of what he was doing when he was live, I mean he mentored and taught us not so much formally but just by the osmosis of being on tour with him, you know you just learn learn a lot about music growing up under his happy shadow.”

Chris said he also learned a lot from his dad about connecting with audiences.

“My dad always said that the audience is the fifth member of the quartet, and I know that feeling. When we do concerts I do quite a bit of talking to the audience,” he explained. “I’m happy to say that almost always there are people that come up to me after the concert and say ‘well we really enjoyed the music but oh my god the stories are unbelievable!’”

In December of 2020, Dave Brubeck would’ve turned 100. This Wednesday’s concert by the Brubeck Brothers quartet is a delayed centennial celebration. Chris said it’s also a chance to connect with young musicians as the brothers will hold two workshops earlier in the day.

“We’re working with an organization called Friends Of Sacramento Arts, and so they’re trying to maximize the impact of our presence in Sacramento. We’re gonna be streaming our workshop and probably hitting about a thousand young jazz students in the Sacramento area, both highschool and college age,” Chris said. “And I’m really happy to say that the Rio Americano jazz group is gonna be doing some numbers and opening our concert — that we’re gonna be doing on February 2nd.”

After the Rio Americano High Ensemble opens the concert, the Brubeck Brothers Quartet will perform a variety of Dave Brubeck compositions and originals by the group, with plenty of stories from Chris.

At the beginning of 2020, the Brubeck family created a foundation called the Brubeck Living Legacy with the goal of fostering jazz awareness and promoting social justice through performance, education and outreach. After two years of pandemic postponement their biggest project, the Brubeck Jazz Summit, is set to take place this July.

The weeklong collaboration with Classical Tahoe will feature workshops, masterclasses and performances led by several of today’s top jazz artists. It’s an opportunity for outstanding student musicians to be mentored by world-class professionals. And for Chris, much like his father, nurturing young careers is what it’s all about.

“...But I am always so thrilled when I hear a young jazz player, and I know my dad was too,” said Brubeck. “And you say, like, “wow. Isn’t it cool that these kids got bit by the bug of loving jazz, cause you know once you wet your toes in it and dive in, I mean the rest of your life you’ll be playing and listening and learning and trying to express yourself through music.”

Learn more about the February 2 concert at the Crest Theater.

Listen to a 2009 NPR feature about Chris and Dave Brubeck's collaboration on a composition honoring photographer Ansel Adams co-commissioned and premiered by the Stockton Symphony.