Ear To Ear: Here’s What CapRadio’s Jazz Hosts Are Loving This September 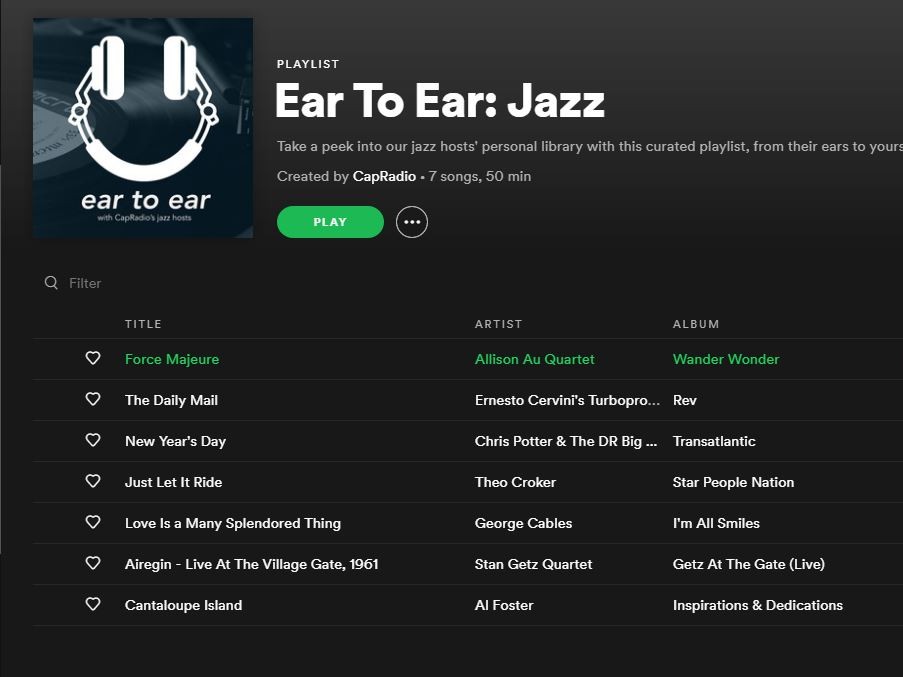 At the start of each month, our music hosts give you a peek inside their personal libraries at the new and old tracks they've been spinning in their free time.

In this month's Ear to Ear playlist, Gary Vercelli shares new music form Sacramento's own Dave Bass and organ master Mike LeDonne. Avery Jeffry continues to share his appreciation for big band music. And Andrew Mills gives us a look at jazz's revolutionary past and future as he celebrates the 60th anniversary of Miles Davis' "Kind of Blue" by highlighting the innovative music happening in jazz today.

Mike LeDonne is widely known as an adept wizard of the Hammond B-3 organ. On his latest album, he also shines on acoustic piano. LeDonne’s all-star trio (with bassist Christian McBride and drummer Lewis Nash) reinvigorate “My Funny Valentine” with a spirited, funk-inspired tempo and soulful presence. Recorded at the famed Van Gelder studio, LeDonne is very much at home with the royalty of his colleagues.

Sacramento’s own Dave Bass’ new album is rapidly climbing the national jazz chart. The recording spotlights Bass as an original composer and pianist capable of delivering clean lines at quick tempos. On “Siboney,” a romantic Cuban song from 1929, Bass and company exemplify soulful lyricism at its finest. Ted Nash on soprano saxophone and Bass on piano transport the listener to an imaginary island of warmth, passion, grace, and beauty.

Latin jazz heavyweight Michel Camilo has a new album out for the first time in 25 years. It's with a big band, and I've mentioned here before that I think big band music is one of the finest representations of jazz out there. Camilo’s collection “Essence” is no exception.

It's a collection of Camilo's work from the past 40 years and was arranged by him along with trumpeter and long time collaborator Michael Philip Mossman. Most of the tracks had only been heard in a piano trio or solo format before, which makes this album even more special.

My personal favorite is “Liquid Crystal.” It was originally recorded and released back in 2007 on an album called “Spirit of the Moment,” and its harmony is really brought to life by the woodwinds and brass on this rendition: Lots of dense voicings and that kind of thing. It features Kali Rodriguez-Pena on the trumpet.

“I Thought About You” — Jazzmeia Horn

Although Jazzmeia Horn has been taking the scene by storm for a couple of years now, I only recently discovered her music through her newest album, “Love And Liberation.” She went from Booker T. Washington High School in Dallas, Texas (The same city I happened to be born in) all the way to receiving her first Grammy nomination this past year.

This new album from Horn is full of soulful originals as well as a few satisfying covers. My favorite tune is the last track on the album and it's also the only jazz standard of the bunch: Jimmy Van Heusen's "I Thought About You." This one is a duo performance between Jazzmeia and her bassist Ben Williams. Being an upright bass player myself, I absolutely love it when a vocal tune can be carried just by a swinging bass line. This album is full of feeling and energy and it's definitely staying in my rotation for a while.

This past month, we celebrated the 60th anniversary of one of the greatest and most influential albums ever recorded: Miles Davis’ “Kind of Blue.” To celebrate this great record’s diamond jubilee, I’m adding some new music to this month’s playlist. I believe these tunes illustrate how much jazz has evolved as an artform, and how much it remains — when at its best — deeply revolutionary.

At 90 years old, drummer Jimmy Cobb is the only surviving member of the sessions that gave us “Kind of Blue.” His latest album, “This I Dig of You,” was released on Aug. 16, and it’s abundantly clear that Cobb remains as fresh and relevant as he was 60 years ago.

On this Dexter Gordon composition, you can hear Cobb’s classic, unassuming sense of swing as he accompanies his bandmates through their respective solos. Cobb’s unrelenting creativity is on full display, however, when he trades solos with guitarist Peter Bernstein and pianist Harold Mabern. This leads into an extended drum solo that is played with such ferocity, it’s almost difficult to believe you’re listening to the same drummer who just provided a beautifully sensitive accompaniment only moments ago. It’s a testament – as it was when he accompanied Davis – to Cobb’s inexorable commitment to innovation, and to the music.

In the United Kingdom, a compelling new jazz scene has evolved. It’s one that thrives on experimentalism and is reaching more diverse audiences. Rejecting the elitist stereotypes often associated with the genre, the London-based jazz movement liberally embraces other genres of music, such as hip-hop, neo-soul, and Afrobeat. Nérija is a mostly female collective of musicians, and a recent addition to this vibrant new scene.

Their latest record, and first full-length album, “Blume” was released on Aug. 2. It embraces all the musical elements listed above, as well as funk, surf-rock, and others to create a uniquely rich aesthetic. This is the first track on the album, and when you hit play, you might think you’re listening to a mid-1960s Blue Note album from Wayne Shorter. However, when the rhythm section enters with a sparse, concrete groove instead of the swing feel you may have expected, you begin to understand something that people came to see the first time they heard Paul Chambers pluck out his iconic intro to “So What” 60 years ago: This is something new. This is something fresh. This is revolutionary.