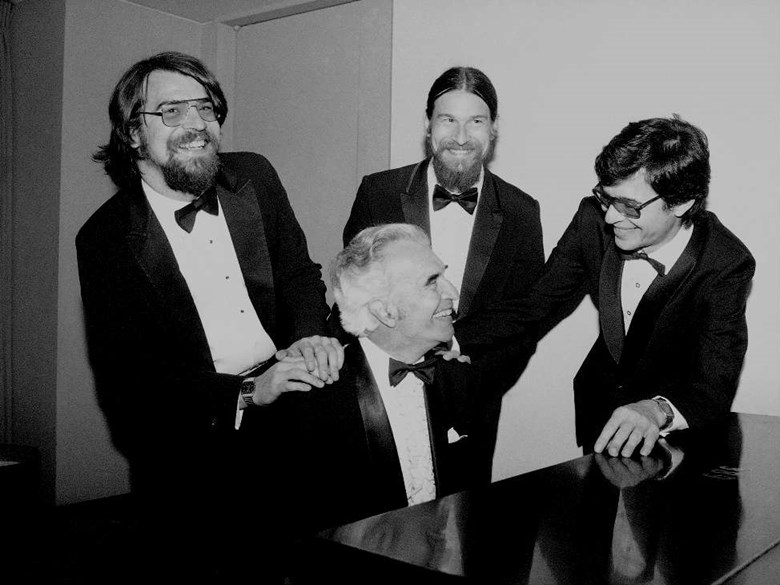 To the world he is known as a pioneering, influential and immensely popular jazz musician, the man whose group gave us "Take 5."

But to his children, Dave Brubeck was a great father. Family was so important to Brubeck that in 1967 he broke up his famous quartet at the height of its popularity so he could spend more time with his wife Iola and their six kids. As Brubeck told documentary filmmaker Hedrik Smith in 2001, "No person in their right mind would want to put their family through what I've had to put my family through. It's a tremendous amount of sacrifice on the part of your wife and your children to get to a point where you can just survive."

On those rare occasions when he wasn't on the road and his kids were still little, Dave made music lessons fun by putting on a disguise. He would come to the door dressed as Professor Nooseknocker, complete with fake nose and mustache, ready to give the day's lesson.

Four of the Brubeck kids -- Darius, Chris, Dan and Matthew -- have also pursued careers in music. They played in their own groups and with their famous father in a later edition of the Dave Brubeck Quartet and in Two Generations of Brubeck.

I've had the priviledge of interviewing Dave Brubeck several times. Whenever we talked about what his boys were up to (or his non-musician daughter Catherine) his eyes would light up. He would go on and on about their latest exploits... collaborations with Yo-Yo Ma, commissions from major orchestras, appearances at jazz festivals, humanitarian work in Haiti.

More than just a proud and supportive father, Dave was an occasional collaborator with his kids. Even as he was nearing his nineties he was discovering new things about them he admired. I found that out when I interviewed Dave and son Chris about the composition they co-wrote inspired by the work and life of photographer Ansel Adams. Dave was impressed by how skilled Chris had become as an orchestrator. Likewise Chris gained a deeper appreciation of his father and his tenacious work ethic as they teamed up on "Ansel Adams America."

On this Father's Day, I hope you'll enjoy revisiting this story that originally aired on All Things Considered in 2009.

Finally, here's a note from Chris Brubeck about the upcoming premiere of a work he co-composed honoring his dad:

"Brothers in Arts: 70 Years of Liberty" was co-written by me and by Guillaume St. James in honor of the 70th Anniversary of the Liberation of France. It tells our fathers' stories surrounding those events 70 years ago.

Guillaume's father was a young boy, whose life was saved when US field doctors performed an emergency appendectomy on him. The young boy heard American jazz while recovering, and later became a country doctor and amateur musician.

My dad was in General Patton's army and came through Normandy after D-Day. An Army captain heard Dave playing piano and had him form a band - The Wolf Pack Band - which toured with the USO shows. It was also the Army's first integrated band.

"Brothers in Arts: 70 Years of Liberty"  was commissioned by the Orchestre Symphonique de Bretagne, and will be premiering it in Rennes, France on Thursday, June 12 and Friday, June 13, 2014 with a repeat performance on September 19, 2014 for the celebration of the Liberation of Rennes.  Co-Commissioning Orchestras are the Sinfonia Gulf Coast, Fort Walton Beach, Florida and Oakland East Bay Symphony, Oakland, California with performances scheduled for November 1, 2014 and November 7, 2014, respectively.