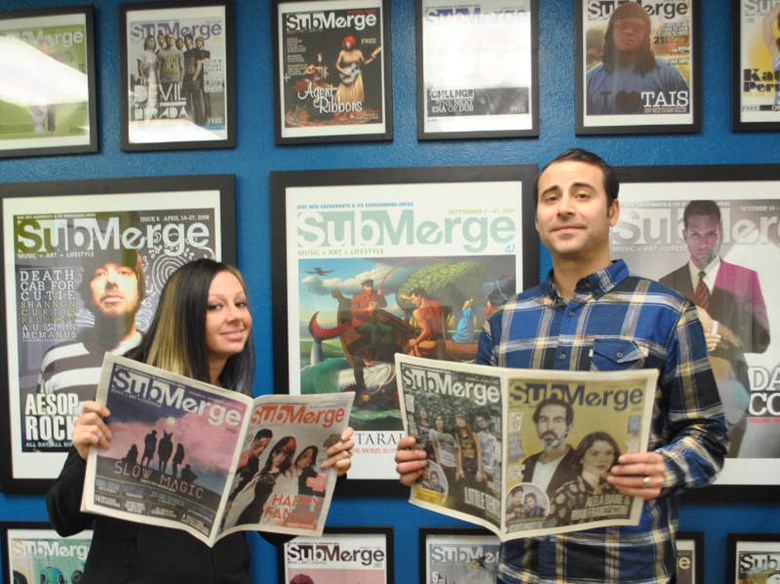 People told them they were foolish, print was dead, it would never work and advertisers weren’t spending money. That didn’t stop Jonathan Carabba and Melissa Carabba-Welliver from bootstrapping a bi-weekly arts and culture magazine.

That was 2008, this month they’ll put the finishing touches on the 200th issue of SubMerge Magazine.

“We just had to try,” Jonathan says. “We had something in us we had to get out.”

When they released the first issue, local indie band Agent Ribbons graced the cover. Jonathan had already wrangled a couple advertisers, which covered some of the printing costs - they paid the rest themselves. Jonathan was 23 at the time, Melissa was 27. They’d been dating for about two years, yet these young upstarts impressed readers and advertisers across the region.

“We did get a lot of ‘Who owns you?’ because the quality of the product we were putting out was so good,” says Jonathan.

The 30-page magazine features two covers with big color photos of the subjects.

They both believe in the medium and love the physical nature of print.

“Everyone is still reading,” says Melissa. “When TV came around people didn’t stop listening to the radio. I think people always want to read about other people. Everyone has a story to tell.”

“Print is always going to be fine but on a regional scale,” says Jonathan. “SubMerge fits into that category really well.”

Melissa says there are a wealth of national touring acts coming through town and a vibrant local scene, “to combine them, I thought, would make the perfect publication.”

Every story in SubMerge is closely tied to a live event in the region, like a national act coming through town. Jonathan and Melissa say they’re “weirdly obsessive” about timeliness; they won’t publish a story about a local artist until there’s a news hook.

“Over 200 issues our formula hasn’t changed much -- I think that shows our vision right off the bat was pretty solid. If you pick up SubMerge and flip through it, it becomes this resource for creative things to do in the region.”

Before starting the magazine, Melissa worked in magazines and newspapers and had a lot of insider knowledge. Jonathan primarily works with advertisers. They both wear a lot of hats -- all the hats in fact.

Armed with the copies of the first issue, Jonathan says he was able to double their advertisers in two weeks. The couple didn’t make enough to quit their day jobs for about four years. They grew the business on nights and weekends without outside financing.

Local writer and performer Niki Kangas has written for SubMerge for years. She says one of the reasons SubMerge works is because of Jonathan and Melissa’s love for the city.

“Jonathan and Melissa genuinely love Sacramento, and it shows in their tireless coverage of everything that makes our community special,” says Kangas. “Working with them is always fun, and every time a new issue hits the stands I can't wait to read it, cover to cover.”

Proud to release issue 200 featuring original cover art by one of Sacramento's finest SHAUN BURNER! Be sure to pick up...

They will celebrate the 200th Issue of SubMerge with a free party at LowBrau on Sunday, Nov. 15, featuring new music from the SunMonks, a performance by "Super Contra," a six-piece live supergroup made up of members of Doombird, Dusty Brown and Tycho!, DLRN and Joseph in the Well.