An estimated 9,500 people attended City Of Trees on Saturday at Gibson Ranch.

08/17/15 Update: Gibson Ranch operator and former California Congressman Doug Ose responded to complaints regarding the venue's accommodation for the City of Trees music festival this weekend.

In a statement Monday morning Ose wrote,"Unfortunately, we made some mistakes. We want our customers, friends and supporters to know how badly we feel about these failures, that we recognize them as failures and that we are determined to not repeat them."

Ose said as the venue, they were responsible for trash collection, lighting in the parking areas and adequate number of restrooms.

Ose admitted during the event trash collection was poor, there was not enough light in the parking areas, not enough bathrooms and the exit capacity was limited due to unexpected pedestrian traffic.

Ose ends the letter with, "We will do better. Again, thank you for attending."

After a day of music, food and sunshine at Gibson Ranch, headlining home-town heroes CAKE played attendees of the first City of Trees music festival off into a long line of cars and a traffic nightmare.

A freshman festival at an untested venue can get a few passes when things don’t go right. City of Trees organizers ran out of water several times, folks waited in 40-minute lines to get food and beer, and the photo booth didn’t have power. But the music was great, the stage and sound set-up were well done, and the overall vibe was positive.

Veteran concert promoter Jerry Perry was among those enjoying the music. In 1997 he booked CAKE for a sold-out show at Sacramento's Memorial Auditorium. Perry said he was impressed with the first-year fest. 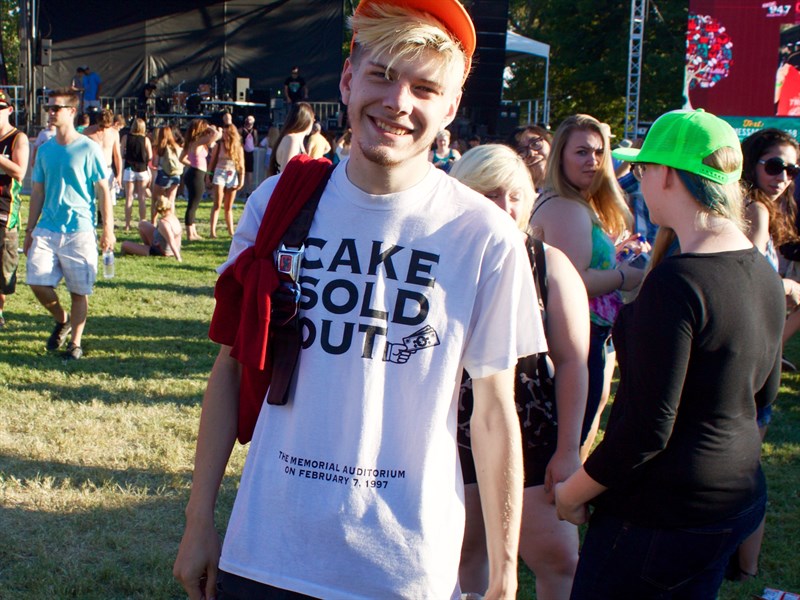 “This is huge, it takes an army to put on something like this. I think the venue looks great. There’s a lot more shade than I expected,” said Perry, who was surprised by the layout but thought it worked well. “I’m giving this a big thumbs ups. There’s a few hiccups, everything is a learning curve. They ran out of water at the water stations, but they refilled."

Clay Nutting, the co-founder of the homegrown boutique music festival, TBD Fest, also made the trek to Rio Linda to attend City of Trees. He too was impressed.

“It’s awesome. I’m glad that they’re doing this. It’s very eclectic. The music has been incredible and the audience is super into it,” said Nutting during Of Monsters And Men's set.

Six-year-old Kylie and her dad Will Nitsky drove all the way from Chico for the show. They were dancing on the grass to DJ Lazyboy before CAKE went on.

“Of Monsters and Men were amazing. They played all the greatest songs,” said Nitsky. Kylie said her favorite band is CAKE. 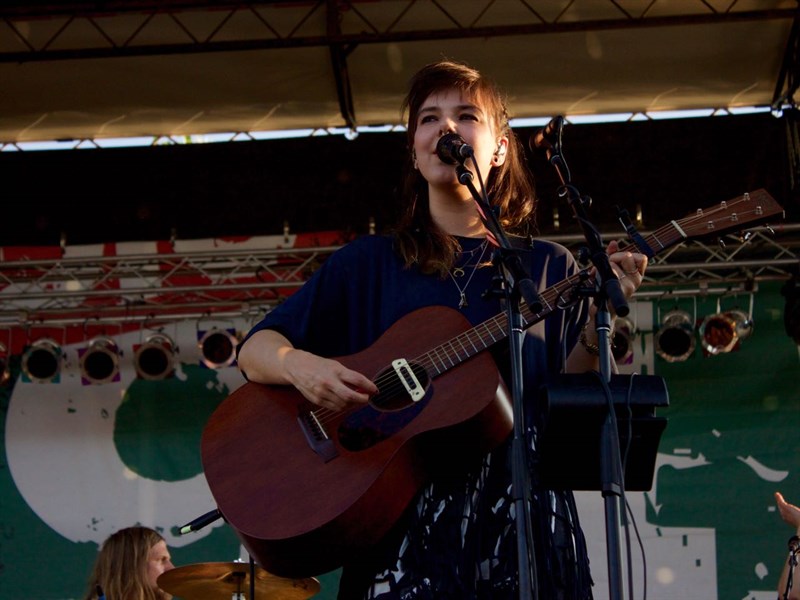 Early in the day Todd Speelman, events director for Entercom Radio, the organization that put on City of Trees, said things were going smoother than expected.

“We’re super excited about the amount of people that are here. We’re keeping them hydrated with free water.”

Speelman said around 9,500 people attended the festival, which well exceeded their expectations of 6,000.

Gibson Ranch was chosen as the site for City of Trees because, unlike other outdoor venues that are doing fewer events, Speelman said Gibson Ranch is seeking to attract more. “They make it affordable to do something here and the wide open space allows us a lot of good opportunities.” 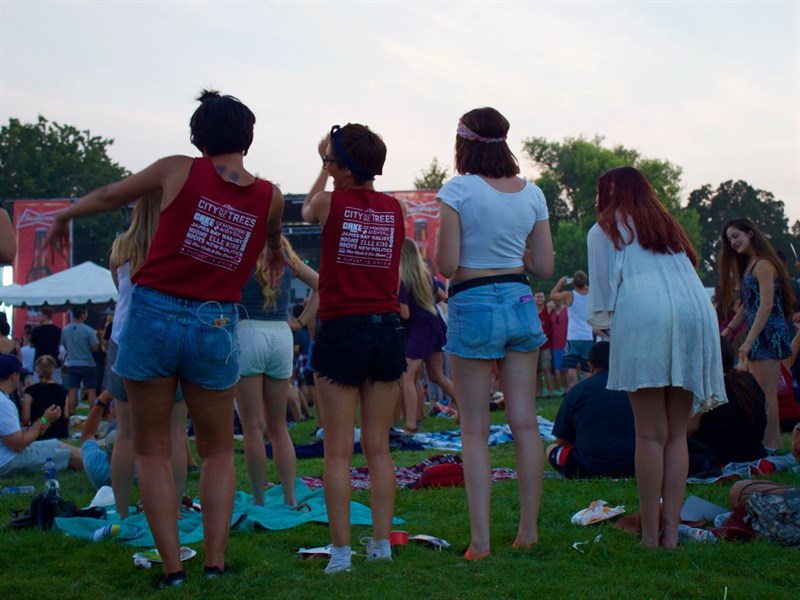 Organizers built a small city on the ranch grounds, including two large stages in front of a giant grassy open space, food trucks and beer stands in the back and along the sides, and one, lone water filling station.

The “music discovery” stage featured up-and-coming acts like Elle King, The Moth and the Flame, and Night Riots. While the larger acts played the main stage.

Early on Saturday only the brave of heart and heat-tolerant ventured near the stages. The majority of the crowd clung to the minimal shade provided by the surrounding trees on the sides.

Once it cooled down after the sun slipped behind the trees, attendees moved into the center of the grassy field and danced to Of Monsters and Men's whimsical Icelandic pop. 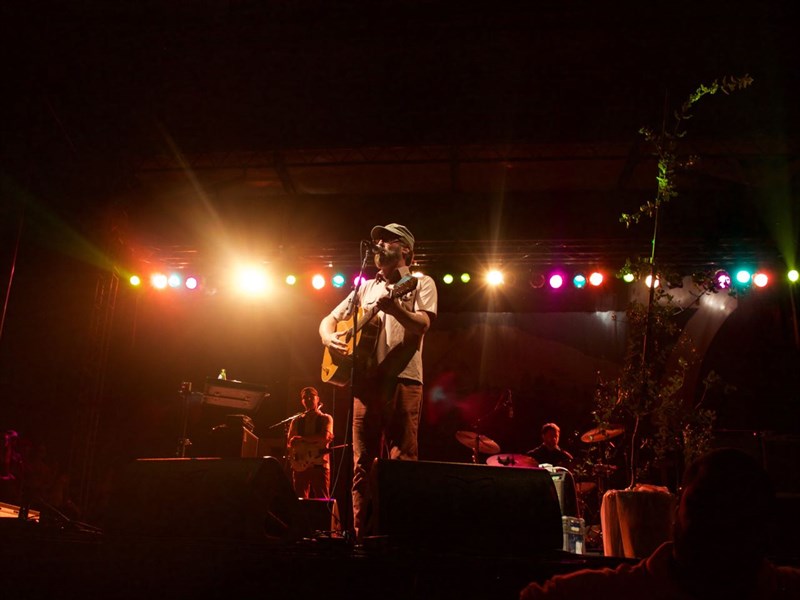 CAKE has a custom of giving away a tree at their shows and City of Trees was no exception. The sapling sat on the stage for the better part of the set until it was gifted to a lucky attendee to be planted and lovingly cared for. Melody Stone / Capital Public Radio

When CAKE took the stage there was a noticeable exodus of younger people. That may come as no surprise since the alt-rockers haven’t had a major hit since 2001’s “Short Skirt Long Jacket.” Most of the remaining thousands knew all the words and those who didn’t picked up quickly during lead singer John McCrea’s trademark sing-along sessions.

At festivals like this one it’s not uncommon for people to leave during the headliner's set in hopes of beating the traffic. Toward the middle of CAKE's set people started stumbling into the darkness; stumbling because there was no light and the ground was uneven and filled with giant holes. As attendees rounded the corner to the far end of the lot they were greeted by a line of taillights as far as the eye could see.

The complaints got so bad #CityOfTrees started trending on Twitter:

Trending bc attendees have been angrily tweeting about being stuck in traffic for 3 hours. #nailedit #cityoftrees https://t.co/RKHY0R4xCa

The general consensus was the music was great, there wasn’t enough shade or water and getting out of the parking lot was miserable.

Music festival was good. 100 degrees out and they ran out of water and shade and getting out was hell but #CityOfTrees was nice

But not everyone's day was ruined:

Had a great day at #CityOfTrees (despite the heat). Thanks @Radio947 for having an awesome lineup & especially for having @JamesBayMusic

The next big event scheduled for Gibson Ranch is the two-day hard rock music festival known as Aftershock. Last year Aftershock drew 37,000 people. This will be the first year Aftershock will take place at Gibson Ranch and if anything can be learned from City of Trees it's that the parking situation at the venue needs serious attention.