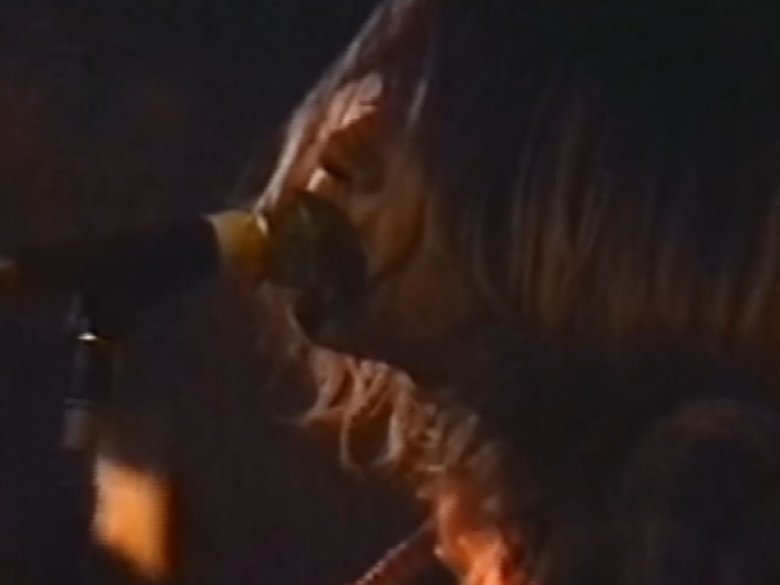 Still from Nirvana live at the Cattle Club in 1990.

The iconic grunge band, Nirvana, played Sacramento three times before the lead singer’s death in 1994. The first performance took place at a little venue on Folsom Blvd. called The Cattle Club on February 12, 1990.

Concert organizer Jerry Perry had heard the band’s first album, Bleach and knew he wanted them in for a show… but he didn’t know much else about the Seattle-based group. 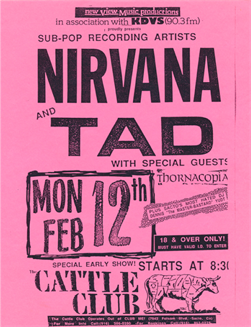 “We didn’t know what to expect, we didn’t know how old these guys were or anything,” said Perry. “They were cool guys, fun guys.”

It was a Monday night and there were about 65 people in attendance.

“It was just an explosion. They were this little band out of Seattle,” Perry said. “It was a great time. You felt like there was this roar coming back into the music scene. Here came Nirvana and it was really something. I loved them instantly.”

With a lot of Cattle Club shows there was a video camera set up in the corner of the stage. This night an electrical cord bisected the frame. Fortuitously, Shayne Stacy was also shooting video from the front of the crowd.

In 2010 Perry’s friend, Jim McLain, took both recordings and pieced them together along with an audio-cassette recording from that night. The sound is woven together from all three sources and the images go back and forth from Stacy’s hand held to the wall mount.

It all comes together to form what Perry believes is the first two-camera video of a Nirvana concert. It was the seventh show of the band’s first tour, which Perry screened at the Crest Theatre Sunday afternoon.

“There was no knowing where things were going to go in the next three years, and how these guys were such a vital change in the music industry. But at that moment it certainly suggested bigger and better things to come. It was pretty amazing,” said Perry in his introduction to the film.

Nirvana came back in August of 1990 to open for Sonic Youth at the Crest. They played the following year as an opener for Dinosaur Jr, also at the Crest.

“Nirvana outdrew [Dinosaur Jr.] like crazy,” said Perry. “This was just a grassroots explosion these guys were riding. When they finished half the crowd left... About five months later they put out [the album] Nevermind.”

It was at the Dinosaur Jr. show that Nirvana was left alone in the dressing room with a can of green paint and proceeded to make a giant mess - leaving behind green footprints on the wall. Those footprints remain there today, leaving a little piece of Kurt Cobain in Sacramento.

After the Sunday screening, ushers escorted groups into the basement to pose with Cobain’s footprints. 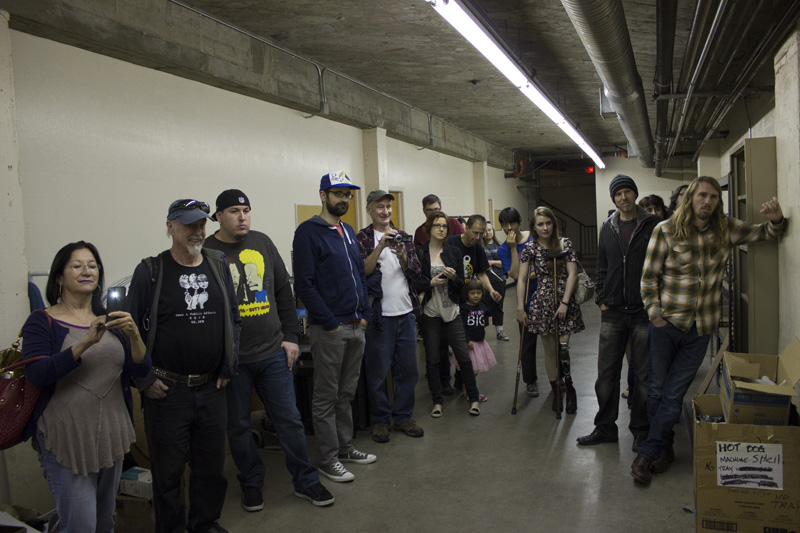 The crowd looking at Kurt Cobain's footprints in the basement of the Crest. Cody Drabble / Capital Public Radio 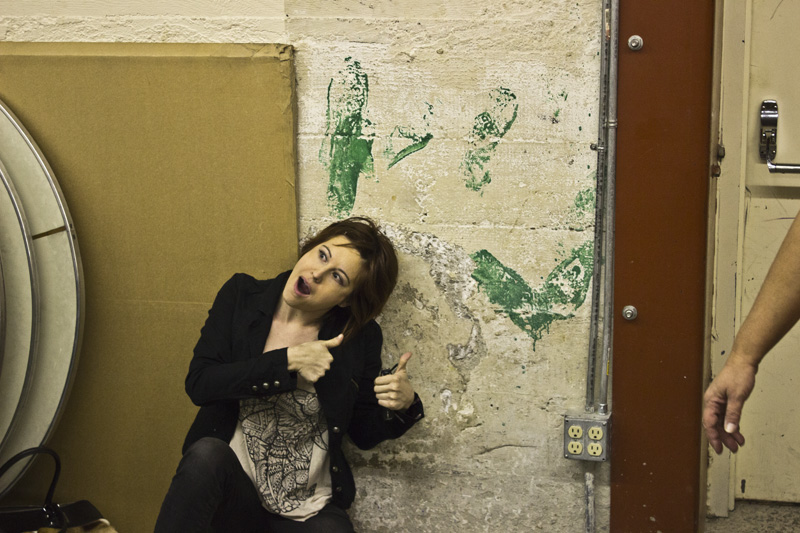 It was clear from the turn-out for a last-minute screening of a 25-year-old camcorder recording of a concert - Nirvana still resonates with a lot of people. 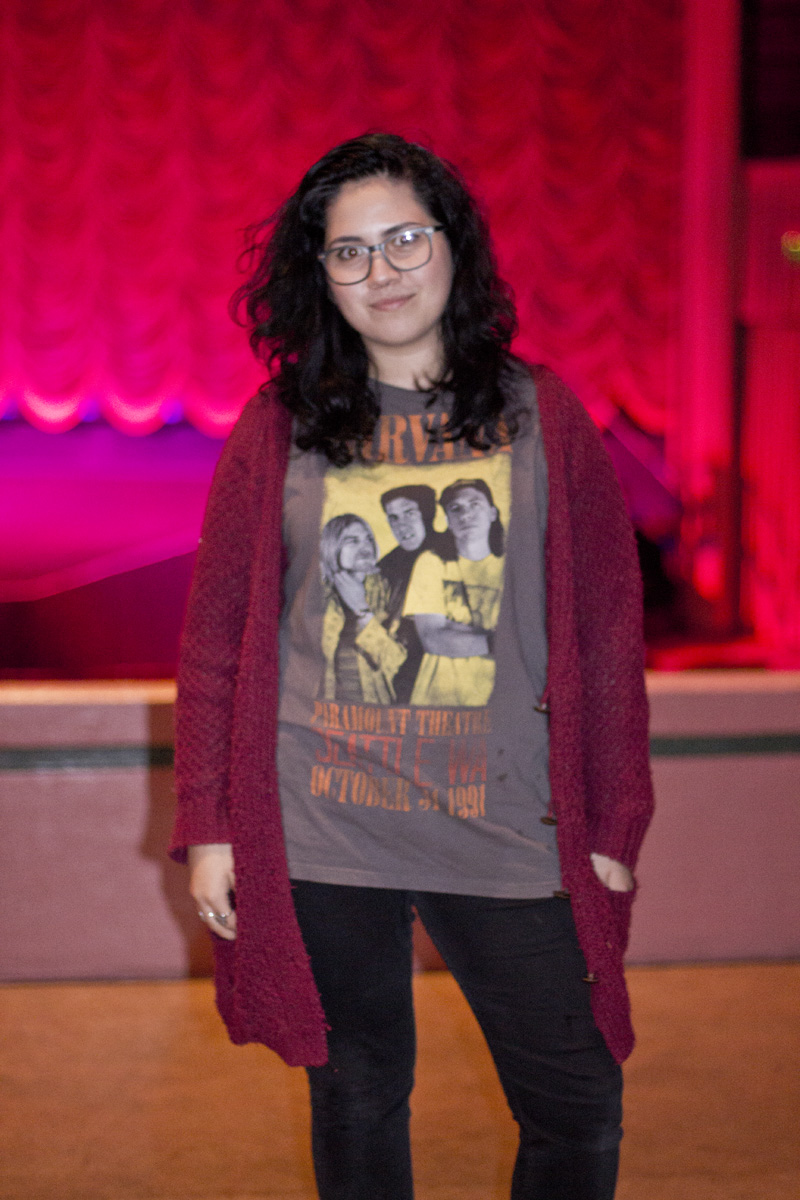 Michelle Garcia, 22, grew up watching MTV in Venezuela and was in attendance on Sunday.

“Once we moved to America I was closer. I could get the records, get the CDs, watch the videos, buy the movies. My goal is to get really close to Nirvana, as much as I can. I flew to Seattle, went to Kurt Cobain’s house,” Garcia gushed before the show. “He always seemed like a family member to me. When I visited his house it was like visiting an old friend, old family member… It was kind of closure.”

Garcia was 2-yrs.-old when Cobain died, she points out she’s the same age as his daughter. She attended the screening with her boyfriend, in hopes he will understand her a little better.

“These are the little bits of Nirvana that I will ever get.”

Sean Kilcoyne brought his 14-year-old daughter, Alice, to the show.

“She’s recently become a big fan, probably just as big a fan as I was when I was her age,” said Kilcoyne. “I never saw Nirvana live, this is the closest I’ll get to ever actually seeing them in Sacramento.”

Indeed, Alice says she is a big Nirvana fan.

“I like how original they are. I like how open he was. How dark he was,” Alice explained what she loves about Nirvana.

Perry originally wanted to screen the remastered, recut, version of the film on the 25th anniversary of the concert, which would be next February. But with the management of the Crest changing hands at the end of this month, he wanted to get in one last show with the people who helped him bring these big acts to town 25 years ago.

“The gang opened the place to us. We had a long history working with them over the years,” Perry said about Crest manager, Sid Garcia-Herberger and her team. He talked about being able to book unsigned local bands at the Crest and sell out the venue.

“Look at this place, Imagine a local band headlining,” explained Perry. “That’s what the Crest Theatre allowed us to do they gave us a place where we could grow from our little Cattle Club. There was a gold ring to reach for... They made it so great. I cannot thank them enough.” 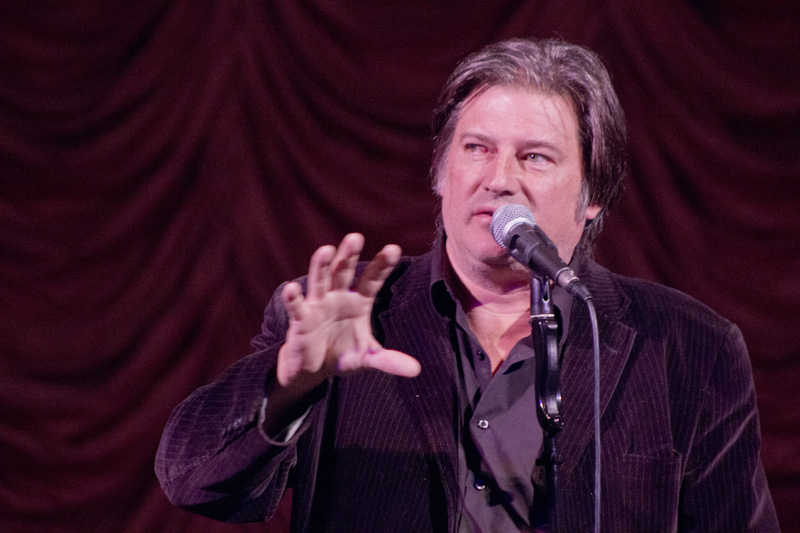 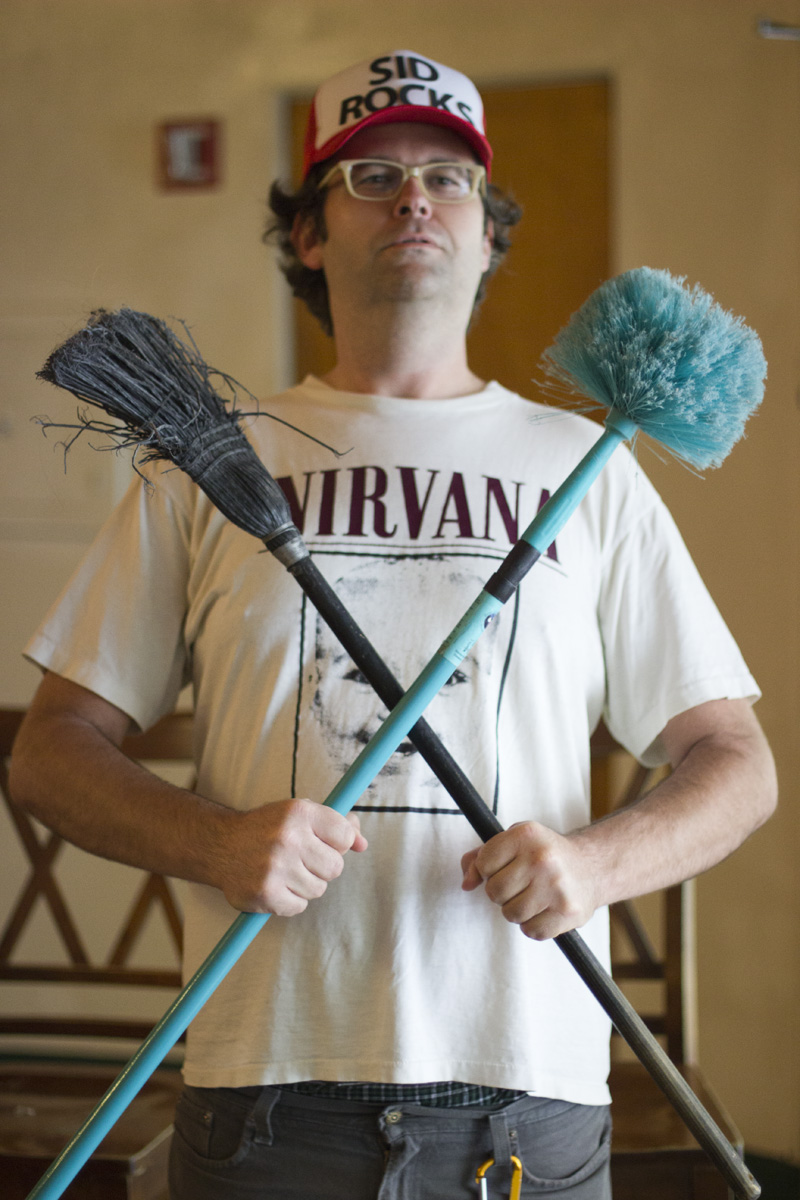 Garrett Breedlove works at the Crest and sported a his support for the theatre's current management on his hat. Cody Drabble / Capital Public Radio
Here are a few exclusive tracks from that show. Perry said they'll never put that footage on Youtube, saving it for free screenings like the one at the Crest.