Michael Morgan, the longtime music director for the Sacramento Philharmonic and Oakland Symphony.

Michael Morgan, the longtime music director for the Sacramento Philharmonic and Oakland Symphony who strived to have his organizations better represent the communities they served, died last week from an infection following a kidney transplant. He was 63.

“[Morgan] held this position proudly,” said Sacramento Philharmonic Executive Director Alice Sauro, “bringing a wide range of programming to the Sacramento region... We were fortunate and grateful that he took the time to develop this orchestra, many members who are on the roster today. The Sacramento Philharmonic & Opera remembers Michael for his grace and professionalism, and was proud to have him serve as our Music Director Emeritus."

Michael Morgan came on the scene with the Sacramento Philharmonic in the late 1990s, after the Sac Phil and their previous music director abruptly parted ways, according to CapRadio freelance arts reporter Jeff Hudson.

“Morgan, who was the conductor at what was then known as the Oakland East Bay Symphony, was summoned on short notice to lead the Sacramento Philharmonic in a concert that featured a Brahms symphony as its centerpiece," recalls Jeff Hudson. "The concert was a success, and Morgan — who basically saved the day with his assured baton work — soon became Sac Phil’s music director, while retaining his Oakland post.” 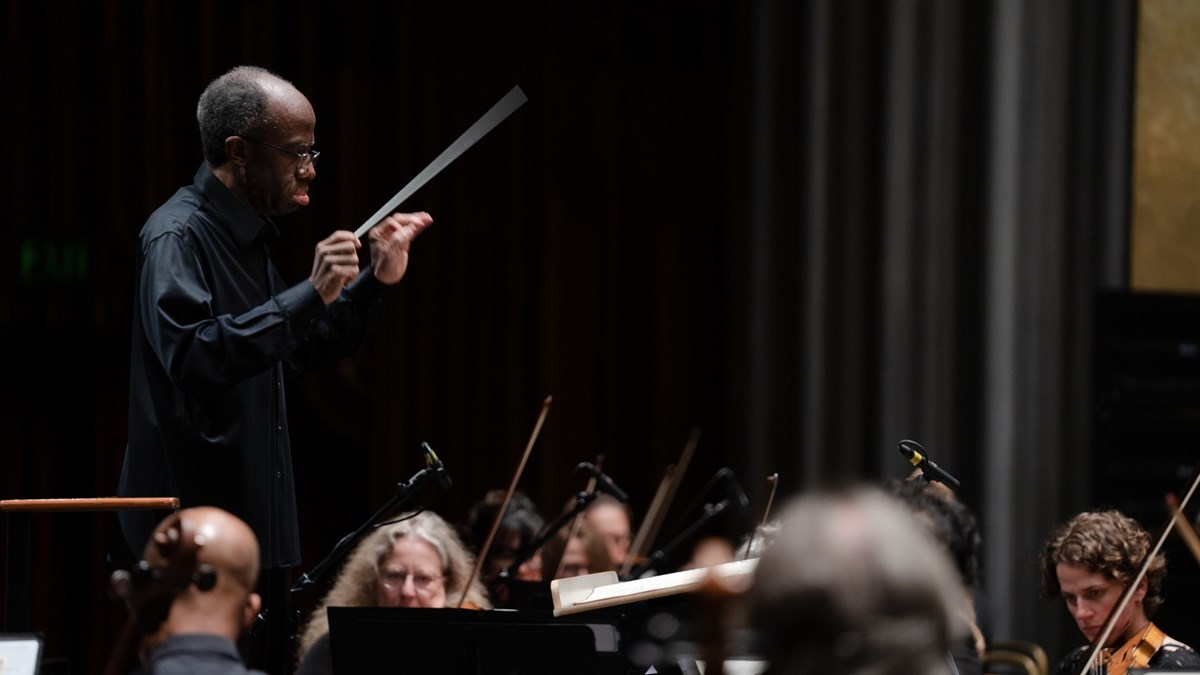 Morgan’s tenure with the Sac Phil is just a small part of the impact he’s made in the region. His main gig was as the Music Director for the Oakland Symphony, which he landed in 1991, a position he held for 30 years.Courtesy Alexander Lim

As a conductor, Morgan believed the orchestra, especially smaller orchestras, should strive to represent the communities they served.

“If you can manage somehow to make what you do reflect your community, it’s going to be different than what the San Francisco Symphony does,” he told CapRadio’s Jeffrey Callison in 2005. “For example, we’ve done composers from both Sac State and from UC Davis on our various programs. You really do shape the orchestra to fit its community. Then, of course, there is all the outreach and educational work which is really unique to your community.”

Morgan’s tenure with the Sac Phil is just a small part of the impact he’s made in the region. His main gig was as the Music Director for the Oakland Symphony, which he landed in 1991, a position he held for 30 years.

“This is a terribly sad moment for everyone in the Oakland Symphony family. We have lost our guiding father,” said Oakland Symphony Executive Director Mieko Hatano. “He made his Orchestra socially authentic, demanded equality, and he made his Orchestra our orchestra. He fashioned a unique, informed artistic profile that attracted one of the most diverse audiences in the nation.”

Morgan was known for innovative, inclusive, and engaging programming that included a “Notes From…” concert series exploring the music and musicians of Vietnamese, Korean, Native American and LGBTQ+ communities to name a few. He even invited notable personalities like comedian-activist W. Kamau Bell and labor leader Dolores Huerta to curate playlists for the orchestra to perform.

Bell commented about the experience on Twitter saying “When Michael Morgan came to me w/ the idea of curating a playlist for the ⁦@OakSym it felt like a gift! That night was incredible. People still come up to me & rave about it. He was committed to making sure symphonies were for everyone.”

So sad. When Michael Morgan came to me w/ the idea of curating a playlist for the ⁦@OakSym⁩ it felt like a gift! That night was incredible. People still come up to me & rave about it. He was committed to making sure symphonies were for everyone. https://t.co/hoMSsLdHEa

Those who worked with Morgan often touted his larger-than-life personality and his meticulous work ethic. Cellist Susan Lamb Cook, who performed regularly under Morgan, said “although Michael has been gone from the Sacramento Philharmonic for at least five years, his presence continues to be felt in many ways ... He was very demanding of the musicians and quite a perfectionist, it was not always easy to get through his rehearsals but when the concerts came, the end results were thrilling. He made a great impact on so many, and will certainly be missed.”

Born in Washington D.C. in 1957, Morgan began conducting at the young age of 12. He went to the Oberlin College Conservatory of Music in the '70s and it was around that time that he attended the Tanglewood Music Center in the Berkshires.

While at Tanglewood he studied with conducting legends Gunther Schuller and Seiji Ozawa and even had an opportunity to work with Leonard Bernstein. Bernstein would invite Morgan to conduct the New York Philharmonic less than a decade later in 1986. That same year Morgan served as assistant conductor to George Solti and Daniel Barenboim in Chicago.

In addition to his duties with the Oakland Symphony and Sacramento Philharmonic, Morgan was also the Artistic Director for the Oakland Symphony Youth Orchestra, Music Director at Bear Valley Music Festival, and Music Director of Gateways Music Festival. Morgan also sat on the boards of Oaktown Jazz Workshops and the Purple Silk Music Education Foundation. He even made his conducting debut at the San Francisco Symphony last month, one of his last public appearances.

Because of Morgan's commitment to diversity and inclusion in his concert programming and his work with underserved communities, Morgan was set to receive the Lifetime Achievement Award from Sacramento’s Living Heritage Foundation which recognizes arts and media professionals who specialize in presenting works by or about African Americans and women of note. The award was to be given at a concert in May of 2020 which was canceled due to COVID-19. It will now be awarded posthumously at an Oakland Symphony concert in January of next year.

The award comes with a significant financial prize that will now go to the Oakland Symphony. Initially, Morgan refused to take the money for himself. Founding Executive Director Susheel Bibbs says she insisted he take it but that he could pay it forward as he saw fit. This compelled Morgan to take philanthropic action of his own and return the favor almost tenfold. Posting on social media, Bibbs said “he called (Bay Area) foundations and encouraged them to give our Living Heritage Foundation 10 times more than we were to offer him. Such a man of generosity and kindness.”

Victor Forman and Jeff Hudson contributed to this article.